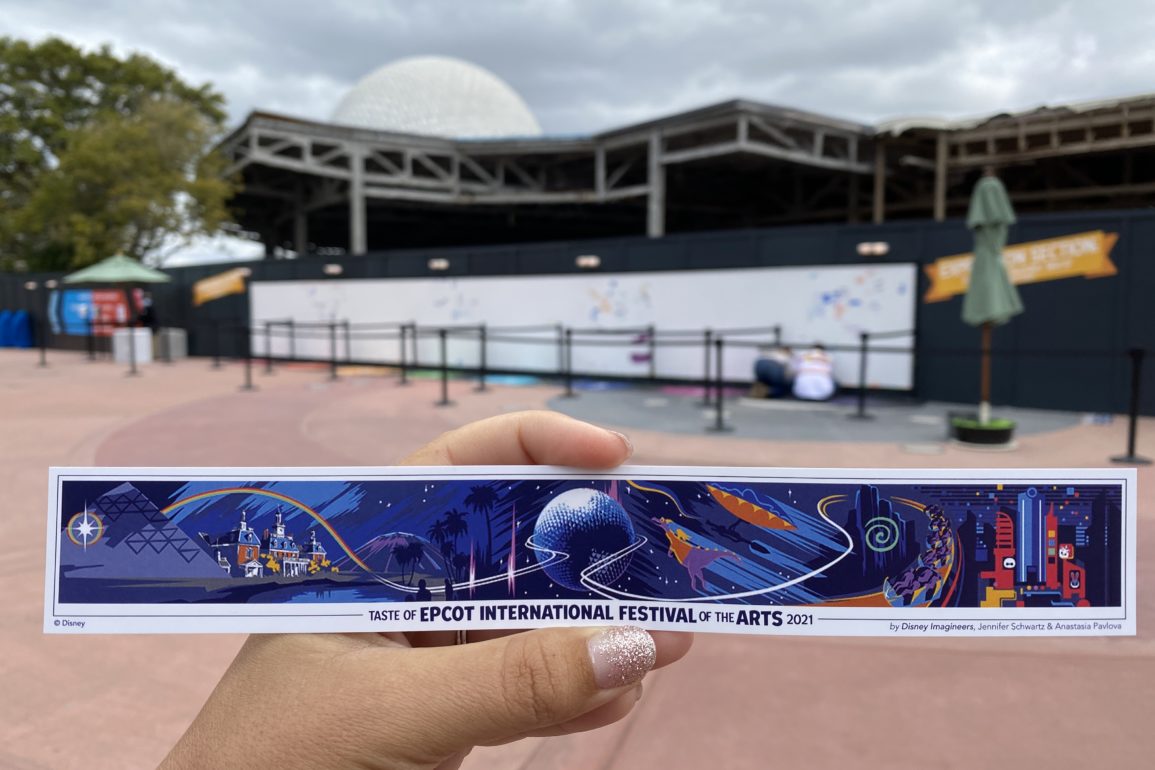 Greetings, World Travelers, and welcome to a lovely, if not wacky weather day here at EPCOT! It started out a somewhat comfortable 62 degrees this morning, but as the day progressed it only got colder and windier until the best word we could use to describe it would be “raw”. We took advantage of the morning to check out what what was new at the park though, and we found some things we’d like to show you, so let’s get started!

With construction our priority first thing in the morning, we found a couple of projects to update you on. New glass panels have been added to the exterior at the future location of Mouse Gear. We saw the metal framing for the bottom of this window added late last week.

A worker was spotted on the roof of La Gelateria in the Italy Pavilion this morning, working on the building’s facade. The little chimney on the right was most recently finished.

We found a worker painting the base of one of the columns at the entrance to the Italy Pavilion early in the morning.

Later in the day we got to see the two bases in a similar light, and the color difference was noticeable. We expect the second base to the painted soon to match.

We saw a new canvas being installed at the Expression Section early in the morning, and came back later to see if it was the same or different art than last time.

We were greeted with new art today, making this the third new piece of art at the Expression Section.

The character flats are still in place in the final scene of Gran Fiesta Tour. It’s strange to see these two dimensional pieces in the place of the familiar animatronics. The first view of them is especially jarring, as you can see here.

The video in the Rally of the Gazelles exhibit was on again today, after we saw if off last week. This particular piece of the exhibit seems to be an on-again-off-again feature.

Nearby in the Art of Disney location in American Adventure, we found this fun display of “Soul” merchandise to keep the jazz theme going.

We found a new Festival of the Arts shirt at the World ShowPlace festival merchandise booth. This shirt retails for $29.99.

At Mouse Gear, we found a new dusty blue zip up hoodie featuring a classic Mickey Mouse on the front and the Walt Disney World logo on the hood. It retails for $54.99.

We found new cosplay shirts at Stein Haus in the Germany Pavilion for those wanting to wear classic German dress without all the fuss. The first one is this women’s shirt featuring a printed drindl dress for $36.99. We love all the hidden Mickey’s!

Next, we found the coordinating men’s shirt of a printed lederhosen for $29.99. Both shirts have textured details over the stitch marks, and feature the new EPCOT logo.

We found two new additions to the Chinese New Year merchandise line today, including this paper pocket set available at House of Good Fortune in the China Pavilion for $9.99

We also found this adorable mug, complete with lid bearing his ears, for $19.99.

Last but not least, we found this new Stitch ear hat. For more pictures and information, check out our article here.