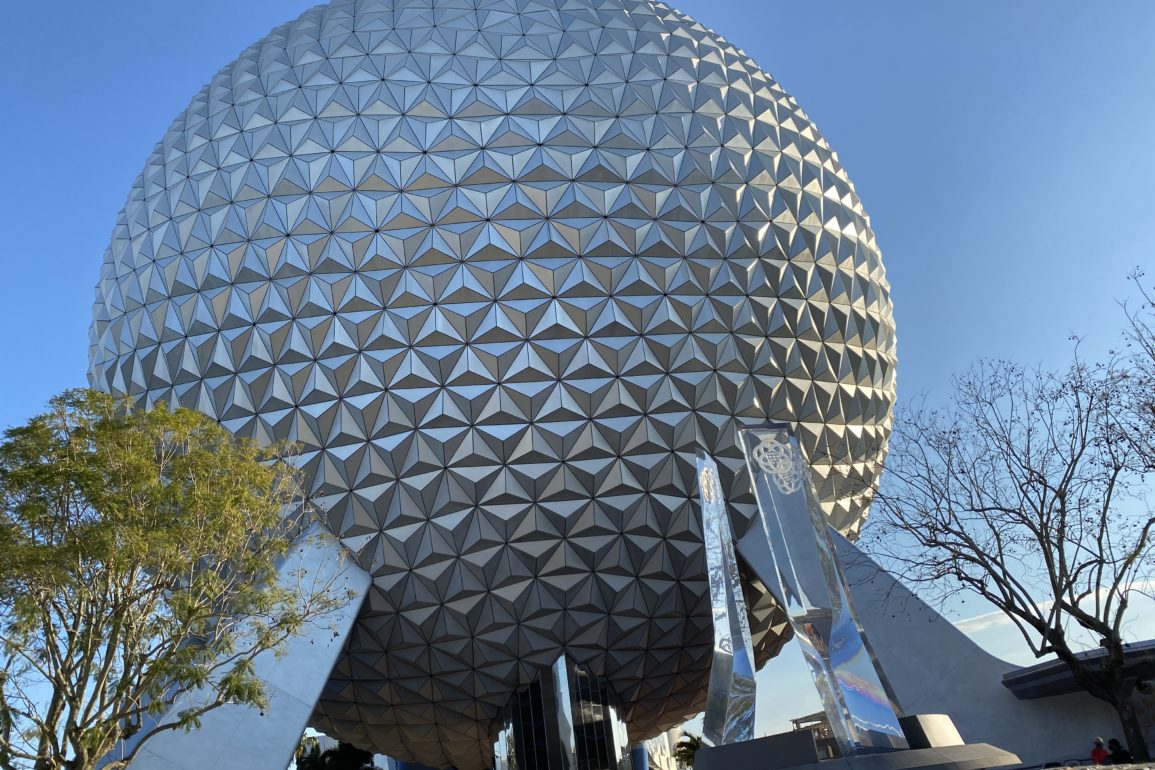 Greetings, World Travelers, from a beautiful day at EPCOT! It feels like it’s been quite a while since we’ve been to this international park, and we were excited to check out what new things we could find here. Let’s get started!

Immediately upon entering the park, we saw that the first set of flagpoles had been installed near the entrance, just to the left of the entrance fountain. For more pictures and information, check out our article here.

We found work being done in the Butterfly Garden, with planters having been brought in on pallets, ready to be placed. We’re excited to be able to see what it will look like when it’s finished next week!

Floating planters have arrived all around Future World, giving even the waterways a fresh, colorful look.

Over by World Showcase Lagoon, we noticed that the tent that was reportedly being used for Harmonious testing had been removed, and this area is now open to guests once more. We wonder when we’ll see another of the Harmonious show pieces appear on the Lagoon.

Imitation beehives have also arrived surrounding the Honey Bee-stro Festival Booth to complete the theming of this area.

Nearby, we got a peek into the scrim surrounding the play area next to Traveler’s Cafe. It appears that some wooden framing has arrived, and the majority of the astroturf has been put back into place.

We also noticed that the theming had been removed from the play area in FutureWorld East. Decals of “Toy Story” character had been on several of the pieces of the equipment until recently, but even though this are remains closed, it looks like they wanted to return this area to a clean slate.

We found the “Lion King” topiary had been installed near The Imagination Pavilion last night. We are enjoying spotting these familiar topiaries in new locations!

We also took a moment to admire this colorful garden, which was installed since we were here last. The last time we saw this spot it was just dirt, chalk marks, and string guide lines!

We found two new register locations had recently gotten new double plexiglass, allowing for both registers to be used simultaneously while protecting both Cast Members and guests. The first location to be upgraded was Pin Traders underneath Spaceship Earth, and the second location was Les Vins de France in the France Pavilion.

We found two locations unexpectedly open today. The first was Garden House in the Japan Pavilion, and the second was Lotus Blossom Cafe in the China Pavilion. We’re unsure why these locations broke with the usual schedule and were open, but we will keep an eye on them.

We noticed that the Arendelle Aqua Lemonade, which returned to Block & Hans for the International Festival of the Arts, was still available when we went through the American Adventure today. We’ll keep an eye on this beverage and let you know if it sticks around.

In merchandise news, we found a good portion of the new Germany Pavilion merchandise line which had previously been released exclusively to Annual Passholders in the Pop-Up Shop in the Fall, has finally made it’s way to Stein Haus.

We also found two new pieces, including this adorable women’s shirt featuring Minnie Mouse. For more pictures and information on both new pieces and the other merchandise now available, check out our article here.

We found a latecomer to the floral hidden Mickey merchandise line in the Mexico Pavilion. This hat features an embroidered cap and side, and retails for $27.99.

It seemed to be the day for hats, and we found this hat featuring Donald Duck “The One and Only” at Mouse Gear today for $27.99.

We had a great day at EPCOT today, and we hope you enjoyed coming along with us. Have a magical day!