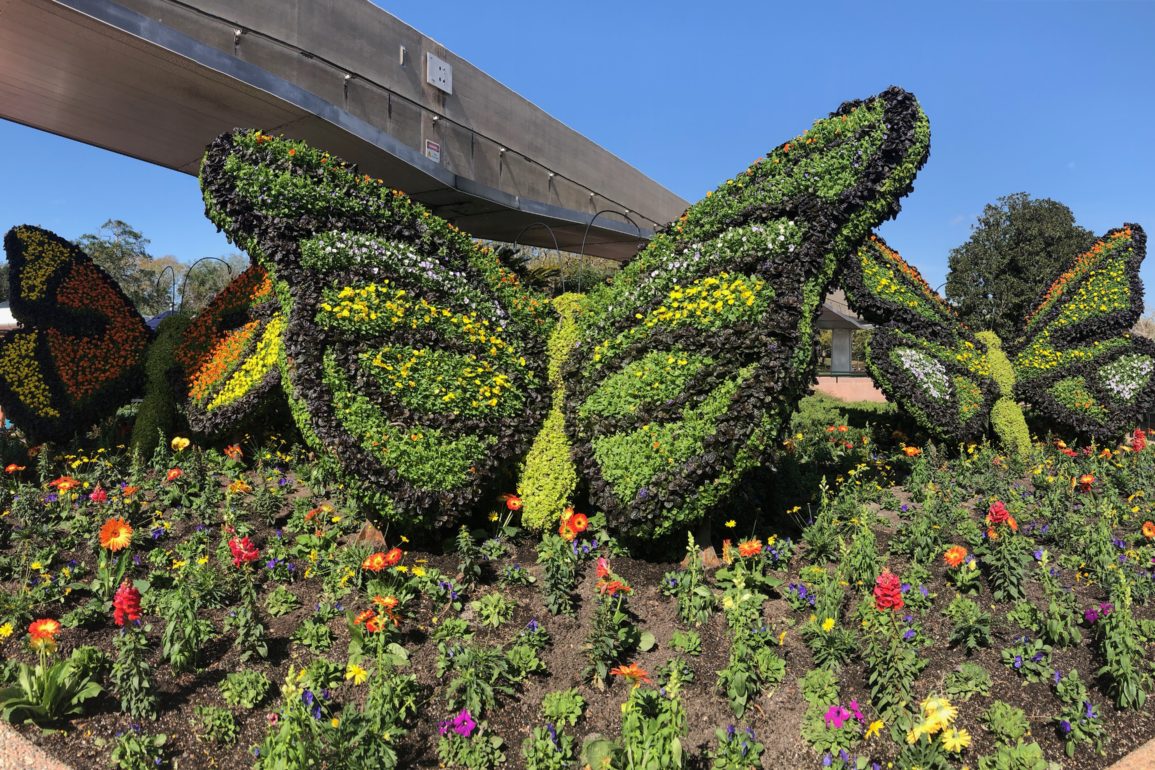 Hey everyone! I have to say we hit the ground running with our favorite bear from Hundred Acre Woods that was just as excited as us to, well see some butterflies. Will someone please tell this lovable bear, no nets allowed in the butterfly enclosure!

Wait, you guys will have security making sure no butterflies are harmed in the next upcoming Flower and Garden Festival? Did you hear that Pooh?

Ok good… now that we are all on the same page, we are indeed, really excited to see the return of the festival since its untimely cancellation last year because of the pandemic and topiaries are already sprouting up around Epcot, ironically, also butterflies.

On top of the beautiful butterflies, which you can find between Journey to Imagination and the land, we saw the preparation for the staples flower mural shown by the path to World Showcase, can’t say we can imagine how it will look exactly but that’s all apart of the fun, isn’t it?

Ok, enough about Flower and Garden, it’s a month away and there are still wonderful, amazing, artsy things going on right now and one of them is a brand new 3D chalk drawing made by none other than Nate Baranowski, a tribute to the recent movie soul, that surely touched ours when we saw it.

Now the movie has taken root in Epcot among other places around the Walt Disney World and if like some people you fancy a day solo at the park and don’t have someone kind of enough to take your picture at this spot, don’t worry, PhotoPass seems to have a new experience over at the American Adventure where you can take some Soul themed pictures.

And while you are in the area and have a love of Jazz like we do, go in to the American Adventure, turn left and be amazed to not only see the great Louis Armstrong’s trumpet, but now the rare, plastic sax, of Charlie “Bird” Parker, all we can say is, that’s J

In which we made our next stop at Spice Road Table and the front display definitely gives justice to the name as there were more spices there than we could count and a few we didn’t recognize, Nila Blue anyone?

On this shockingly sweltering day, of all people to run into Elsa who was apologizing to a young princess about her sister Anna’s rude behavior of eating all the chocolates and saving none for the guests.

From there we saw the Harmonious barges being tested, arms raised and lowered while cast members watched the giant mechanical limbs sprout from their secret confines and then slowly retreat back.

A saddening, yet encouraging view of the once glorious Innoventions West, shows that demolition is in super speed that now the building is mostly down to its bare bones.

And with that, back to the front and another end to a brilliant day spent at the park, what more could you ask for.

Well one more surprise, duh, and with that, walking out of the park, one piece of the Leave a Legacy wall has been revealed and our surprise was just as colorful as the wall itself.

And now, as this day comes to an end, we aren’t saddened as we leave, but looking forward to new beginnings and new surprises in the next day, until then, have a magical day!