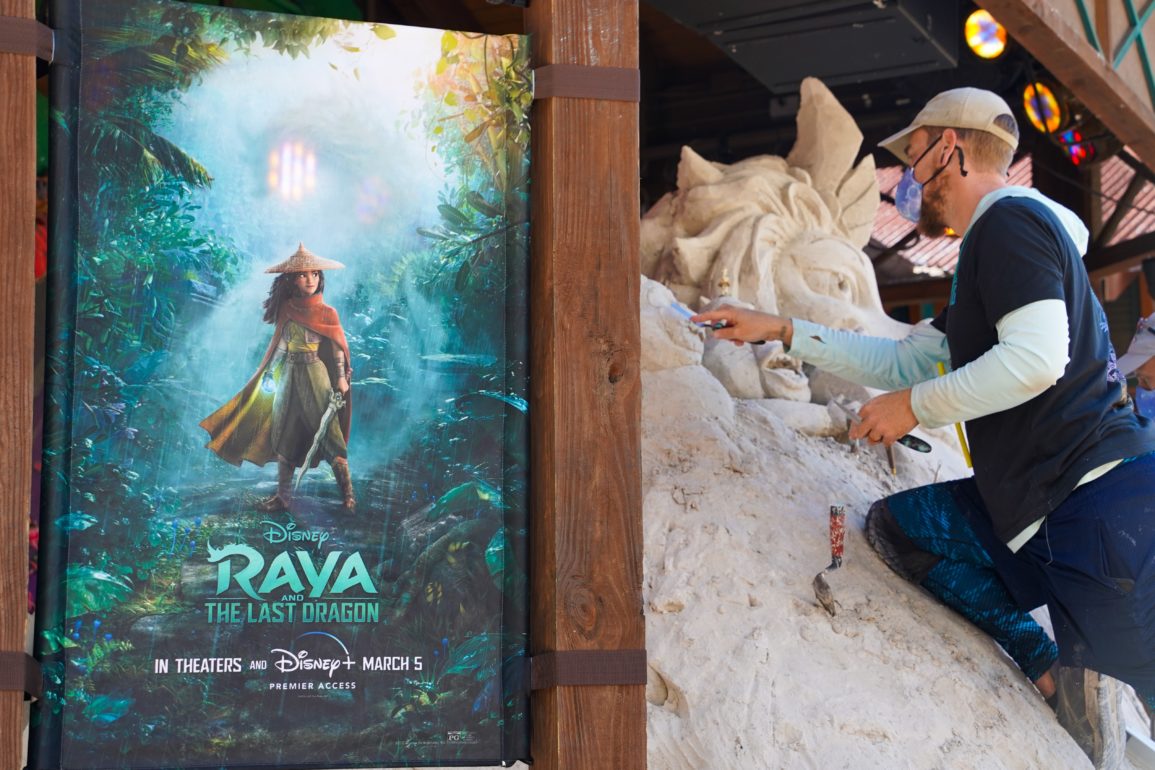 Greetings from the Magic Kingdom! We’re back for another weekend at Walt Disney World, after having experienced a busy Presidents’ Day weekend only a several days ago. We also had some unseasonably poor weather to deal with last Saturday, and today couldn’t be more different from the rainy experience of a week ago.

Starting out the morning, Cinderella Castle is presented with her stage mostly blocked by rolling planters and scrim, as both the castle and stage are expected to undergo some enhancements as part of their transformations for the 50th anniversary festivities.

The castle moat is being drained, with the expectation of equipment being moved in shortly for work on the castle.

Over in Tomorrowland, TRON Lightcycle / Run has seen some additional supports erected as we await the final, and highest, sections of the illuminated canopy.

Bonjour! Village Gifts in Fantasyland had its florist mural restored after being painted over during the shop’s refurbishment.

The western section of Peter Pan’s Flight has been covered in walls, scaffolding, and scrim, though no additional sections were added overnight for the refurbishment project.

In Frontierland, the reliable Country Bears were on the balcony of the Country Bear Jamboree to greet guests as they made their way through the land.

Mickey and Friends also made their way through the land as part of a regularly occurring cavalcade.

The same is true for Goofy and his pals, shown here as they circled the Hub just in front of Cinderella Castle.

As we prepared to head out of the park, the Dapper Dans, who occasionally hop aboard a Main Street Transportation trolley to perform, sung us out of the Magic Kingdom.

We decided to head to Disney’s Animal Kingdom today.

Our main reason for visiting — checking out this intricate sand sculpture which is being created for “Raya and The Last Dragon”. The work is expected to take the artists three full days to complete, which is quite impressive given the level of detail.

Outside of the Raya sculpture, the story of Disney’s Animal Kingdom was long lines.

Avatar Flight of Passage, a perennial favorite for guests, stretched to Harambe House and circled back towards Pandora.

However, guests could get a fairly up-close encounter with Pocahontas and Meeko as they floated by as part of a flotilla.

The line for Kilimanjaro Safaris stretched into the queue for Festival of the Lion King. While this happened occasionally during the holiday season, we wonder how this will be handled when the modified show starts performing again over the summer.

Kali River Rapids, which is currently under refurbishment, still has a ways to go before its anticipated April return.

The line for Expedition Everest, much like Kilimanjaro Safaris, also stretched to a shuttered theater — in this case Theater in the Wild, home of Finding Nemo The Musical.

Finally, we wrap up our day with a long line for DINOSAUR which stretched unusually far into DinoLand U.S.A.

Thanks for joining us at the Magic Kingdom and Disney’s Animal Kingdom today. For all of the latest news from the Disney parks around the world, be sure to download the latest version of WDWNT: The App, and customize the notifications for the parks YOU want to hear about.