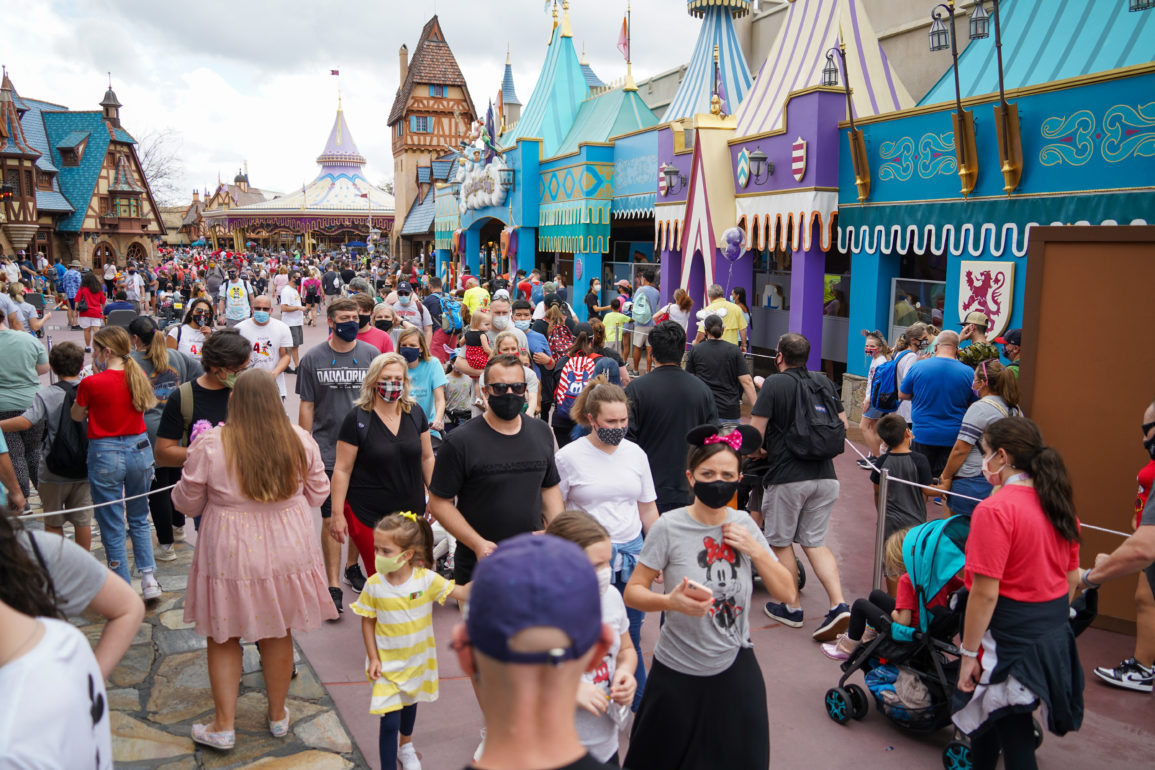 Welcome to the Magic Kingdom! We’re in for an extremely busy day at the flagship Walt Disney World park — mostly due to the influx of guests as part of Presidents Day weekend, but also in part because of a few attractions experiencing some very unfortunate downtime given the crowd levels.

Out front, there’s little to report with Main Street Station since themed scrim engulfed the building. As we’re now approaching two months since the station was completely hidden, we’re hopeful that the refurbishment project will wrap up soon.

At The Emporium, a small inventory of Cinderella Castle cookie jars were available. While these are a really cool souvenir item, it’s a tough sell for many guests with package pickup not being an option.

In Tomorrowland, we are sad to report that the PeopleMover remains closed. Currently the refurbishment is scheduled through February 28th, though reopening could happen a bit sooner — or far, far later — than that date.

TRON Lightcycle / Run is also part of the Tomorrowland delay assortment, with the Shanghai Disneyland clone not expected to reopen for Walt Disney World’s 50th anniversary as it once was.

Cinderella’s carriage, stationed in Fantasyland, was a popular spot today for couples to take photos. It turns out February 14th is Valentine’s Day, so this particular photo op received extra attention from guests.

As we navigated through Fantasyland, we hit a narrow spot in the pathway which could possibly cause guest flow and physical distancing issues later on. Spoiler alert — it caused issues much like what we saw back in January during another holiday weekend.

Nothing has changed on the preparations for the exterior refurbishment of Peter Pan’s Flight this weekend. The limited portion of scaffolding and scrim that was in place on Friday would be the extent of the structure today.

Moving on to Liberty Square, Haunted Mansion did not open alongside the rest of the attractions in the park this morning.

Rounding out the trifecta, Splash Mountain also experienced a very delayed opening — granted it would be the shortest of the three tardy attractions.

Attractions such as Big Thunder Mountain Railroad would carry extra weight for those that were closed, resulting in lengthy waits even early in the day.

Tinkerbell attempted to use her pixie dust to get the attractions up and running, but alas, it didn’t make much of a difference.

The Dapper Dans — all three of them — wore red for Valentine’s Day.

Making our second stop into Tomorrowland, the line for Astro Orbiter maxed out the placement of physical distancing markers for the queue. This would be one of many attractions that exceeded the level of planning today.

It wasn’t all bad, though, as this redesigned Mickey ear balloon hat showed up in the land.

At one point in the late morning, the line for Space Mountain stretched nearly to the exit of Tomorrowland Speedway.

The line for Mad Tea Party wrapped around the island where the attraction sits, and then extended out into walkways where there were no spacing markers nor cast member guidance.

Never fear, though, as Disney was offering sundaes inside of year-old souvenir hats.

Demand for ice cream inside of plastic hats — or maybe Peter Pan Floats — was strong.

Demand for Peter Pan’s Flight was also strong, so much so that the line was cut off during the day for physical distancing and guests were told to try back in 20-30 minutes.

In the early afternoon, physical distancing was apparently no longer a concern and the line was allowed to stretch further into Fantasyland, approaching the narrow walkway that we mentioned earlier.

As one might expect, a roughly nine-foot wide opening in one of the most heavily traveled corridors of the most-visited theme park in the world presented a bit of a congestion issue.

Due to the dire lack of space for lines, “it’s a small world” is again utilizing backstage areas for a portion of its queue.

Attempting to escape the crowds, we escaped to the less-packed Hub and caught the Royal Princess Processional as it passed in front of Cinderella Castle.

Winnie the Pooh, Piglet, and Eeyore appeared on a trolley which did a short loop up and down Main Street in the Fantasyland Friends Cavalcade.

Finally, we wrapped up our day with some newer balloons on Main Street, as the lilac and purple options are more recent additions to the floating bunch. Sadly, the Valentine’s balloons were not available at this point in the afternoon.

Thanks for joining us during this hectic and crowded visit to the Magic Kingdom. How do you feel about these busy days at the parks during holiday weekends? Do you think it’s too soon for the parks to be allowed to reach these levels of attendance? Let us know your thoughts in the comments.