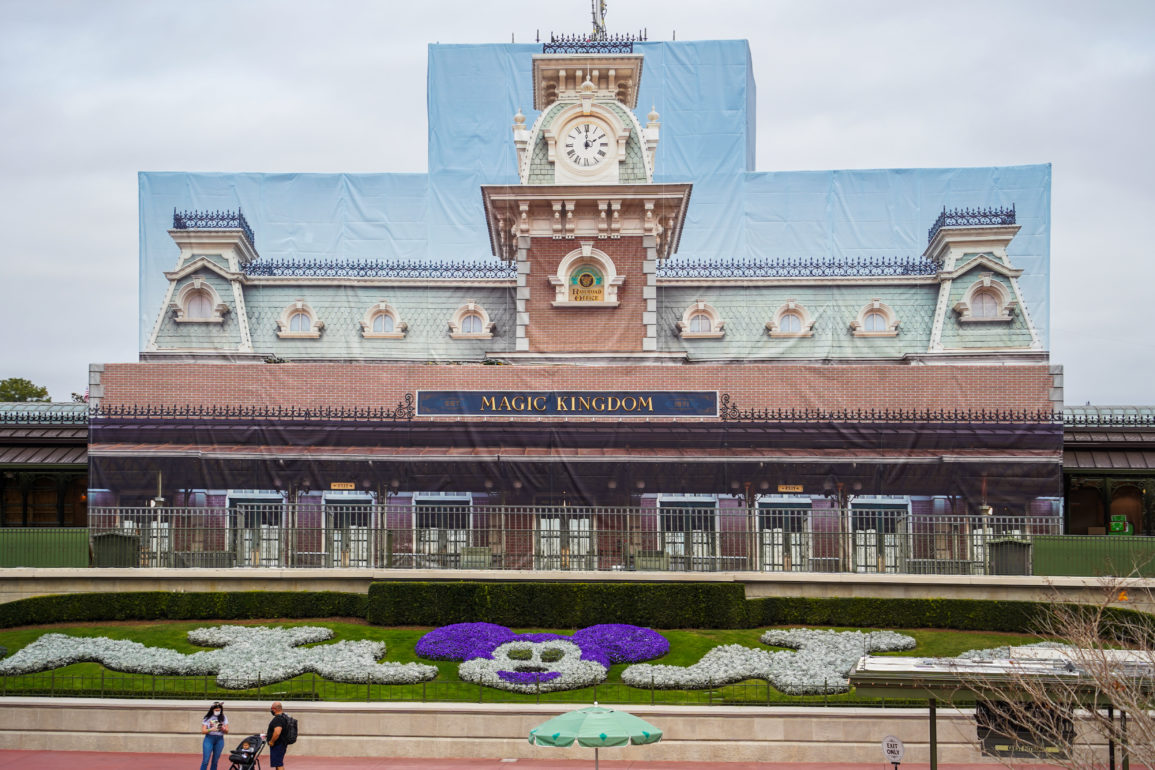 It’s the weekend again, and we’re back at Magic Kingdom! Unlike some recent weekends, though, the weather isn’t cooperating quite as much as we’d hope for here at Walt Disney World. Regardless, there’s a lot going on within the park, and as usual we’ll be doing a bit of park hopping in the afternoon. Let’s get the day going and head on in.

Early on, the weather wasn’t all that bad. Slightly overcast, but mostly dry as guests streamed into the park and down Main Street.

Our first stop within Magic Kingdom yielded an exciting find — two new pairs of ear headbands. These new pieces of headwear come in a tweed-laden version with pearls and a yellow poppy style, both making very different statements and suiting different personalities.

A statement of a different sort is this The Child streetwear beanie, which is part of a larger collection of casual apparel themed to The Mandalorian. This particular piece runs $19.99 and was found at the Emporium.

Moving into Tomorrowland, nothing seems to have changed with what remains of the supports which previously held thematic towers from the 1994 revision of the land.

Buzz Lightyear hasn’t changed much either over the last several days, either.

One of the most popular attractions in Tomorrowland today — Joffrey’s. The line was about a dozen parties long, which was a bit surprising on a day which wasn’t particularly cool.

Checking up on TRON Lightcycle / Run, there have been less visible changes as of late while crews weld and grind attachment points on the canopy structure, as opposed to the much sexier additions of canopy pieces which have regularly occurred in past weeks. We’re hopeful, though, that the coming week sees the placement of the upper-most portions of the canopy frame.

In Fantasyland, the ongoing refurbishment of Bonjour! Village Gifts continues at a good pace, though with more and more interesting color changes taking place as the project progresses.

Heading to Frontierland, the sign for Big Al’s is still missing as we cross our fingers that the removal of the sign is merely a refurbishment and not anything more substantial.

In Adventureland, Swiss Family Treehouse will be closing in a little over a month for a relatively short refurbishment.

Back on Main Street, Tinkerbell was spreading her pixie dust all along the way.

At Main Street Station, we had a bit of a “British invasion” with Winnie the Pooh, Peter Pan, Mary Poppins, and Alice all taking over the train station which is still undergoing its refurbishment.

From the monorail as we head towards our next destination, we get a better view of the detailed scrim which now hides the station underneath.

Upon reaching EPCOT, we headed to Future World East — well, what remains of it — and took a look at the latest condition of Guardians of the Galaxy: Cosmic Rewind. The structure has recently had its façade enclosed as it inches closer to completion in 2022.

On a less delayed note, Cool Wash has reopened after being dormant for a couple months.

Inside Mouse Gear, this $3.49 image-shifting 2021 postcard is now available, making for a dynamic — if excessive — souvenir you can mail to friends or family.

That Mouse Gear is, of course, the temporary location which guests can currently visit. The true home of Mouse Gear continues to be constructed on a daily basis, with windows and entrances taking shape more and more by the day.

On the other hand, Innoventions West has finally reached the point of having more of its structure torn down, after that process being paused for nearly a year due to COVID-19 delays.

Near the Imagination Pavilion, the former playground which had its play equipment removed recently is now hidden behind scrims. What the space is to be used for remains a mystery.

On World Showcase Lagoon, fireworks barges which recently appeared on the water seem to have been removed, as the floating shell stations are now notably absent.

In the Germany Pavilion, Mezzo Mix continues to be missing, which we first noticed nearly a week ago. When the frozen drink option will return remains a mystery.

Another Germany Pavilion staple to go missing are the trains. None of the miniature trains were present on their tracks today, though possibly as a result of the inclement weather.

More and more detail work has been completed on the future home of La Gelateria, with this faux stone work looking to be in its final form.

Finally, we round out our day outside of the France Pavilion expansion — on the Skyliner leaving the park, to be precise. Little has changed since the first section of the expansion was made available to guests last month, but any day could be the day that the remainder of the land is revealed.

We appreciate you joining us on our adventures through Walt Disney World today. Be sure to stay tuned to WDWNT.com for the latest news from the Disney parks around the world!