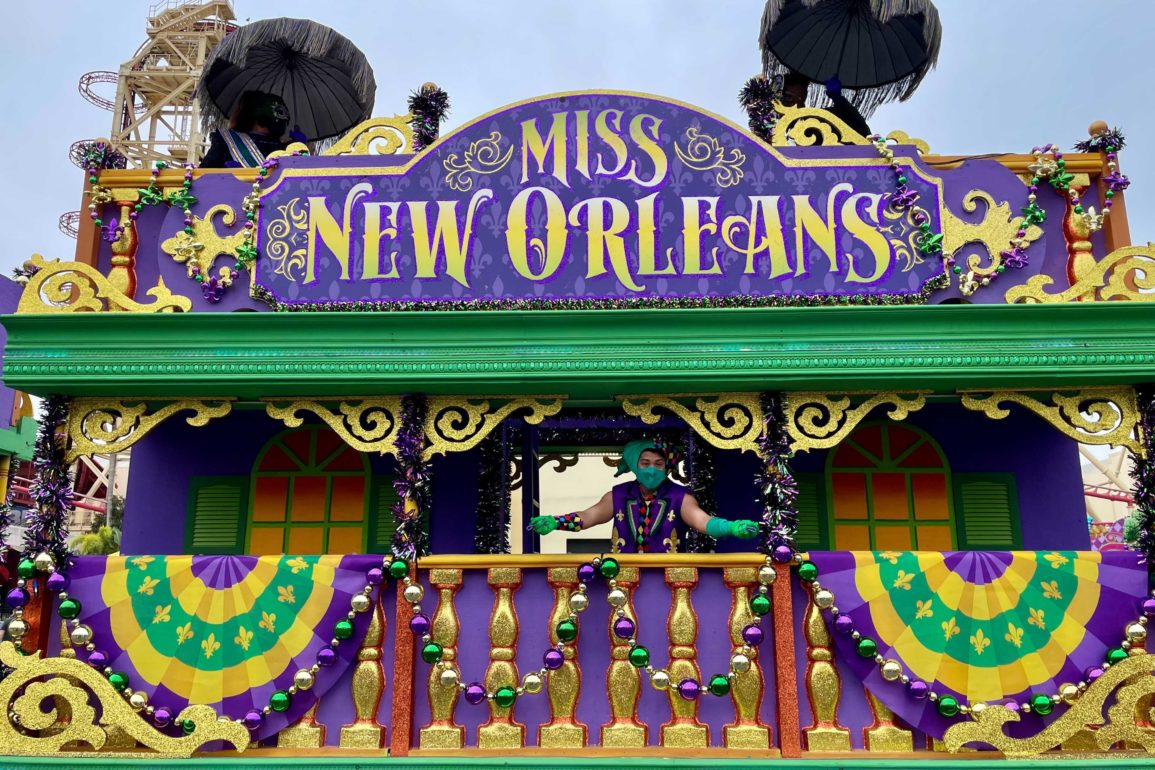 Let the good times roll! Mardi Gras has officially started at the Universal Orlando Resort and we have big plans to eat and drink our way around the park. As we arrived, we were excited to see the giant, glittering parade floats placed all throughout the park.

The music around the park has gotten us in the mood to celebrate and we’re ready to “party like a pirate” thanks to all the floats around the park. The trucks parked in front of the floats were a little awkward, though.

There is so much entertainment around the park. From stilt walkers to musicians, Universal Orlando has done a great job with this modified Mardi Gras celebration.

The highlight of our day is when costumed Team Members began throwing beads from the floats around the park. Everyone was having a great time catching beads! We love watching everyone, young and old, reaching out to catch the beads as they fly through the air.

Once the food booths opened for the day, the lines got long around the park. We picked up our Mardi Gras Tasting Lanyard and decided to start eating our way through the park. The Tasting Lanyard is the best deal if you plan to enjoy all the festival food in the park.

Many of the booths had long lines, so we stopped in to try a few of the locations with short lines. First stop of the day is the Bahamas booth, which set the bar high for every booth to follow. Read our full review of the menu here.

Puerto Rico appeared to be one of the most popular booths of the day, with a line that stretched on and on. We came back during the week to try it!

Fans of scavenger hunts in the park will enjoy the new Krewe Crawl. Travel around the park and find different skeleton pirate displays and redeem your map for a prize.

It’s been a busy day and we’ve got a lot of food to eat, so that’s all for this visit to the Universal Orlando Resort. Keep following WDWNT and Universal Parks News Today for more coverage from Mardi Gras 2021: International Flavors of Carnaval.