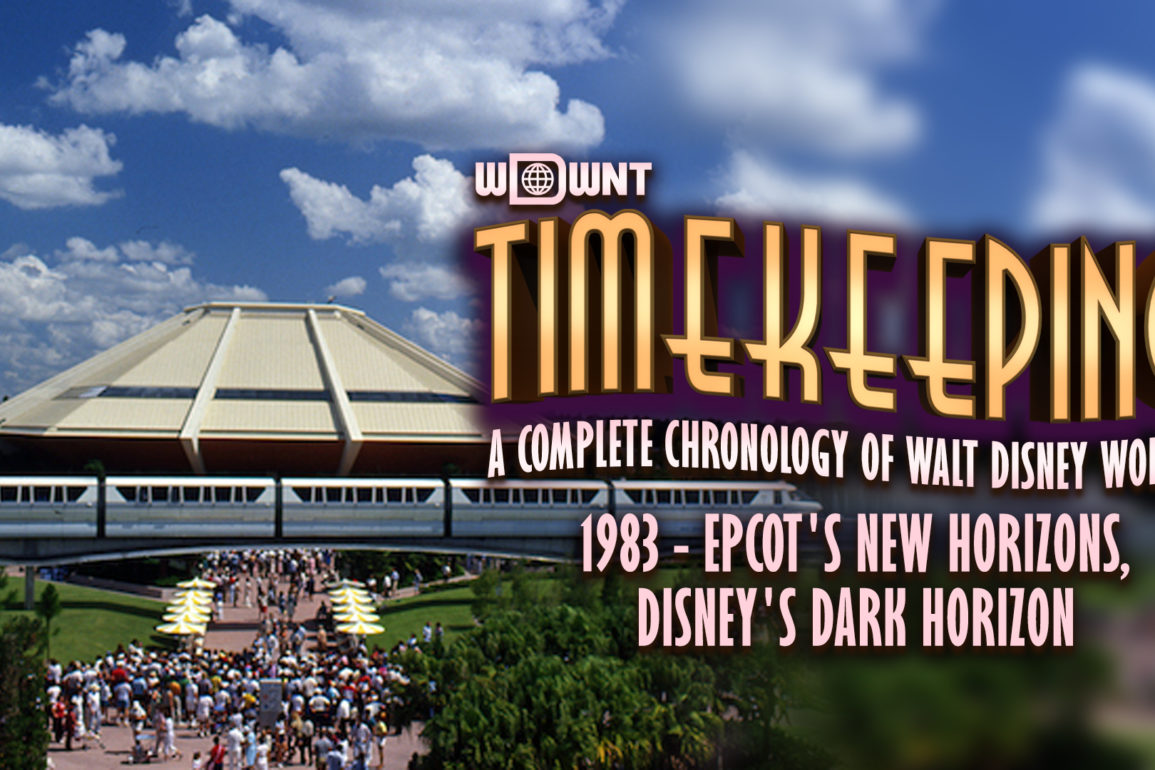 1982 was a big year for Walt Disney World, but Disney was far from done. EPCOT Center ‘s debut changed the landscape, but the park was not completed with its first phase. Several key elements were put on the back burner in order to get the park open by October 1, and it would take a full year for that initial phase to wrap up, but of course as always, it wasn’t just one park that saw changes in 1983.

The Magic Kingdom and Resorts

In Fantasyland, The Castle Camera Shop located next to Peter Pan’s Flight became Disneyana. The Enchanted Grove across from the Mad Tea Party opened to cell citrus drinks and was presented by the Florida Citrus Growers. In Tomorrowland, the stage, which had previously been showing the old castle Tencennial show, began to show “Show Biz Is” on July 12.

The SpacePort was now listed “electronic games” in addition to the regular gifts. I’m unsure if this meant they now carried the games for sale or had a small arcade inside.

Speaking of arcades, the Frontierland Shootin’ Gallery Arcade switched from pellets to the infrared sensors some time in 1982-83. The afternoon parade was the Mickey Mouse Character Parade, similar to the previous cavalcades.

Nearby, the Contemporary would see a new paint job in the interior with each level receiving a specific shade to imitate the strata of rock. The Polynesian saw a quiet year as it would begin significant changes in 1984.

Two third party hotels opened in the Walt Disney World Village Hotel Plaza. The 880 room Buena Vista Palace and the 800+ room Hilton opened in May and November respectively. Disney was planning expansion of all it’s existing resorts, except the Contemporary and adding more third party locations on property.

While the imageworks and the Magic Eye Theater had been open, the dark ride Journey into Imagination had been delayed until March 5, 1983 because of issues caused by the complexity of the ride system. Getting the trains to move in time with the circular opening scene proved difficult, and the ride couldn’t handle the intended roller-coaster-like short drops originally intended for the sections where guests descended to a lower level.

Also delayed was Horizons. This look into the future was seen as tying all the aspects of Future World together and opened on October 1. It was proposed that Horizons would be the sequel to the Carousel of Progress, Disney’s attraction from the General Electric Pavilion at the 1964 New York World’s Fair. As the Carousel of Progress followed the changes in lifestyle that faced a family as they lived through the 20th century, Horizons continued their story, showing how they might live in the 21st century. The Carousel’s theme song “There’s a Great Big Beautiful Tomorrow” was part of the Looking Back at Tomorrow portion of Horizons.

Horizons is mostly remembered for allowing guests to choose their own ending from three choices.

In World Showcase, China received a shop, Yong Feng Shandian (Bountiful Harvest). Either a second or sectioned off porcelain shop, Porzellanhaus, opened in Germany. Japan and Mexico both either received exhibits in 1983, or they were more likely added to the expanded guide map. Japan had the “Living Gifts of Japan” featuring arts crafts and historical pieces, while the Mexican pyramid housed 130 pre-Columbian artifacts. Likewise, there were some changes to the shops in France that might also be attributed to the map. First the wine shop was now listed as  La Maison du Vin and simply sponsored by Barton & Gustier. Les Halls was now called Galerie des Halles, and Plume et Pallete was now listed as a book shop. The United Kingdom featured a season eatery, the Renaissance Food Festival.

June saw a new nighttime show, A New World Fantasy over the World Showcase lagoon.THe show featured projections, fireworks and moving lights. The music was arranged by Don Dorsey, as synthesizer versions of classical pieces by numerous composers including Beethoven, Bach, Offenbach, Handel and Souza among many others.There were a total of 35 pieces of music.

1983 was a year of expansion at EPCOT. We received what are arguably the two best attractions of the initial phase. However, now that these are lost to time and replacements their impact might be minimized. Maybe more impactful was EPCOT’s poor performance. The park had gone over budget and combined with a series of costly failures at the box office, the company as a whole was beginning to seem like a target for corporate raiders, and in 1984 a power struggle would erupt that would change the fortunes of the company, and particularly the parks forever.

Next
UPDATE: Disney Will Release Raya and the Last Dragon at No Extra Charge to All Disney+ Subscribers on June 4th