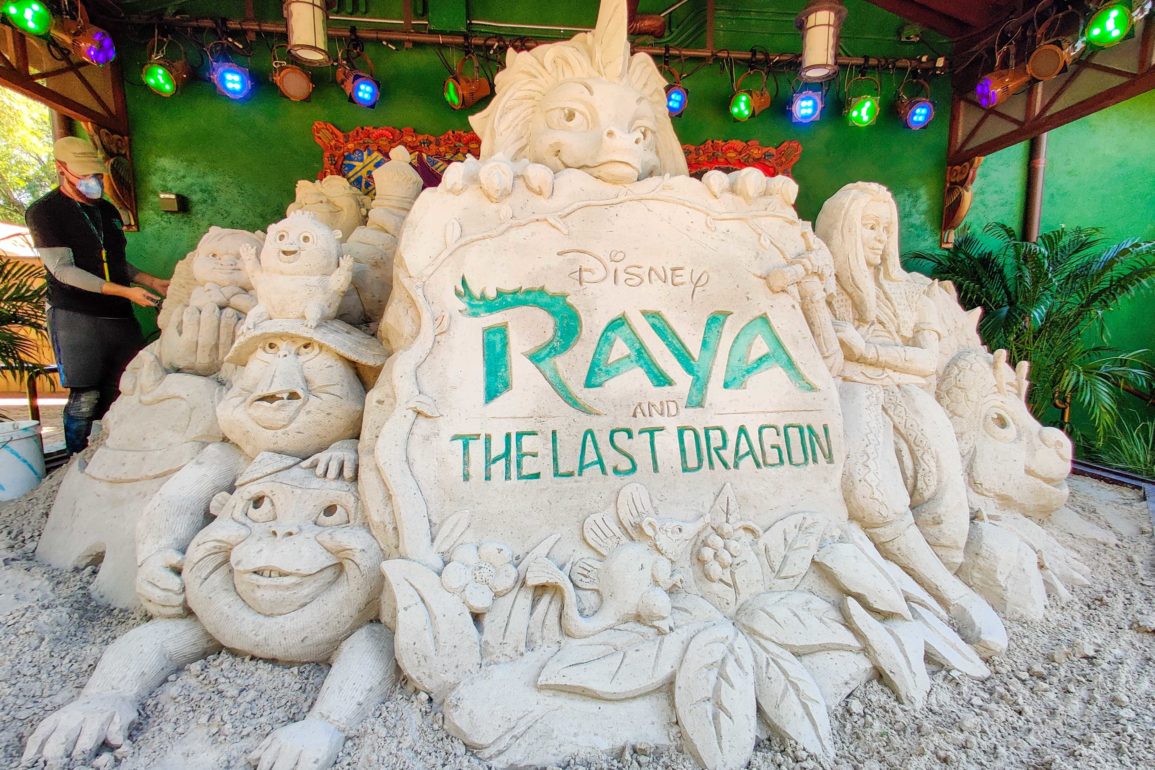 A few weeks ago, a sand sculpture inspired by Raya and the Last Dragon debuted at Disney’s Animal Kingdom. Since then, the film has been released in theaters and on Disney+ and everyone has gotten to know the film’s characters. Today, we saw the artists completing a new sculpture out of the previous sculpture’s base to showcase more characters from the film.

The sculpture still has the film’s title in the center, with Sisu the dragon peeking over it. The border around the title has changed to have plants and vines. Raya stands to the right in a different pose.

Tuk Tuk, Raya’s loyal sidekick, is now next to her instead of on the other side of the sculpture.

One of the artists was working on Tuk Tuk’s eye.

The other artist was working on a new version of the Ongis, who are stacked on top of each other next to the title. You may notice the artists were also wearing shirts with the Ongis on the back.

Above the Ongis, Tong holds baby Noi in his hand. Tong and Noi were not featured in the original sculpture.

Boun has also been added to the sculpture, next to Tuk Tuk.

Within a few hours, the new version of the sculpture was complete

Guests can view the sculpture at Discovery Island Stage.

Raya and the Last Dragon merchandise is available throughout Walt Disney World, and guests can learn to draw characters from the film at the Animation Experience in Disney’s Animal Kingdom.

Have you seen Raya and the Last Dragon? Let us know what you thought in the comments!

Previous
VIDEO: Marvel Studios’ “Assembled” Takes You Behind The Scenes Of “WandaVision”; Now Streaming On Disney+