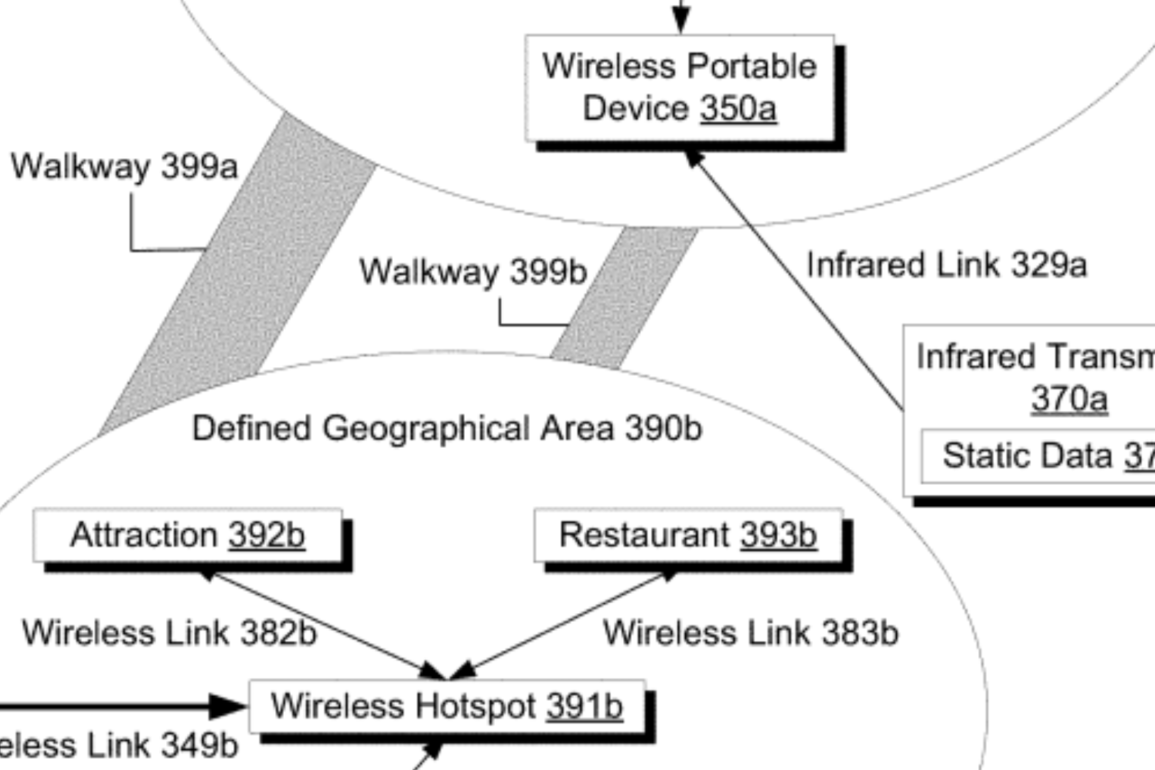 Visitors to Disney Parks have been using smartphones to manage their visits for years. The My Disney Experience app is an essential planning tool. Recently, Walt Disney World added Disney MagicMobile, which allows guests to use their smartphones and watches in place of MagicBands or ticket media. Now, a recent Disney patent application hints that portable video game consoles — like the Nintendo Switch — could soon join the mix.

Published March 11, 2021, “System and Method for Providing Location-Based Data on a Wireless Portable Device” details how portable devices could use location services to help get the most out of a Disney Park visit. In addition to portable gaming consoles, the system would also work with smartphones.

By optimizing map routes and schedules using the location-based data and user preferences including wish lists, the wireless portable device can provide helpful recommendations via the display, enabling the user to plan an efficient schedule of activities in the defined geographical area optimized by walking distance, queue wait times, booking and arriving at reserved events, and/or by other user preferences.

The patent mentions “expansion cartridges” that are inserted into the device. The cartridges (110) run the code that is needed to communicate with various waypoints, including wireless networks and infrared transmitters. While the Nintendo Switch has an infrared (IR) sensor on the right JoyCon, the Switch Lite lacks such a sensor. In the absence of an IR receiver, the portable console would use the wireless network to obtain a position. In the case of smartphones, which also normally lack an IR receiver, location services would do the heavy lifting.

Although the patent application mentions that a system like this would work well at a conference or trade show, the application examples are based in a theme park. The patent describes two friends — Amy and Ben — who are visiting a theme park.

Amy’s device can both request information and receive information via push notifications. What kind of information will Amy receive?

Many different types of location-based data might be provided to Amy. “Location-based” is used here in the sense that the data could depend on the location of the associated wireless portable device. However, the data could also be time sensitive, or it could depend on some other variable, external to the wireless portable device and retrieved from the wireless network. Location specific data such as positioning and maps will be discussed in greater detail in conjunction with FIG. 4. Time sensitive data could include schedules or time limited promotions. External variables could cover details relating to points of interest within a defined geographic area such as wait and queue times, map traffic, restaurant reservation status, or any other item that might be accessible from network 360. For example, attraction 392a, the pirate ship stage show, might automatically calculate the estimated queue wait time based on sensors placed along the queue and transmit that wait time over wireless link 382a to be stored in dynamic data 341 on server 340. When an automatic update occurs, Amy will be able to check how long the estimated wait time at attraction 392a will be, and she can decide whether it is worth spending 30 minutes in line to see the pirate ship attraction. Similarly, restaurant 393a, the pirate themed seafood restaurant, might send an estimated wait time to server 340 based on guest seating turnover times and customer queue length. Using this dynamically updated data, Amy can make informed decisions on how to spend her time, helping her feel in control and making the most of her limited available time.

The lengthy chunk of text above explains how this system differs from My Disney Experience. While My Disney Experience is capable of receiving push notifications, those notifications consist only of information regarding experiences the guest has already planned. This system would factor in existing plans and offer suggestions for new plans based on the data it is receiving.

The patent goes on the state that theme park operations staff can also manually send messages. If the aforementioned pirate themed seafood restaurant is nearly empty, Cast Members could push out a timely message, including discount codes.

As shown in the Fig. 3, Ben’s device (350b) does not currently have a network connection. His device will still work, but it will show outdated information. It is also unable to receive notifications.

Once Ben is reconnected, his device will update. Interestingly, the patent mentions that games related to attractions could be automatically downloaded to the mobile device.

Once Ben reenters an area with wireless reception such as defined geographical areas 390b and 390a, wireless portable device 350b might request an update from server 340, filling in the data gaps due to being disconnected from network 360. Thus, wait times for attraction 392b and restaurant 393b might be updated to reflect current conditions, and location-based data associated with defined geographical area 390b might be downloaded. For example, an outer space shooting game or an informational astronomy video might be downloaded to wireless portable device 350b. If the shooting game or astronomy video already exists on the device, the download step might be skipped to save network bandwidth.

One of the issues addressed in the patent is foot traffic inside the theme park. Note that Fig. 3 shows two walkways (399a, 399b). The system would be able to determine the best route for the guest. It also can recommend viewing spots for parades.

Additionally, configurable routing capabilities might be built into the map, allowing a user to plan the most optimal route based on some desired characteristics. For example, a user might be interested in the fastest way of traveling from defined geographical area 390a to defined geographical area 390b. Server 340 could query the traffic conditions of walkways 399a and 399b, providing an optimal path that is estimated to require the least amount of time. For example, if the traffic in walkway 399b is particularly crowded even if the path itself is shorter, the interactive map might recommend the user to use walkway 399a instead since it might result in a shorter estimated time. Alternatively, the user might be interested in seeing a parade on the way even though it might take longer. Server 340 might then query the theme park schedule, determining that a parade will start at 5:00 pm along walkway 399b only. Thus, the interactive map might inform the user that departing for walkway 399b at 4:30 pm would allow for optimal viewing of the parade. The implementation of such graph optimization algorithms is well known in the art and can be engineered to meet the needs of the particular event.

The patent also describes how a communication system could be implemented, allowing guests to use a friend list to chat, make plans, and map a path to meet.

Recall Amy and Ben, the two friends who are in different areas. They may wish to meet up somewhere for coffee and a chat. Amy and Ben might have registered user accounts on server 340, mutually adding each other to a “friends list.” The program code executing on wireless portable devices 350a and 350b might then read this friends list and allow designated “friends” to chat with each other, locate other friends on a map, and coordinate meetings by sending queries to server 340 or directly to each other over network 360. Thus, Amy and Ben could chat with each other, agree to meet at restaurant 393b, and then obtain a route to arrive there based on their current locations.

The expansion cartridge also makes it possible for portable gaming consoles to receive data while in sleep mode.

This patent application shows that Disney is looking at how to use all of its data points to help guests get the most from a visit. By adding portable game consoles to the mix, Disney has the ability to send guests games that are more interactive and powerful than those one smartphones.

In Fig. 5, we see how location information leads to interactive games being pushed to the wireless portable device.

At this time, it is too early to determine whether this system could become a new version of My Disney Experience. It could be an entirely new solution, one that integrates planning and gaming, perhaps blending My Disney Experience and Play Disney Parks.

If you are interested in other recent Disney patent applications, be sure to check out these posts:

What do you think Disney could do with this proposed system? Share you best guesses in the comments.