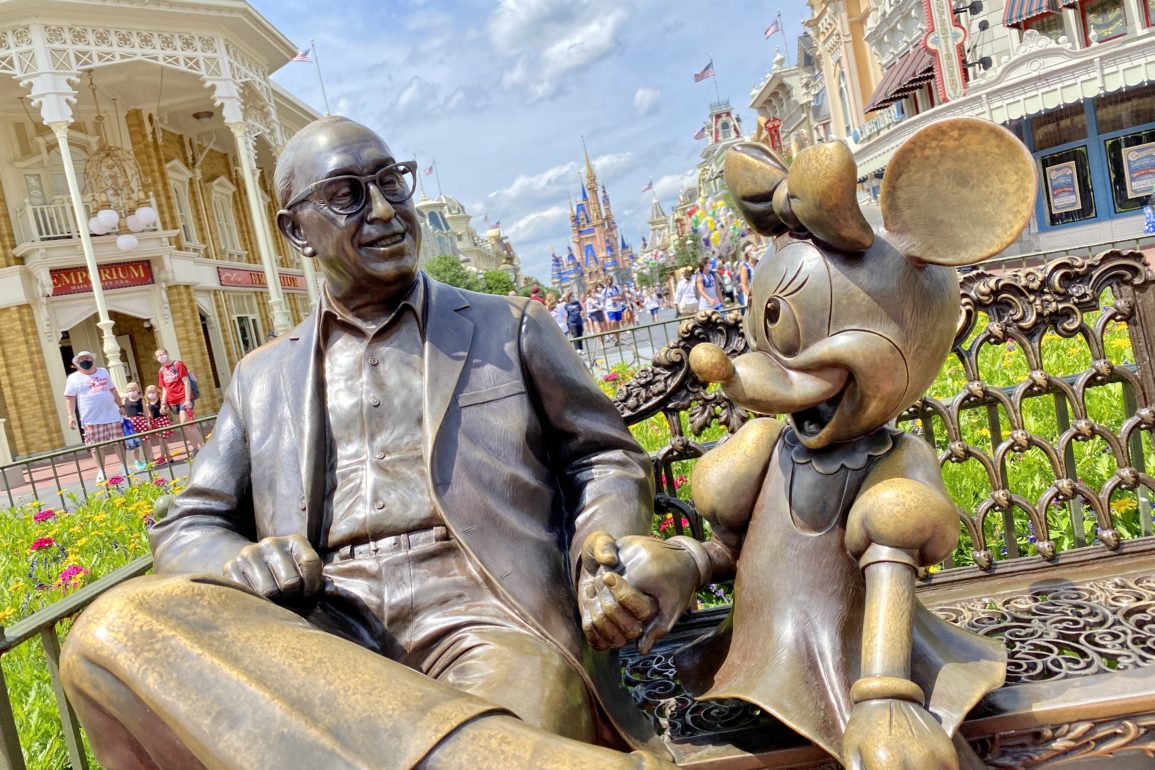 Hello from a beautiful day here at the Magic Kingdom! It was a quiet day here at the park for the most part, but we still found some exciting things to show you. Let’s get started!

When we entered the park, we noticed that the construction walls and accompanying temporary shrubs surrounding Cinderella Castle Stage had been removed. The stage is still surrounded in scrim fabric on the backside as you approach it from the Castle, and it hasn’t had any other progress to the footing than when we showed it to you last. The show structures have not been returned.

We also noticed that the railings on the East, or right side, of the Castle had been painted, as we had seen the left side railings were painted a few days ago. The railings on both sides look a bit darker than they did the other day, so we’re wondering if they repainted all of them in a darker shade of bronze, or if it dried much darker than it had been the other day.

We had some exciting updates on the Tomorrowland Transit Authority Peoplemover today.

In the morning, we saw Cast Members on the load platform cleaning and setting out cones.

A little later, we saw Cast Members riding the Peoplemover as it was being tested with attraction audio running. Shortly after we saw this, it was announced that the Peoplemover would finally be reopening this weekend, a week ahead of schedule. We can’t wait!

A large section of fresh concrete was blocked off in Tomorrowland, blocking one half of the walkway in between Cosmic Ray’s Starlight Cafe and the Tomorrowland Speedway.

Repainting has continued on Dumbo the Flying Elephant, with the center building’s striped wall being worked on recently. The front is done, but only the top half of the sides are done. The roof has not been repainted yet, nor has the sign.

Two more sides of this yellow roof on the left-wing have been painted, as well as more of the blue roof sections. The line where they stopped painting the blue section is visible from the outside of the attraction.

Nearby, the Casey Jr. Splash ‘N’ Soak Station engine has had its roof and smokestack painted, with the white detailing removed from the roof in the painting process.

The barrel bridge on Tom Sawyer Island reopened to guests today after a comprehensive refurbishment that continued after the rest of the Island opened.

We checked in on the Jungle Cruise today, but found that no progress had been made on the scenes awaiting changes on this iconic attraction.

We found some merchandise to show you today, starting with two tops or fidget spinner toys. The first toy was Mickey Mouse-themed.

The second was a Spinning Teacup toy. Both of these toys are sold at Star Traders for $12.99.

Next, we came across the Minnie Mouse Dots Kate Spade Collection at Uptown Jewelers, which has been out for some time but is new to the parks. Prices range from $128.00 to $328.00.

Our favorite find of the day was this new open edition Raspberry MagicBand. For more pictures and information, check out our article here.

After we had spent the day at the park, we headed out to a few of the resorts to see what was new there. On our way, we saw that this section of iconic colorful fence at the Transportation and Ticket Center had been removed and replaced with temporary crowd barriers.

We found a new Mickey water bottle at Bay View Gifts in the Disney’s Contemporary Resort which matches the pink Minnie water bottle we found at EPCOT yesterday. This water bottle retails for $14.99.