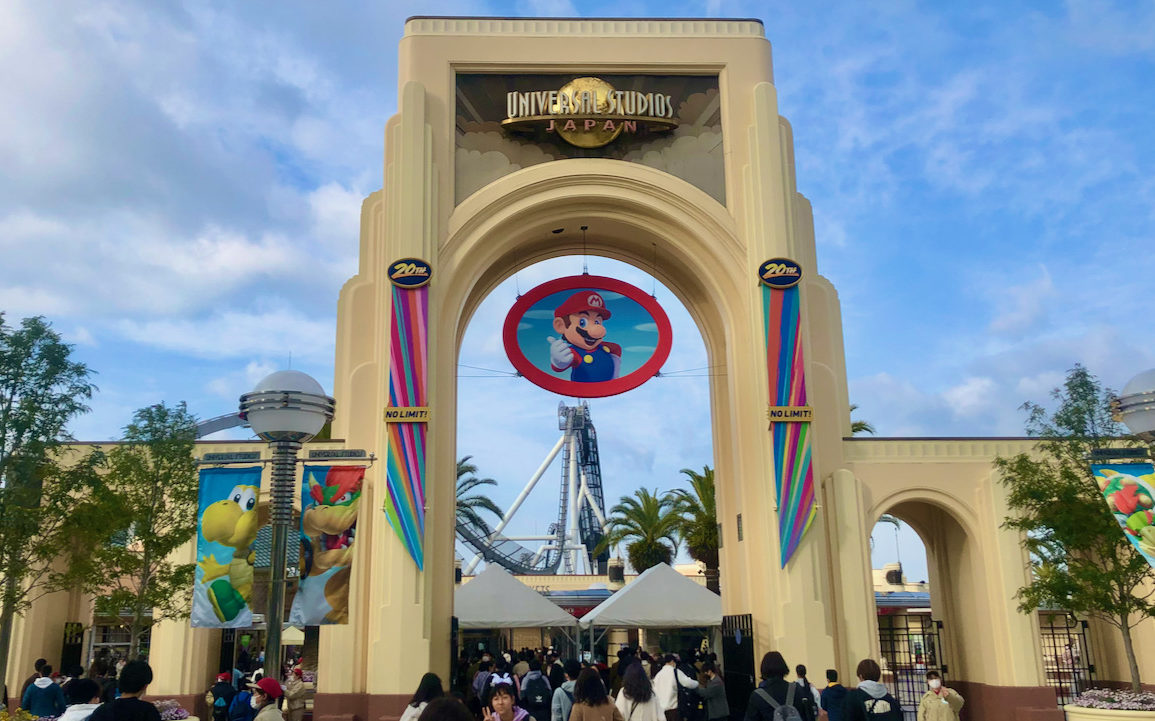 With Super Nintendo World’s grand opening and the start of the park’s 20th-anniversary celebration, there’s plenty of reasons to visit Universal Studios Japan in Osaka! So why not come join us on a journey around the world’s most visited Universal park? Let’s go!

The Mario medallion still graces the arch, along with Super Nintendo World flags and 20th Anniversary banners. It’s a nice way to get pumped up as you enter the park!

Inside the park, the Minions greeting has changed to the Minions NO LIMIT Greeting as part of the 20th-anniversary celebration, complete with new costumes for all four Minions!

Backlot Accessories just inside the park now features Mario decals and flags along the exterior, providing Mario accessories alongside those from other IPs at the park for Guests to sport during their visit.

Even the Studio Guides now have Mario on the front cover alongside other Universal Studios Japan characters like Woody Woodpecker, Elmo, Snoopy, and the Minions.

Because Power-Up Bands can break rather easily, Universal Studios Japan has set up an exchange area to transfer data between Power-Up Bands at Rodeo Drive Souvenirs in Hollywood, near the park entrance. This is a significant improvement from during the technical rehearsals, where Crew Members had to be called down to a Power-Up Band cart in Super Nintendo World to take our broken band away for replacement.

All guide poles now feature Super Nintendo World on the map to help Guests get around the park.

Although rather embarrassingly, all of the poles incorrectly printed the land’s title as “Super Nitendo World” instead of “Super Nintendo World”.

The adorable ? Block balloons featuring Super Mushrooms are available once more at the park! Crew Members all over the park were selling these to many a happy Guest when we passed by.

Previously only seen on the balcony above the path, Shrek and Fiona have finally moved to greet Guests from 6 feet away in front of the Cinema 4D. Shrek’s 4-D Adventure still has not returned to the park, however.

Also out in Hollywood were Woody and Winnie Woodpecker, sporting their very colorful 20th-anniversary outfits!

Down the road a bit, a quick pop into the Mario Store reveals that the store is still mainly focused on the “Whose Cap?” line introduced in October. Perhaps after more of this merchandise has moved, the store will transition into carrying the Super Nintendo World merchandise that is currently available at the Universal Studios Store.

Signs near the Central Park lottery area reveal the status of entry for Super Nintendo World. At this time, Timed Entry Tickets had been fully distributed and lottery tickets were being given to Guests.

Despite the newly opened land, wait times remained low for much of our visit. Plus, Mario Kart: Koopa’s Challenge and Yoshi’s Adventure finally made their way to the board. Their spots were formerly occupied by Playing with Curious George and Universal Monsters Live Rock & Roll Show.

Decorations are all over the park to celebrate the 20th Anniversary, including at the prize games across from Mel’s Drive-In.

Over at Space Fantasy: The Ride, the doors between the preshow area and hall are left open to allow for better ventilation amid the crowd increase. It’s spring break time in Japan, so students have flooded the park.

Over on Sesame Street in New York, the stage has been updated for the new Sesame Street NO LIMIT Energy show that takes place five times daily. You can check out a full video on our YouTube channel!

Over at Finnegan’s, it’s St. Patrick’s Day every day for the 20th Anniversary, with tons of green (or green-dyed) dishes for Guests to choose from!

Universal Market has been transformed into the NO LIMIT! Market for the anniversary, complete with new banners and a massive billboard.

There’s also a photo-op for Guests to take their pictures with a lookalike of the main entrance arch.

Over in Minion Park, the Minions are ready to celebrate Easter with tons of egg and bunny-themed decorations!

Meanwhile in San Francisco, Lombard’s Landing has been transformed from the indoor Mask Free Zone into the Detective Conan Mystery Restaurant, which sold out almost instantly after its announcement.

Several other restaurants around the park have reopened amid the heightened capacity, including the Lost World Restaurant, which had been closed since last year.

Down in Universal Wonderland, the pictures of Wonderland characters hanging from the side of the Pantages Theater facade have finally been replaced. They were incredibly faded last year, so it’s nice to see these refreshed.

Hello Kitty, Elmo, and Snoopy are back in their Easter garb once more!

Plus, all around Universal Wonderland, absolutely adorable Easter-themed décor matching its area adorn buildings and planters.

Of course, what everyone wants to see at Universal Studios Japan is Super Nintendo World! It used to be that we couldn’t take you any further than this sign, but of course, now you can experience all of Super Nintendo World here on Universal Parks News Today! Be sure you take a tour, just in case you’re not familiar with the exciting expansion yet.

One of the fun details as you walk up to Super Nintendo World’s entrance is that there are dates hidden as scores in the concrete, each representing a major Super Mario title’s release. And it culminates in the final “202103” representing the land itself. Previously this read “202006” and “202102” but was changed twice as the land’s grand opening date changed.

Aboard Mario Kart: Koopa’s Challenge, Guests are now handed cards showing how to drive their karts and play the game properly. This isn’t out of character for Universal Studios Japan, who also hand out cards on Hollywood Dream: The Ride, The Flying Dinosaur, and Harry Potter and the Forbidden Journey to explain rules to Guests before boarding.

A Crew Member was also kind enough to allow us a picture of this sign, which explains to Guests that they must touch their Power-Up Band to the steering wheel when they board.

Just like at Space Fantasy: The Ride, the doors between preshow rooms at Mario Kart: Koopa’s Challenge are left open while Guests are experiencing the preshow video in order to better ventilate the space.

Some of the steering wheels aboard Mario Kart appear to be a bit worse for wear already, with the red M symbols peeling on a couple of Karts. If you want to experience Mario Kart: Koopa’s Challenge including a full POV with the augmented reality and a queue tour, be sure you check out our video and photo tour!

With Super Nintendo World open at night too, it’s the perfect chance to score some empty photo opportunities like this in front of Peach’s Castle.