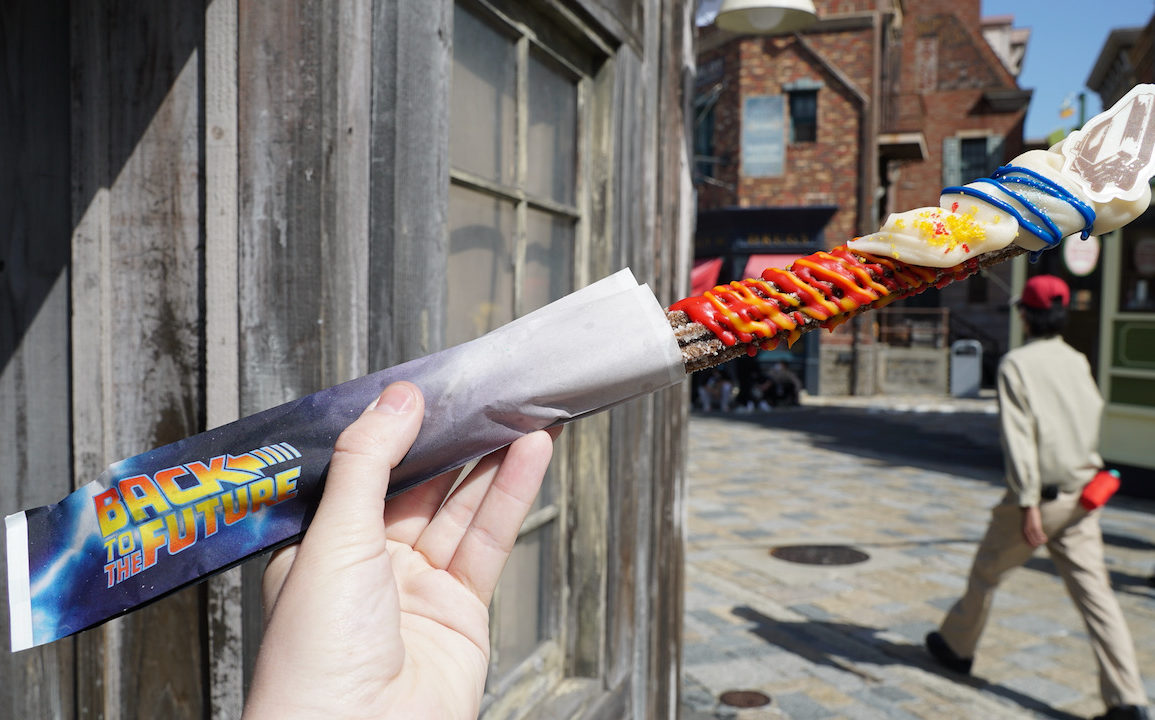 As part of Universal Studios Japan’s 20th Anniversary celebration, there’s all kinds of food themed to past and present Universal Studios Japan properties on sale, from a JAWS-themed hot dog to a black pepper Terminator 2: 3-D bun! The latest we got to try features an attraction known, loved, and missed by many—Back to the Future: The Ride! To commemorate the now-defunct attraction, there’s a special new churro featuring a chocolate DeLorean topper, but the taste may not be what you’d expect!

Available at the NO LIMIT! Market in the New York area of Universal Studios Japan, the DeLore-An Churro is sold alongside the other dessert option at the market—the E.T. “I’ll Be Right Here” Chocolate Crunch Sundae.

The churro itself is about a normal size. As for all themed churros we’ve tried at Universal Studios Japan, the flavoring and icing is atop a chocolate churro base.

The exposed part of the churro is the only section with any real icing and flavor to it. The red and orange “flame” trails are flavorless, whereas the white “smoke” carries the namesake white bean paste flavor. A white chocolate DeLorean hangs off the very end.

Meanwhile the wrapper bears the Back to the Future logo along with a lightning strike.

Here’s where we get to the bad news—the churro isn’t great. For one, as we’ve noticed many, many times with Universal Studios Japan’s special flavored churros, the flavored icing they put on the end causes the churro to get cold quickly, eliminating half the point of the churro. On top of that, white bean paste is not a flavor most folks who aren’t Japanese will be familiar with. Obviously we do not match that target, but if foreign Guests are allowed back in, this may be a snack to miss.

For those unaware, white bean paste is a lighter and slightly less sweet version of the popular azuki red bean flavor. If you enjoy azuki flavor, you may also enjoy the DeLore-An churro. But otherwise, this is probably a pass from us. However, the design of the churro, the chocolate topper, and the wrapper are excellent!

If you’re looking to snack on the DeLore-An Churro, you can find it at the NO LIMIT! Market at Universal Studios Japan throughout their 20th anniversary celebration. Be sure to let us know in the comments below if you want to try this Japanese-American fusion of a treat, or whether you miss Back to the Future: The Ride!