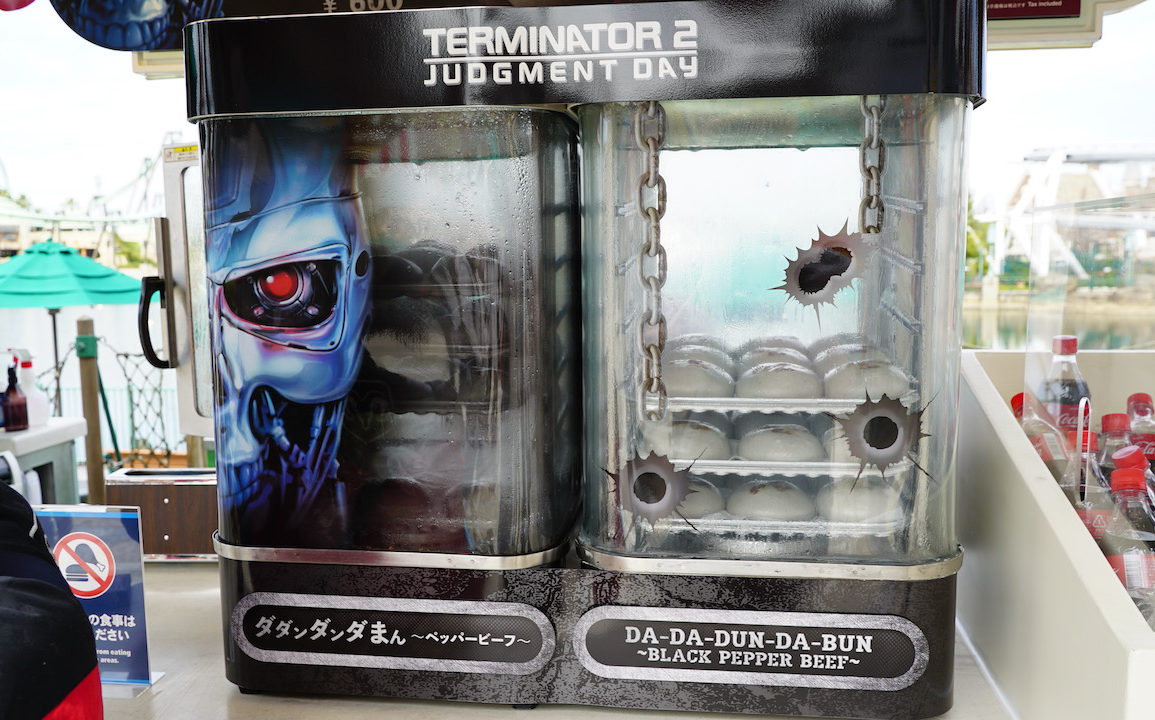 Universal Studios Japan has rolled out several treats themed to the classic properties at the park, from JAWS to Back to the Future and many between! One in particular pays tribute to a beloved attraction that you may remember fondly—Terminator 2: 3-D! While long gone in Hollywood and Orlando, the iconic film still has a home at Universal Studios Japan in Osaka! So naturally, we made our way to the NO LIMIT! Market in New York to give it a taste test.

Because these are steamed buns, they’re kept in very steamy special containers that won’t be unfamiliar to anyone who has ever visited a Japanese convenience store. But don’t worry, they themed the containers quite well, with both a shot of the Terminator endoskeleton along with chains and bullet holes.

The bun comes in a themed wrapper, as you’d expect from a Japanese theme park.

Outside, the words “Da-Da-Dun-Da-Man” are printed in Japanese text (man translates to bun in English). The outside is gray with edible gold flecks.

The themed wrapper itself comes with this ominous terminator endoskeleton shot along with the Terminator 2: Judgment Day logo.

Plus when you get the bun, Crew Members play the iconic “Da-da-dun-da-dun” sound when they present your snack to you! It’s always nice when they go the extra mile!

And how does the bun taste? Well the “black pepper beef” moniker sure isn’t a lie, as the pepper taste is extremely prominent. Not to say it’s bad by any means, it’s quite excellent and the opposite of what I’d expect from a steamed bun. Most bun fillings from just about anywhere are rather bland flavors compared to this, so getting a strong black pepper taste makes this bun feel like a worthy purchase. Additionally, the beef mush within is proportionally balanced with the black pepper sauce. Everything about this experience was perfect, and we can’t recommend the Da-Da-Dun-Da-Bun enough!

If you’re looking to sample this Terminateriffic savory snack for yourself, you can find it at the NO LIMIT! Market at Universal Studios Japan throughout the 20th Anniversary celebration this year! But you’ll have to wait a bit longer to see Terminator 2: 3-D again, as its temporary closure since September of last year is still ongoing, with no end date in sight.