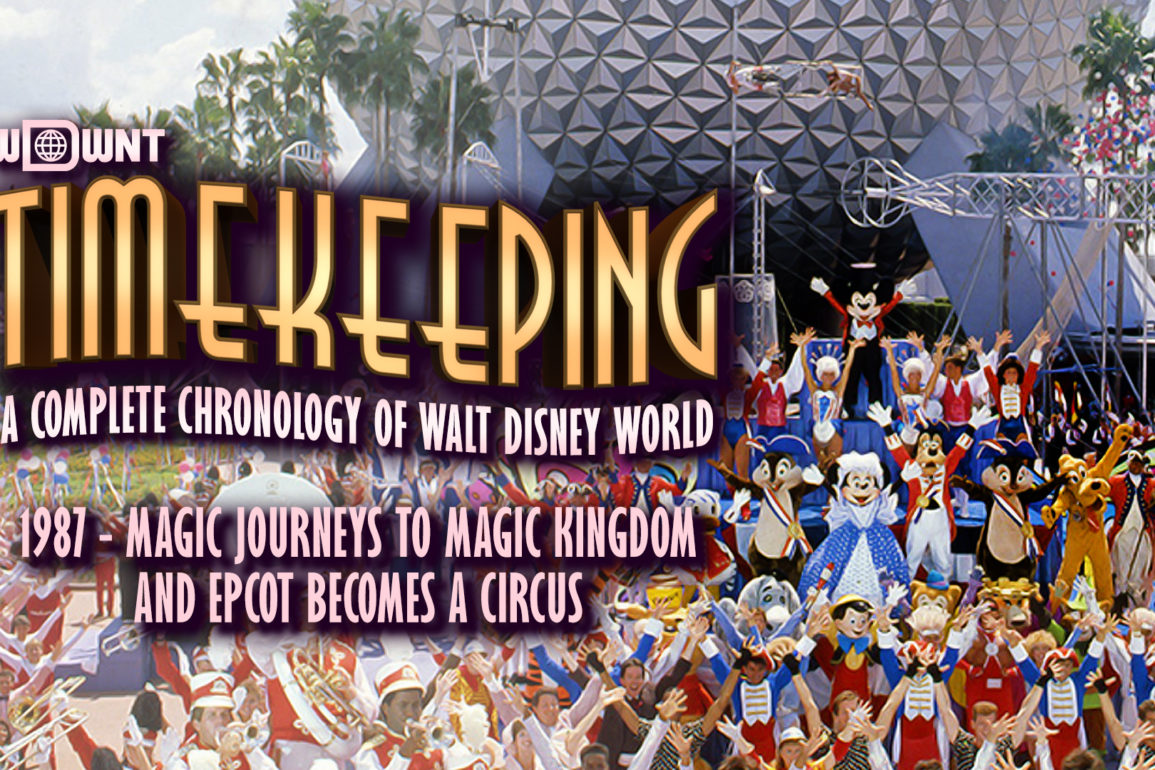 After a busy 1986, Walt Disney World saw a relatively mild 1987 as construction continued on several large projects. While the resort was expanding outside its current offerings, the existing parks and resort saw modernization, with a variety of name changes and rearrangement of shops and facilities, as well as a few smaller changes to offerings. The continuation of Disney World’s 15th birthday celebration was still the driving force for most of the year, but other entertainment including a high-flying circus kept the crowds coming as the resort grew.

Walt Disney World’s flagship park saw a few changes but few of them were more than name changes. In Adventureland, Oriental Imports and the Magic Carpet became The Elephant’s Trunk in April. Frontierland saw the Westward Ho wagon, and the Brier (sic) Patch shop actually opened in late 1986.

In Fantasyland, Magic Journeys would open in the old Mickey Mouse Review Theater on December 15th, with the Chip and Dale short, Working For Peanuts as a preshow.

The Fantasyland Kiosk took on the name Nemo’s Niche. In Tomorrowland, with the loss of Eastern Airlines as its sponsor, “If You Had Wings” reopened as “If You Could Fly” on June 6th. American Journey and Mission to Mars both lost their sponsors as well, and GE and RCA became co-sponsors of Space Mountain after the latter was acquired in 1986.

With the end of the 15th Anniversary celebration, Magic Kingdom was due for a new parade, and on September 20th, “We the People All-America Parade” began. The parade starts with a marching band, followed by Mickey and Minney in a gazebo on top of the Constitution, whose 200th anniversary the parade was celebrating. Next came a lighthouse float to represent New England, followed by a boathouse and Captain hook riding a small boat. After that were scarecrow-dressed dancers around a silo and the Country Bears on a hay wagon, and the barn float still used in the Halloween parades. Donald and Daisy then arrived on a large steamboat float with dancers. A series of old west rockwork floats came by including one with a miner, and Chip and Dale as Native Americans, and Goofy on a horse as a cowboy. The next unit was a wilderness lookout tower and an old mill. The next set of units were led by bicycle and skateboard dances, Winnie the Pooh, a Beachboys Coverband in a mock-up water park, and Tigger surfing and ended with the mirror castle float with a variety of characters including the Gummi Bears.

After an eventful 1986, Epcot also saw less dramatic changes in 1987. The Beverage Base opened next to Stargate in Communicore East and in Communicore West an unnamed on the map shop opened. In Mexico, El Ranchito del Norte opened outside the pyramid on the lagoon side of the promenade. In the House of Whispering Willows exhibit area of China, “Artistry in Time” an exhibit of 18th-century timepieces that replaced the Treasures of the Forbidden City. Inside the American Adventure, the “We the People” exhibit opened. Fashions from Fez replaced Meknes Potters as some shop locations appear to have shuffled around Morocco. A cart near the fountain opened in France selling additional French souvenirs. In Canada, La Boutique des Provinces opened on the upper-level September 24, 1986, and a souvenir cart opened on the promenade.

Entertainment at the Parks

While keeping track of all entertainment acts has been impossible, the 1987 EPCOT Center did feature the Daredevil Circus Spectacular with highwire acts, trapeze artists, acrobats, motorcyclists, and elephants performing in Future World several times a day in a half-hour show.

Here’s a list of other World Showcase entertainment from the first week of November 1987:

In Future World the Robot Gyro met outside the Universe of Energy and T-Bone Brass, Future Corps, and Future World Brass played in various locations.

Back over at Magic Kingdom, Town Square would host the World Band concerts and the Flag retreat Ceremony. Master sculptor Gerhard Shroek from the Goebel Company appeared at the Upton Jewelers, and the Coke Corner Piano appeared at the end of Main Street. JP and the Silver Stars Steel Drum Band performed in Caribbean Plaza. Over in Liberty Square, The Sons of Liberty Fife and Drum Corps and the Spirit of America Singers performed at different times. The Fantasy Faire Stage in Fantasyland hosted the Follies Trio. A band called Tabasco playing contemporary cover songs played the Tomorrowland Terrace stage, where Sonny Eclipse now sits, and the Tomorrowland Theater Stage hosted “America the Musical.” Both parks also hosted Magic Music Days featuring high school bands.

While not much was opening in 1987, many things were under construction at this time including the Grand Floridian, Pleasure Island, Typhoon Lagoon, Caribbean Beach, the Norway Pavilion, and Wonders of Life… oh, and the Disney-MGM Studios.

On October 2nd, Disney Dollars in $1 and $5 denominations came to Walt Disney World, having debuted at Disneyland in May.

Both Disney’s Contemporary Resort and Disney’s Polynesian Village Resort saw updates. On the Grand Canyon Concourse, Bayview Gifts took over the Monorail Club Car Bar as the main shopping area was replaced. The Grand Ceremonial House saw extensive changes, most notably the replacement of the checkered tile. Robison Crusoe, Esq. shop changed name to Crusoe and Son and moved to the Polynesian Princess location, which, along with News From Civilization, moved down the hall. The fronts of the shops became window walls. Island Ice Cream Company became Captain Cook’s Snack and Ice Cream Co. on April 16th. Guest Services took over the old News From Civilization location. In addition, the walkway to the Transportation and Ticket Center was opened, the main pool was refurbished, and the Luau got several backstage upgrades.

Over at the Village Marketplace, several shops had changed over the last few years. Artespana opened in 1986, in the same building as the combined Village Ice Cream Parlour and Bake Shop and Minnie Mia’s Pizzeria, which displaced the Verandah Restaurant. On April 19, 1987, Team Mickey’s Athletic Club replaced Shoe Time, Plus You, and Miss Merrily’s Fashions. At some point since 1981, Heidelberger’s Deli became the All American Sandwich Shop, sponsored by Hormel, Country Address moved to replace Village Gift and Sundries, and its spot had become Resortwear Unlimited. Mickey and Co. replaced Satchet In and Bath Parlor in 1984.

Overall, the average guest would have probably noticed little difference in 1987 from recent years. A few name changes and a “new” 3-D film were simple were not exactly huge draws. The focus was elsewhere as new hotels, an entertainment district, and a water park were all to open the next year—well, at least they were scheduled to do so.