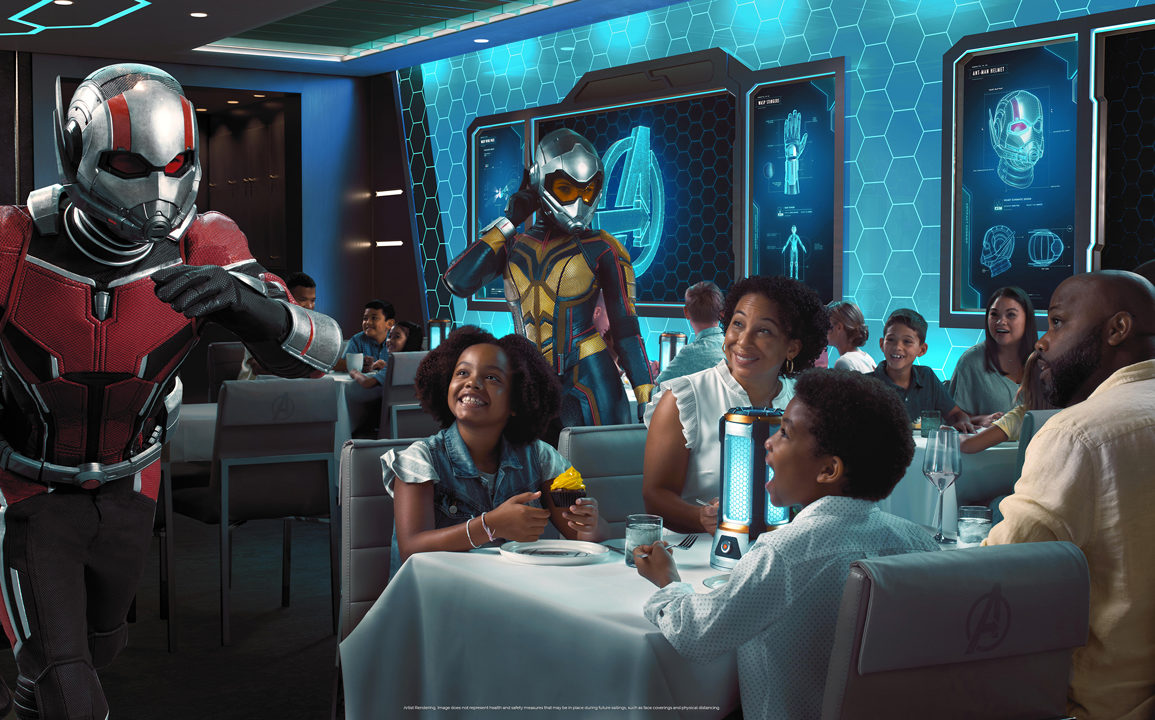 After teasing an announcement yesterday, Disney Cruise Line has released more information about the “Quantum Encounter” coming to Worlds of Marvel on the Disney Wish.

Worlds of Marvel is the first-ever Marvel cinematic dining adventure, where you’ll play an interactive role in an action-packed Avengers mission that unfolds around you, complete with a worldly menu inspired by the Marvel Cinematic Universe.

Disney Parks Blog describes Avengers: Quantum Encounter as “Disney Cruise Line’s most ambitious dining experience ever. This exclusive Avengers adventure will assemble some of Earth’s Mightiest — and tiniest — Super Heroes in a larger-than-life showcase of revolutionary quantum technology and world-class cuisine. It’s more than a meal and more than a show: It’s something that’s never been done before in a restaurant on land or at sea!” Read more below.

“Avengers: Quantum Encounter” will follow Ant-Man and The Wasp as they embark on their first public speaking engagement on behalf of the Avengers. They are hosting a special presentation of the most powerful Super Hero technologies — such as Captain America’s shield, Iron Man’s arc reactor, and Ant-Man’s Pym Particles — giving the audience an up-close look at holographic models, field reports and iconic scenes from the Marvel Cinematic Universe displayed on the screens surrounding the room.

The highlight of this special event is a hands-on demonstration of the latest and greatest Pym Tech, the Quantum Core, which uses cutting-edge (and highly unstable) technology to shrink and grow targets at the push of a button. A few “misfires” will result in hilarious Ant-Man-style hijinks, but the real trouble begins when an unexpected villain shows up with a fearsome army in tow, eager to get their hands on this powerful quantum technology.

Ant-Man and The Wasp will need all the help they can get to save the day, calling on Captain America, Captain Marvel and the brave diners of the Disney Wish for back-up. (That means you!)

Every table at Worlds of Marvel will feature its own Quantum Core, “a brand-new device that can cause objects to shrink and grow remotely.” During dinner, you will assist Ant-Man and The Wasp as they attempt some small-scale trials, perhaps shrinking oversized luggage for easy stateroom storage.

When enough of the Quantum Cores are activated at the same time, the entire venue will become supercharged as energy pulses through the power channels in the walls and ceiling.

Menus are still being developed but Worlds of Marvel will offer dishes inspired by Wakanda, Sokovia, and the Avengers’ home base of New York City.

Watch a video about the experience, introduced by Marvel Studios President Kevin Feige, below.

Previous
PHOTOS: All Pavilion Flags Removed From Entrance to EPCOT