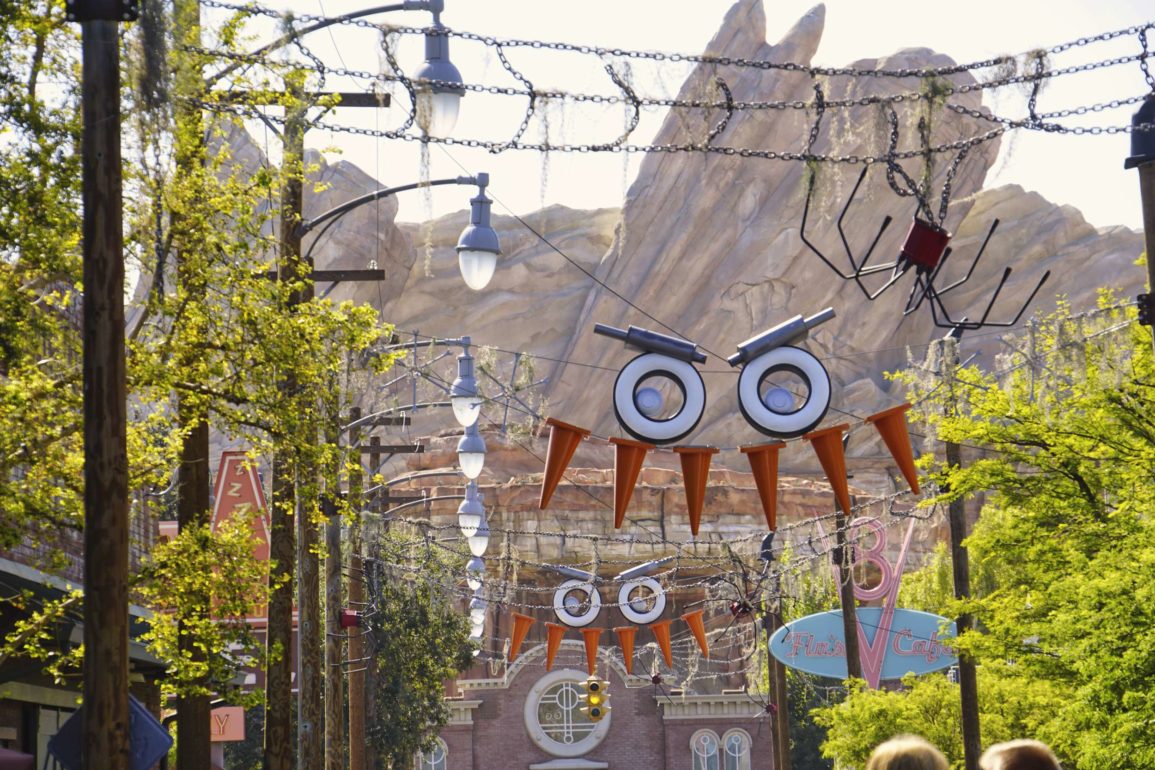 We had a very busy day checking up on all the Halloween decorations going into the park and we found tons of new merchandise along the way. Come along with us as we run all over the Disneyland Resort!

Halloween is fast approaching and we saw signs of it all over both parks. At Carthay Circle Restaurant, the “All Hallows’ Eve Celebration” is about to kick off.

We also found a few things that aren’t necessarily Halloween related, but will definitely get you ready for the Fall weather.

These spooky shiny Nightmare Before Christmas Minnie ears are the perfect compliment to any of the new Halloween apparel released recently.

These Cruella dresses are just fabulous. They recreate some of the incredible dresses from the Disney+ film, but in a more practical, wearable way.

There is also a shirt, a jacket and more in this collection.

This new Star Wars Visions t-shirt is very stylized and brings a whole new dimension to the galaxy far, far away. We found this at Elias & Co.

The Magic Key Terrace opened yesterday, and we dropped by to try some park-themed cocktails and bites.

Ant Man and Captain Marvel were out greeting guests from the roof of Avengers Compound today.

While in Avengers Campus, we found a couple of cool new shirts honoring Spider-Man and a Hulkoween shirt. There’s just no escaping the firm embrace of Halloween merch everywhere you turn.

Cars Land is gearing up for their annual Haul-o-Ween celebration. We saw these toothy grins hung up the other day, but a lot has been added since then.

Across the street at Mater’s Junkyard Jamboree, monster cars have risen from the scrap heap.

The Cozy Cone Motel is getting into the spirit of the season with their Jack-Cone-Lanterns.

And Flo’s V8 Café is covered in webbed chains.

Around the corner at Ramone’s Serv-Ice, we spotted some new reusable straws that are part of the “Fun, Eat, Repeat” collection.

The Boudin Bakery is open and giving out samples once again. Guests hungry for a complimentary slice of soft, fluffy sourdough rejoice!

Over in Grizzly Airfield, the billboard is covered in scaffolding and scrim for a refurbishment.

On a day like today, with temperatures in excess of 95° for hours at a time, nothing sounds more appealing than a trip down Grizzly River Run.

Before we park hopped, we took a stroll through Downtown Disney and the first thing we had to try was a bite of these S’mores Beignets from Ralph Brennan’s Jazz Kitchen.

These chocolate glazed beignets are dusted in graham cracker crumbs and served with a thick marshmallow dipping sauce. You can read our full review here.

While scarfing down our beignets, we noticed these unique planter displays. They seem like scattered individual objects, but when you walk around the side…

… you can see them start to take shape.

When viewed from just the right angle, they make up some of our favorite Disney friends.

Halloween may be all over the parks right now, but at the Disney Home store, Christmas is ready to set in. These 2021 ornaments are ready for those very early birds who want to get a real jump on their Christmas tree decorating.

But Halloween is still the name of the game everywhere else. We found these new Baublebar pins at World of Disney.

We also found a couple new “Hocus Pocus” apparel pieces at World of Disney, and then spotted them in Disneyland’s Emporium later.

Down at The Wonderground Gallery, we came across the new Nanako Kanemitsu Artist Series collection. We saw this backpack at Walt Disney World as well, but Disneyland has the full collection.

It’s Princess Week and to celebrate, the former AMC in Downtown Disney is decorated with some of our favorite princesses. Banners are hung around the outer posts and the windows of the former ticket booth are covered in decals. You can see all the princesses below.

Moana is honored with an art piece displayed in front of the currently closed Monorail station. This large photo op also includes standing signs with information on Princess Week as well as digital goodies.

In the Disney-owned shops of Downtown Disney, these Princess Week buttons are being given away. World of Disney blew through their entire week’s allotment in just a few hours, but we found some still available at The Dress Shop.

Way down at The Disneyland Hotel, we found some new (to us) merchandise celebrating Trader Sam’s Enchanted Tiki Bar. This mug and bowl set, and the cup, have been seen in Walt Disney World but they are brand new for Disneyland.

After exploring all there is to see in Downtown Disney, we headed into Disneyland to finish up our day. Main Street, U.S.A. is being overrun with pumpkins and festive garlands for the Halloween season.

No two pumpkins are alike, and it’s fun to see all the different expressions and uses that the Disney artists have come up with.

The Gibson Girl Ice Cream Parlor is open once again today. It was closed earlier in the week.

Over at The Mad Hatter, even the pumpkins have hats on.

We found a new set of Minnie ears featuring cuddly versions of The Nightmare Before Christmas characters.

And a new embroidery option allows Magic Key holders to have this achievement stitched into their hats.

In addition to the stylish embroidery, Key holders can also take advantage of a special photo op to meet Mr. Toad in person.

Making our way to Toontown, construction walls still line the entrance to the land. Turning back to face the Matterhorn makes for an interesting view.

Donald was out today to greet guests from the bridge of his house boat.

(De)construction continues in Downtown Toontown as the space is cleared for Mickey and Minnie’s Runaway Railway. Here, the former Gag Factory is almost entirely gutted.

Over in Tomorrowland, even the droids are getting in on the Halloween theme.

The scaffolding and scrim that surrounded the Monorail platform just a few days ago has been almost entirely removed.

In New Orleans Square, amidst the massive refurbishment of the second floor balconies, there is something new at Pieces of Eight. This Loungefly backpack features cuddly versions of some Pirates of the Caribbean scenes and characters.

Even from a distance, we can see the changes happening at The Haunted Mansion.

Jack Skellington and his friends from Halloweentown are moving in to make Christmas at The Haunted Mansion. Jack sits out front pondering a snowflake, and the sign for the attraction overlay has been hung. On the mansion, Jack’s sleigh has crash landed on the roof and his decorations have spilled out all over the mansion’s roof.

The clock is hung, but has yet to be set as it counts down days to Christmas.

Elsewhere, we found this really cool t-shirt with Jack in front of The Haunted Mansion at Disneyland, dreaming up the holly jolly horrors he will unleash.

Well that’s it from us here at the Disneyland Resort. We’ll see ya real soon!