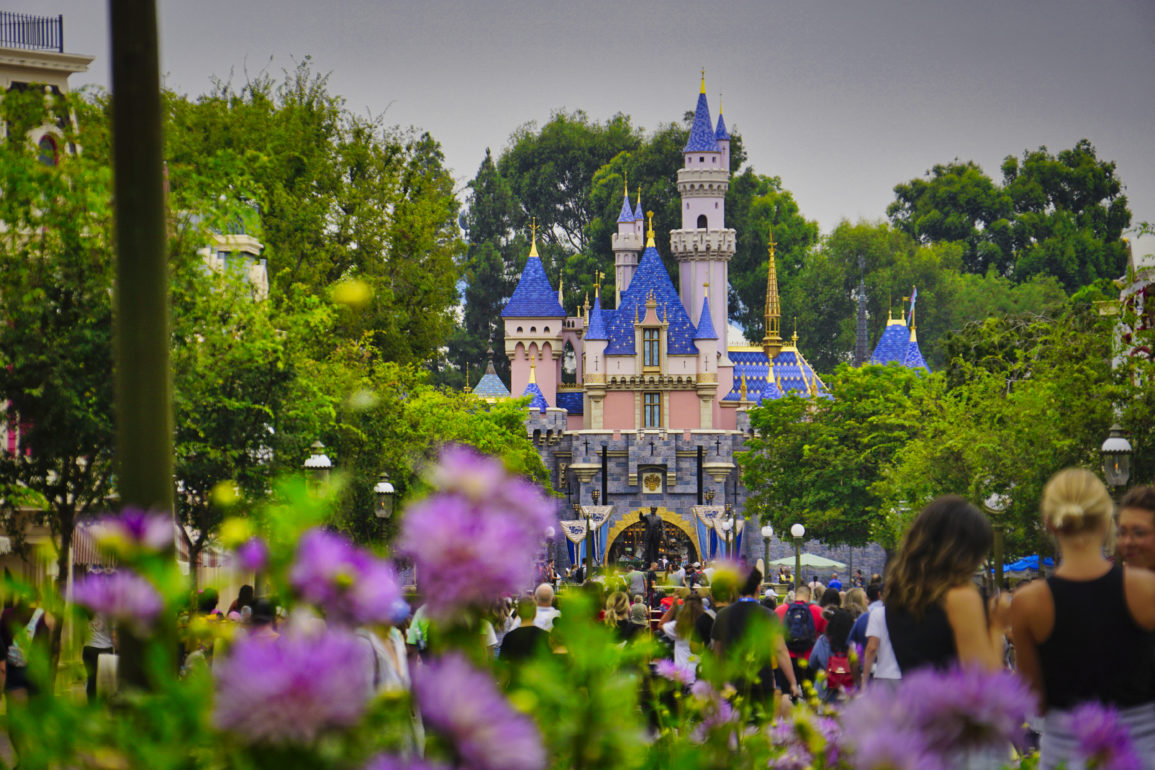 We haven’t been over to Disneyland in a couple of weeks, so it was high time to check in on some things at The Happiest Place on Earth. Join us!

We started our day off at Disneyland before park hopping. The midsummer crowds were surprisingly light. It’s likely that guests aren’t coming early in the week and rather waiting until the release of the Magic Key passes on Wednesday.

At the Disneyland Resort, just like at Walt Disney World, face coverings are no longer required in the outdoor common spaces or on outdoor attractions. Masks are still required indoors, as this sign leading into The Emporium states.

The voice of Mickey Mouse, Bret Iwan, released his Artist Series collection today. Titled MM Script, the collection features a backpack, a hat, a hoodie, a sweater, and a shirt. Check out our article to see the full collection.

Further down Main Street, U.S.A., we fell down a rabbit hole of Alice in Wonderland merchandise to celebrate the 70th anniversary of the film. See the entire collection in our post here.

The collection includes housewares, clothing, and accessories that feature the artwork of Disney Legend Mary Blair, who did concept art for the film. Some of this collection can also be found at Walt Disney World.

We found some of the D-Flair pins at 20th Century Music Company that are themed to memes and the 1980s.

Getting ready for the spooky season, these Hitchhiking Ghosts want to come home with you. We found four new Funko POP! pins — one of each Hitchhiking Ghost and a lenticular pin featuring all three in a Doom Buggy.

Speaking of spooky merchandise, the Disneyland Resort has been taken over by Halloween souvenirs. We found this whole collection in The Emporium, but much of this merchandise is available resort-wide. See all the Halloween merchandise at Disneyland with prices in our article here.

This is the perfect sweater to wear to the upcoming Oogie Boogie Bash at Disney California Adventure.

While most of the park isn’t kicking off Halloween until September 3, Davy Crockett’s Pioneer Mercantile in Frontierland has already put up some decorations.

Harvest corn and fall foliage have been hung on posts outside.

Standees on the boardwalk out front make for a great family photo op for the season.

Inside, pumpkins line top shelves, and Jack-o-lantern garlands are hung over the cash registers.

Across the street, Rancho del Zocalo has gotten into the spirit of the season as well with their Dia de Los Muertos decorations. Sugar skulls and festive marigold garlands are strung about the menus.

Above the fireplace, an ofrenda is laid out featuring some of the alebrijes seen in “Coco.” Outside, papel picados have been hung.

Big Thunder Mountain Railroad will be going down for a refurbishment on September 7, as was announced recently.

Dreams do come true in New Orleans, and if your dream was a total refurbishment of the second floor balcony façades, then you’re in luck. These massive scrims hide some of the work being done to make New Orleans Square sparkle like the Jewel of the South always should.

Further along in New Orleans Square, Jack Skellington and his friends from Halloweentown are making Christmas at The Haunted Mansion. On September 3, Haunted Mansion Holiday will once again deck the haunted halls to bring a holiday tradition that was sorely missed last year.

Between the slats of the fence, we can see pumpkins laid out in the graveyard.

And through the not-so-opaque scrim backed by sunlight, we see the iconic Jack the Pumpkin King scarecrow, ready to be raised into position in front of the mansion.

Splash Mountain is still running, but its days are numbered. We recently got to take a look at some of the concept art and learn some story details about the upcoming overhaul coming to the ride, retheming it to “The Princess and the Frog.”

In Pooh Corner, we found a whole collection of the merchandise first seen at the United Kingdom pavilion in EPCOT.

In Tomorrowland, work is being done on the entranceway to the land. Concept art informing us of the new look is found on the construction wall.

Elsewhere in the land, Finding Nemo Submarine Voyage is currently closed for a few months. These are some seriously cute construction walls, however. A nice consolation for not seeing the glittering lagoon.

Stitch was out today, waving hello from the second story of the Innoventions building.

Toontown is a mass of construction and confusion at the moment. A small choke-point funnels guests between the “it’s a small world” Toy Shop and the minimized walkway into the land. Luckily the crowds weren’t big today, or else this would be a traffic jam waiting to happen.

Upon entering the land, the Downtown area is completely overtaken by the construction of Mickey & Minnie’s Runaway Railway.

Buildings are being torn down to make the entrance to the ride, and above the fence, we can see their progress.

The entrance to the former Gag Factory store is being removed to make way for the new ride’s entrance.

But all is not lost. The toon characters were out to see and be seen across Toontown. Pluto greeted guests outside Goofy’s garden.

And the main mouse himself waves goodbye as we leave Disneyland behind and head across the way.

At Disney California Adventure, the park is gearing up for the Oogie Boogie Bash. The master of scaremonies presides over the park with bats flying out of his shadow.

And the frights just keep coming, as Cars Land readies itself for Haul-o-ween.

We stopped by Clarabelle’s Hand-Scooped Ice Cream to enjoy a sundae from this new Together Again ear hat bowl.

While the Halloween merchandise can be found resort-wide, there is also some new Halloween-adjacent merchandise too. This Maleficent Dragon Spirit Jersey is available at Elias & Co.

In Avengers Campus, there’s nothing new per se, but the land itself is the newest offering to come to the park. And come on, how cool is this? Loki looks down on the passing guests after escaping Avengers Compound.

Iron Man himself was on-hand to greet guests outside the compound.

And it appears that Spider-Man may be having a containment problem with some new tech coming out of WEB labs.

We take one last look at the entrance of the Legacy Passholder lounge in the Alfresco Tasting Terrace at Golden Vine Winery before it becomes the Magic Key Lounge on Aug 25.

Thanks for coming along with us for a tour of Disneyland and Disney California Adventure. We’ll see ya real soon!

Previous
30 Years of Fear – A History of Universal Orlando’s Halloween Horror Nights: 2003 (The Director Will See You Now)