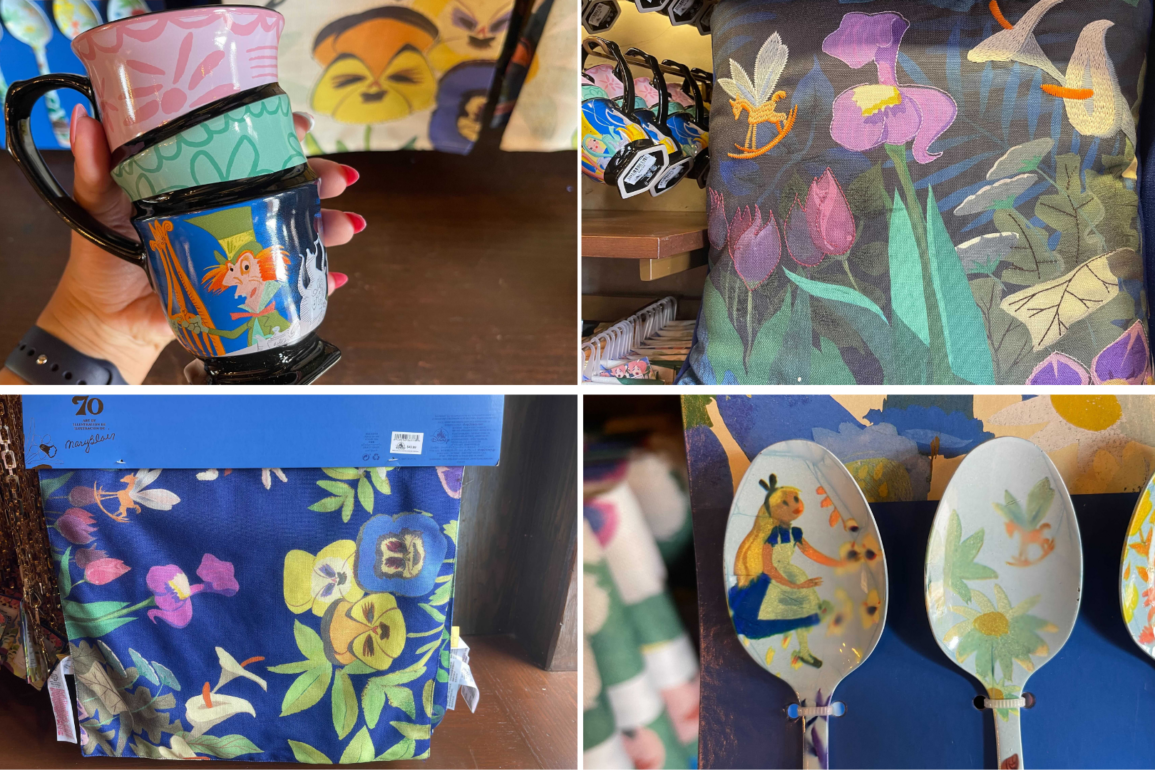 To celebrate the 70th anniversary of “Alice in Wonderland,” a new collection of housewares and accessories have debuted. Featuring the concept art done for the film by Disney Legend and artist Mary Blair, the art on this collection captures the colorful, topsy-turvy world of Wonderland that Blair helped inspire, while her distinct art style brings a sense of class and refined elegance to the collection. We found these pieces at The Queen’s Table in the United Kingdom Pavilion of EPCOT.

This reversible table runner features a colorful print of Alice with her croquet mallet flamingo surrounded by the flowers of the Golden Afternoon sequence on the outside.

The inside features a pale blue linen embroidered with sky blue threaded flowers.

Many of the houseware textiles of this collection feature a Mary Blair signed tag.

This throw blanket depicts the Golden Afternoon scene as Alice learns a lot of things from the flowers.

The throw pillow features a print of the flowers from the Golden Afternoon sequence outlined in embroidery. The rocking horse fly and the lilies are fully embroidered, while many of the others are outlined or accented in other ways. Mary Blair’s signature on her artwork is also featured prominently.

The bag strap is made to look like a certain rabbit’s pocket watch, informing the wearer of lateness while looking sleek.

Using these clasps, the bag strap can be attached to purses or bags found elsewhere. It would be a lovely compliment to the recently-released bags from Harveys that we found in Magic Kingdom.

These tea towels, like the throw pillow above, feature a print that is accented and outlined with embroidery.

Though it may look like several cups, this is actually just one larger mug featuring Blair’s designs of the Mad Hatter and Alice sharing tea at an Unbirthday party.

This beautiful set of spoons is the perfect compliment to pair with the above mug for a tea party or any other occasion. Each of the four is printed in a different design, featuring Alice on one and flowers on the rest.

These three headbands are sold as a set in one cute box.

The first headband features the same elements as the rest of the collection — flowers and Alice — scattered around in a print.

The second headband features a simple fabric with tiny metal bread-and-butterflies dispersed around.

The final headband is a black velveteen material with a large bow, closely resembling the bow that Alice wears in the film and the other art in the collection.

Are you going to go down the rabbit hole with this new Mary Blair ‘Alice in Wonderland’ 70th anniversary merchandise collection? Let us know in the comments below. For more new merchandise releases from Walt Disney World, check out these new Disney nuiMOs coming to the parks and shopDisney for Halloween, and don’t miss this new Disney’s Wilderness Lodge tote we just found at Wilderness Lodge Mercantile.

Next
Space Mountain Little Golden Book to Blast Off this Winter