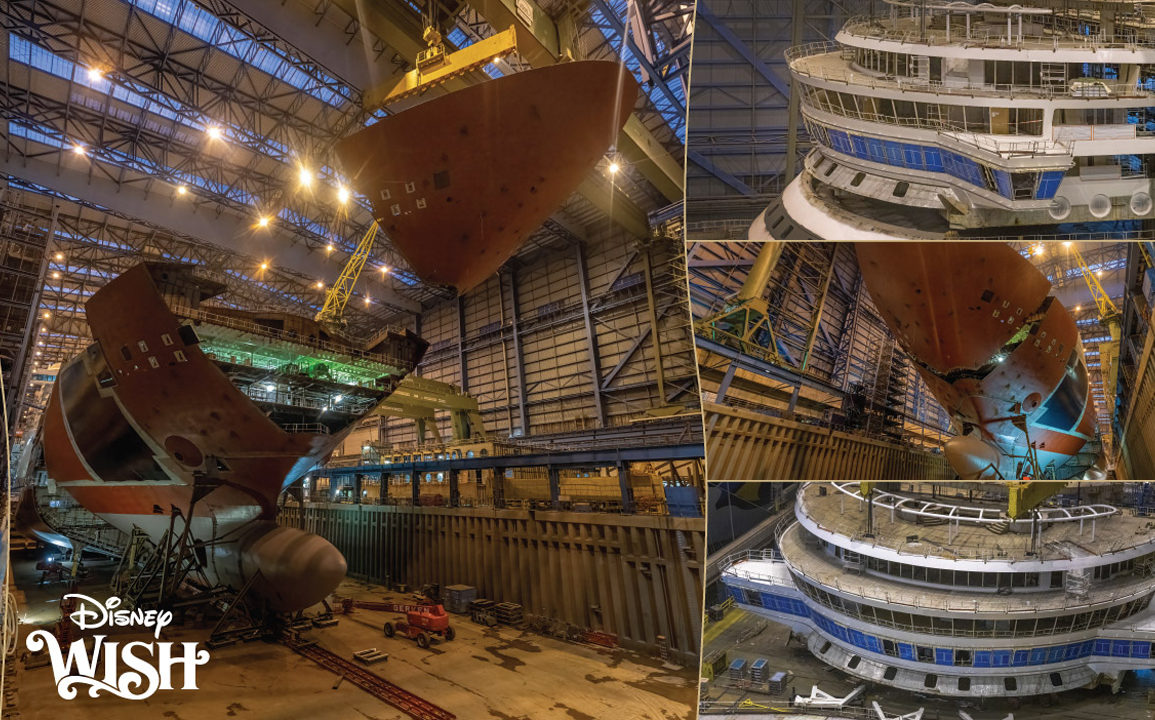 PHOTOS: Inside Look at Construction of Disney Wish Cruise Ship in Germany

Here’s what Gennotte had to say about the installation of the ship’s wheelhouse and bow.

The wheelhouse, also known as “the bridge,” is an incredibly important part of any ship. The captain and officers command the entire ship from this location.

The wheelhouse for the Disney Wish is nearing completion and is part of a huge block to be installed on the ship in the building dock. We have all eagerly awaited this moment, as this block will truly give the Disney Wish an identity. I would even go as far as saying that it gives our ship a face!

The wheelhouse was very carefully designed both from a navigational and functional means but also from an aesthetical point of view. With the lifting and installation of this very large and very wide block, the next milestone in the impressive construction process is achieved. The second main building part of the Disney Wish, the entire foreship, has now been constructed.

The next step will be to get the first building part, the so-called gigablock, to be “married” to the foreship. Following this, the remaining aft blocks will be lifted and installed to complete the entire ship. So more to come very soon!

All the ships in our fleet have very elegant lines with sleek hulls and long bows, and the Disney Wish will certainly carry on this tradition. As construction of our newest ship is progressing at full speed, another important milestone has been achieved.

Just installed is the impressive bow of the Disney Wish, where Captain Minnie will be featured in a beautifully designed medallion and filigree. As part of the shipyard’s high-tech block building principle, the bow block has been lifted and installed to reveal the graceful bow of the Disney Wish. This block is just one of nearly 100 total blocks, and the tip of the bow alone weighs an impressive 500 metric tons!

The entire process of lifting, installing, and fully welding the bow block, while being suspended from the overhead gantry crane, took just under 10 hours.

Following the successful installation of this bow block, there are just over 30 blocks remaining to be installed in the coming weeks to complete the Disney Wish in time for the ship’s maiden voyage in June 2022.