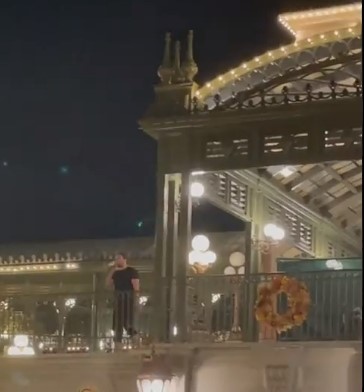 When nighttime spectaculars returned to the Magic Kingdom, many fans had hoped to see the “Kiss Goodnight,” the closing announcement and changing castle lights, return as well. It did not, but now Disney has added a new way to say goodbye with an uncostumed DJ making announcements from atop the Main Street Train Station.

See the DJ in the video below from Twitter user @MickeyViews.

The DJ also plays music, such as “Party in the U.S.A.” by Miley Cyrus or remixed versions of Disney music. He reportedly reads the closing announcements, including transportation directions from a paper over a microphone. The DJ was present at least two nights in the past week; neither of which had private events or Disney After Hours Boo Bash.

This is certainly a change of pace for Disney. The “Kiss Goodnight” added a little magic to the end of the day; how will guests feel about the new DJ?

Let us know your thoughts in the comments.

Previous
PHOTOS: Living With the Land Fails to Open for Two Days at EPCOT