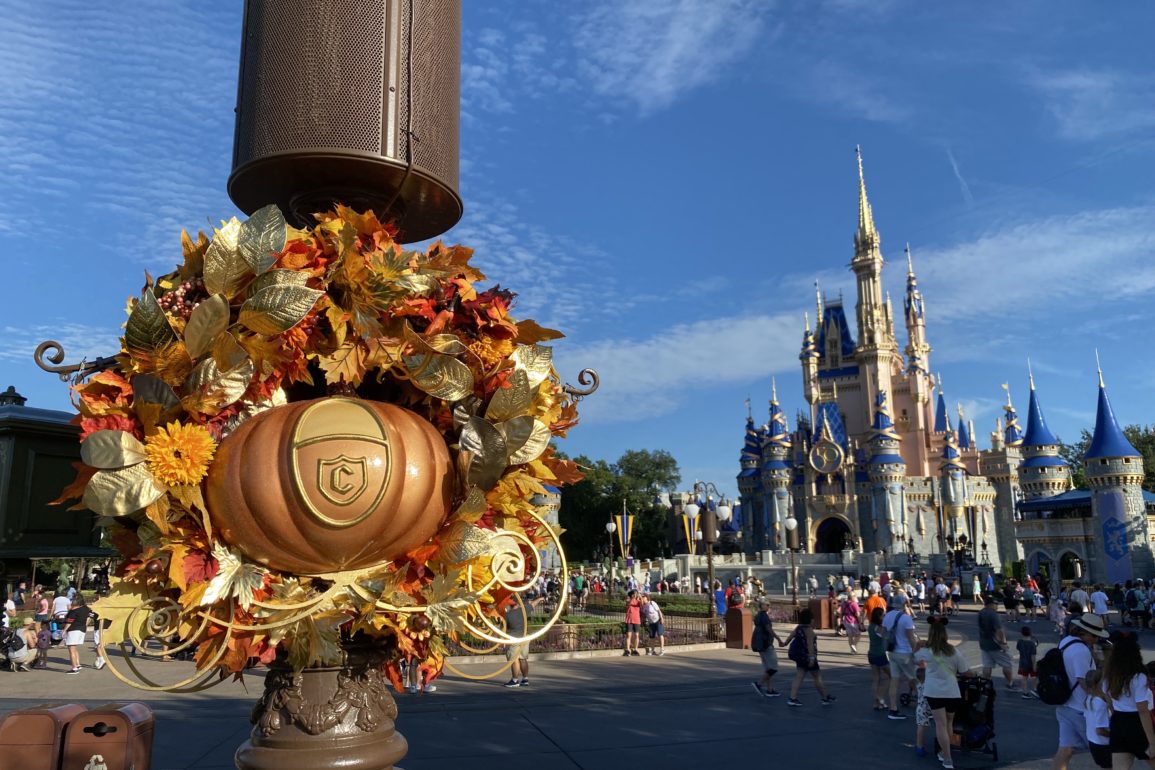 Royal greetings from a rather golden day at Magic Kingdom!

The Main Street, U.S.A. golden lamppost makeover is complete, and they shine along the sidewalks to the castle.

Glittering, golden Cinderella carriage pumpkins glistened in the central hub where they replaced the Mickey pumpkins for the 50th anniversary celebrations.

Orange Bird had a little more room to shine as the chairs that blocked his EARidescent perch were pushed all the way forward. The plant he was tucked behind was removed the day prior.

More scoring for the expansion of jungle green pavement is stretched along to the Adventureland popcorn kiosks.

The far corner of Aloha Isle that used to hold a touchpoint for Sorcerers of the Magic Kingdom has been completely removed.

More staining on the side and back of the Frontierland Train Station facade at Splash Mountain was completed as it continues its refresh.

Pavement replacement on the pathway behind Liberty Square Market is completed.

Cinderella Wishing Well, next to Cinderella Castle, received one too many wishes and was overflowing onto the pathway.

New trees were installed along the pathway to the castle and the well.

Scoring appeared at the FastPass Kiosks in Tomorrowland next to Monsters, Inc. Laugh Floor.

Commemorative Bricks were available again today in Tomorrowland after they were previously unavailable due to stock concerns.

Over at Disney’s Contemporary Resort, the splash zone has been fitted with new blue flooring and the back wall painted.

At Disney’s Polynesian Village Resort, the beautiful water feature that is a central focus of the newly opened entrance, was off and more foliage was planted in front.

Down by the waterside, new railings are being installed in front of the netting at the boat launch dock to Magic Kingdom.

Making our way over to Disney’s Animal Kingdom, Primeval Whirl in Dinoland sees new construction walls up in front of the attraction.

One of the Discovery River Theatre entrances has been blocked off as its seating receives a fresh coat of paint.

The dock for KiteTails sees more movement as housing structures are built up in preparation for its debut.

While Expedition Everest has not received a new Lightning Lane sign as of yet, one of its Fastpass+ signs across the way has been removed from the tree.

Across from Mr. Kamal’s in Asia, Caravan Road now has a sign out showcasing its new menu, hopefully indicating its return soon!

While Kusafiri Coffee Shop & Bakery had a delayed opening, we were there today to try three of its new menu items. Stay tuned for our review!

Restaurantosaurus has construction walls up in front of its entrance in Dinoland U.S.A.

New props were added to the area in front of The Festival of the Lion King.

Thanks for following along today as we made our way from Magic Kingdom to the jungles of Disney’s Animal Kingdom!

Next
PHOTOS: Cinnabon Gets Into the Horror Nights Spirit With New Chucky Display at Universal Orlando Resort