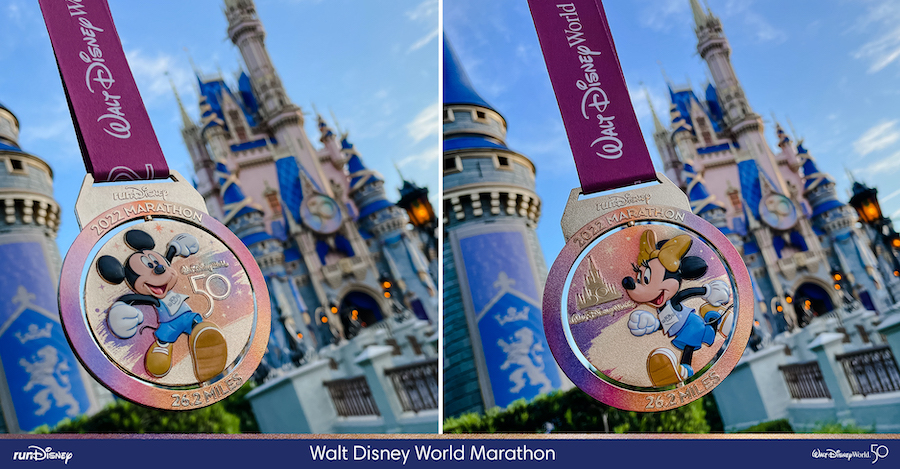 The medals for runDisney’s Walt Disney World Marathon Weekend 2022 have been revealed. Each race and challenge medal features a different character (or pair of characters) ready to run through the parks. This year’s medals are especially EARidescent for Walt Disney World’s 50th anniversary.

Starting off the race weekend on the right paw, Pluto joins runners for a ‘paws’itvely exciting event for the Walt Disney World 5K. This year’s medal features a Pluto-sized medal that spins within it.

As luck would have it, Oswald the Lucky Rabbit will be joining runners for the second event of the weekend, the Walt Disney World 10K. Watch Oswald hop along as he slides from left to right on the medal.

Why you oughtta… celebrate 25 years of the Walt Disney World Half Marathon with this year’s race highlighting our fine feathered friends, Donald and Daisy Duck. Show off both Donald and Daisy with this medal that spins from the middle.

Rounding out the magical miles-filled weekend, give a chEAR for our hosts Mickey and Minnie Mouse, joining runners for the Walt Disney World Marathon. Spin your medal from the middle to feature either of our Marathon Weekend hosts.

Up for a challenge? Runners taking on both the Walt Disney World Half and full Marathon in a 39.3-mile adventure can do so along with our pal, Goofy during the Goofy Race and a Half Challenge. In true Goofy form, things get a little wild with this medal as he spins around on the front side.

Challenge accepted. Runners who make their way through all four races (48.6 miles) can join Dopey and earn some serious bling during the Dopey Challenge.

Watch a video below featuring Matthew Hamel, runDisney Show Director, about how the team is working hard to bring the magic of the 50th Anniversary celebration to the race weekend.