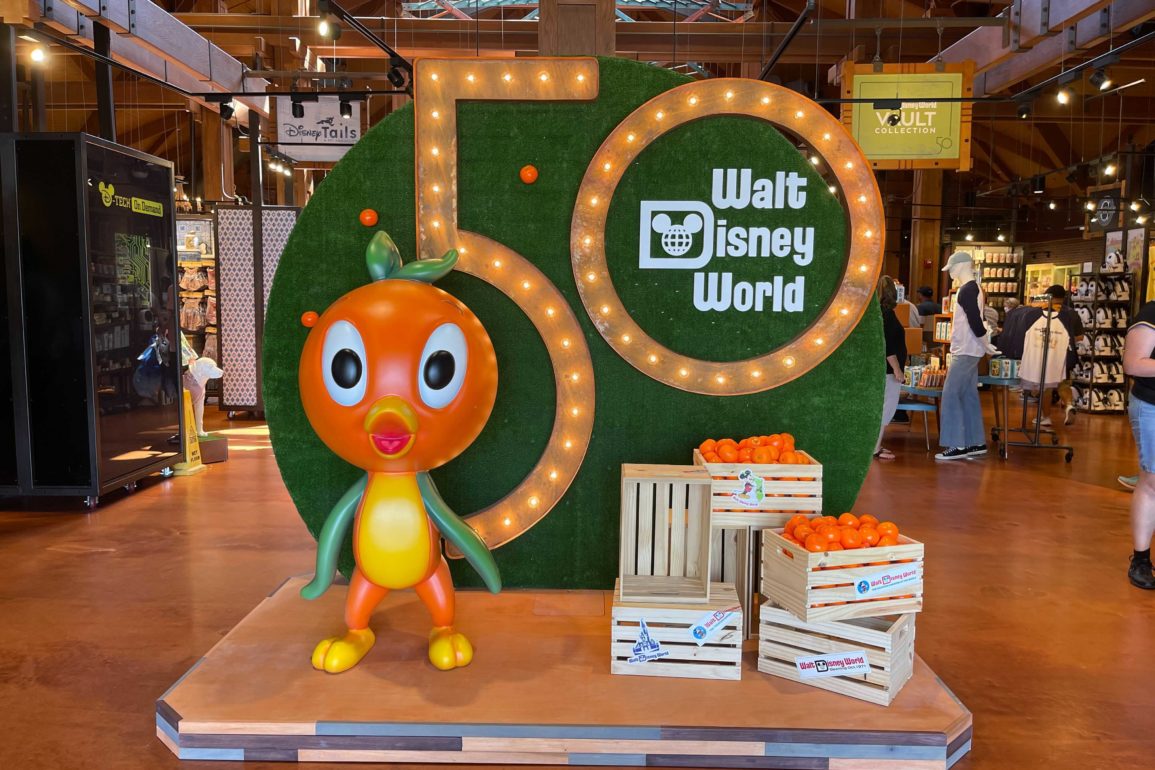 With Walt Disney World’s 50th anniversary just days away, the Vault Collection of merchandise has officially launched at Marketplace Co-Op. And while the merchandise pays tribute to fifty years of The Most Magical Place on Earth, the décor of the shop is just as captivating.

Is it really a celebration of Walt Disney World without the Orange Bird? The citrus-themed character stars in a photo opportunity next to orange crates decorated with vintage-inspired stickers.

Above, banners inspired by those seen in Toad Hall from Mr. Toad’s Wild Ride hang from the ceiling.

But below, guests can take a picture with a car from the classic attraction, which ran from 1971 to 1998.

This display pays tribute to the construction of the resort, with a large photo of Roy O. Disney in front of a still-being-built Cinderella Castle.

Do these antlers look familiar? They belong to Melvin the Moose, one of the mounted spectators of the Country Bear Jamboree! (Don’t worry, he’s grown them back.) Funny enough, this prop has remained from the Twenty Eight and Main store, the original tenant of this space many years ago.

The classic snack, the Citrus Swirl, is represented with this colorful giant replica.

This display is devoted to the attractions that opened with the Magic Kingdom, including beloved past offerings like the Mickey Mouse Revue, the Skyway, and Snow White’s Scary Adventures, along with those still welcoming guests today, like the Mad Tea Party, The Haunted Mansion, and The Hall of Presidents.

One section of the exterior has a wall of vintage-looking televisions, which show clips of Walt Disney World under construction and its early days.

It wouldn’t be Walt Disney World without Walt Disney himself, who appears in a clip from the original E.P.C.O.T. film.

Next to the televisions, this museum-styled display this one focused on The Preview Center, which offered a sneak peek of the resort from January 1970 to September 30th, 1971.

Nearby, shirts with art from the Preview Center stand behind a display of ticket books, used in the resort’s first decade.

Next comes a display of some of the Vault Collection’s offerings, with pictures from the resort’s history, including Disney Springs’ past as the Lake Buena Vista Shopping Village.

Wouldn’t you like to meet the Orange Bird for yourself? (Well, maybe not this one.)

As we’ve previously reported, one of the displays features a hand-drawn souvenir map from the 1970s.

Be sure to look above for even more props honoring 50 years of Walt Disney World. These birds suggest memories of Walt Disney’s Enchanted Tiki Room, previously known in Florida as Tropical Serenade.

Here comes the bride… or at least her dress and cake. It can all be found in The Haunted Mansion.

There’s plenty of cargo from the Jungle Cruise… and do I spy a fez from the Adventurers Club? Kungaloosh!

Speaking of the Adventurers Club, another display offers items to remind guests of the fun of Pleasure Island. You can find legs to represent Mannequins, a surfboard and umbrella for Rock ‘n’ Roll Beach Club, and a disco ball for 8TRAX. And with that, our tour through history has come to an end, but you can see it all again in the video below!