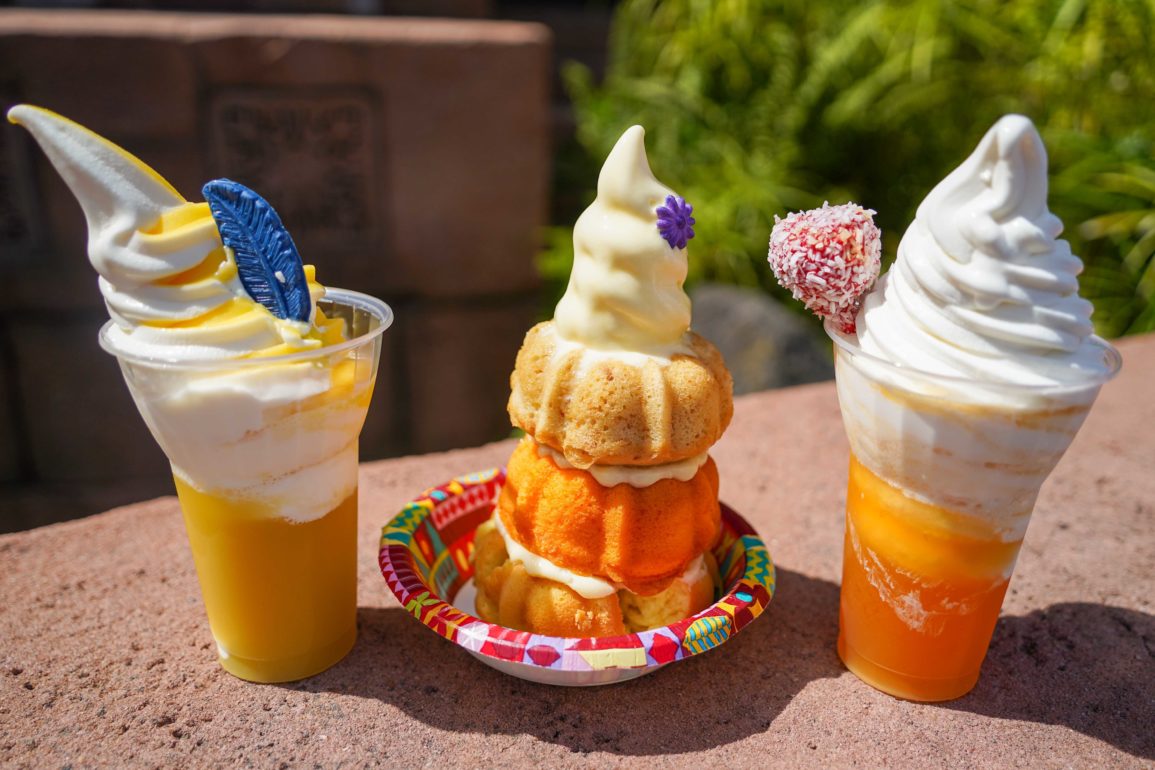 Aloha Isle is right next to Enchanted Tiki Room in Adventureland.

This one is definitely the best of the three options. The mango and vanilla soft serve are a delicious pairing. The mango flavor came through with just the right strength so as not to be overpowering, but not to be drowned by the vanilla either.

It also meshed with the pineapple juice, so all three ingredients delivered a deliciously fruity combination.

The feather was a nice decoration but didn’t add anything to the flavor profile. It, at least, tasted like good milk chocolate, unlike most other chocolate accents on Walt Disney World treats.

This is a unique dessert and a bit of a strange offering for Aloha Isle. The three bundt cakes are held together with a vanilla cream icing.

Though all three were supposed to be filled with DOLE Whip, only the top cake seemed to have it. This was the vanilla-flavored cake, which was our least favorite of the three layers.

It offered little in the way of flavor and had a somewhat crunchy texture in spots.

The orange cake was our favorite. It had a subtle but noticeable orange flavor that paired nicely with the pineapple DOLE Whip. The pineapple cake on the bottom was good, though it tasted more like pound cake and the pineapple taste wasn’t noticeable.

All three of the cakes were heavier and denser experience than we expected. It wasn’t displeasing, but also isn’t refreshing, which is what Aloha Isle Refreshments is known for.

This is a fairly simple float, mostly consisting of coconut soft serve and pineapple juice. In the 50th anniversary list on My Disney Experience, it’s actually listed as POG juice, but the Aloha Isle menu just states pineapple juice.

We found the coconut overpowered most notes of pineapple, despite the tartness one might expect. While this didn’t detract from the overall flavor, that flavor mostly consisted of coconut.

The cake pop was nothing special. It didn’t add much in the way of taste, but you can get a nice texture if you dunk it in the float.

This float is for coconut lovers who won’t mind a slight variation on that main ingredient.