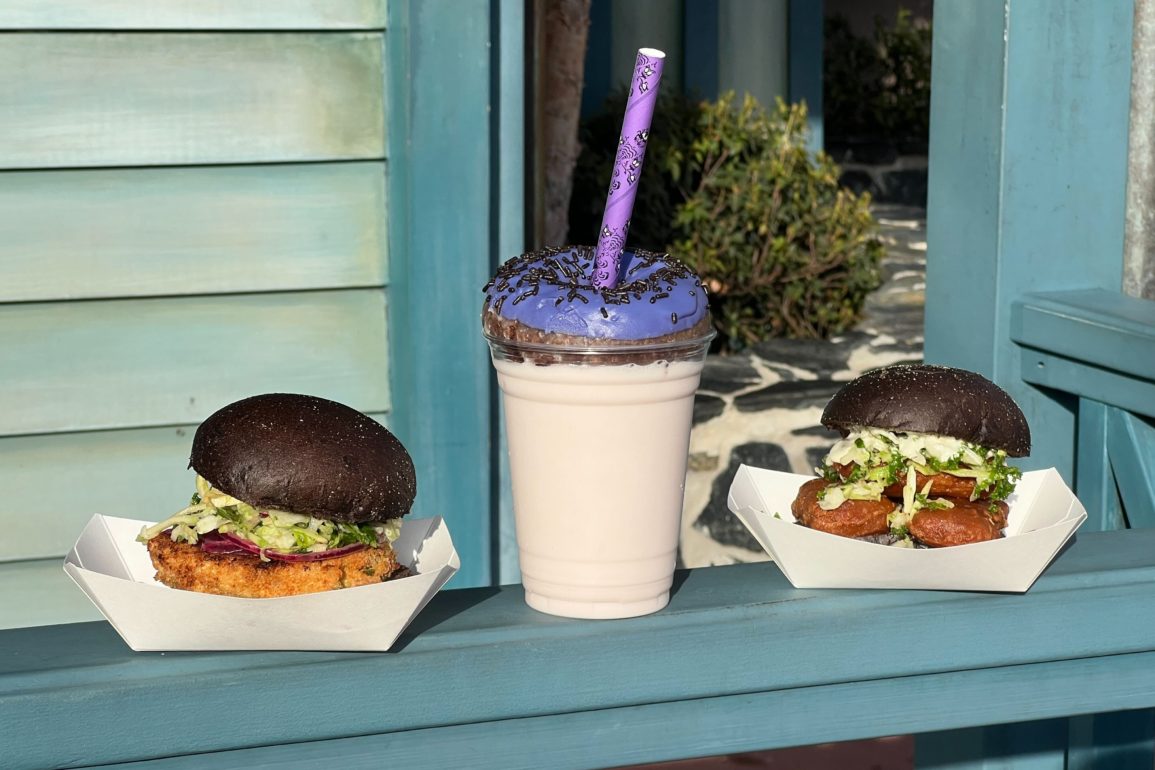 We’ve been reviewing a lot of sugary 50th anniversary treats at Walt Disney World today, but if you’re in the mood for an actual meal, Columbia Harbor House in Magic Kingdom has some options inspired by The Haunted Mansion.

The new items may not stand out on the menu, but they are the Sea Captain Catch, The Doom Burger, Spoon for One More, Happy Haunts Milkshake, and Hail to the Leaf! We picked up everything except the latter salad to try for dinner.

This is a must. The blackberry milkshake isn’t tart; it’s sweet, but just enough. It’s not too artificial. The glazed chocolate donut on top had a nice soft and flaky texture. The star is the themed paper straw, which looks like the Haunted Mansion wallpaper. It’s a wonderful touch to an already delicious milkshake. You should make it a point to get this.

We’ve had a lot of fake crab cake at Walt Disney World in the last few years, and it’s usually great, but this one isn’t.

The plant-based crab cake is salty and doesn’t replicate the real thing at all. Plus, the bread — which is the same in the next two dishes — was horrendous. It’s supposed to be pumpernickel, but it’s a bad take on it.

This dish is named for the famous Haunted Mansion character who was originally supposed to be the central character of the attraction.

This is just a fried fish sandwich. It’s the same fried fish as always at Columbia Harbor House, and it’s good.

Though advertised as one giant piece of fish, ours had three pieces. We got it with the standard skinny fries.

The soup was good, with a little bit of a peppery kick.

It had a nice, thick consistency. Again, we weren’t fans of the bread.