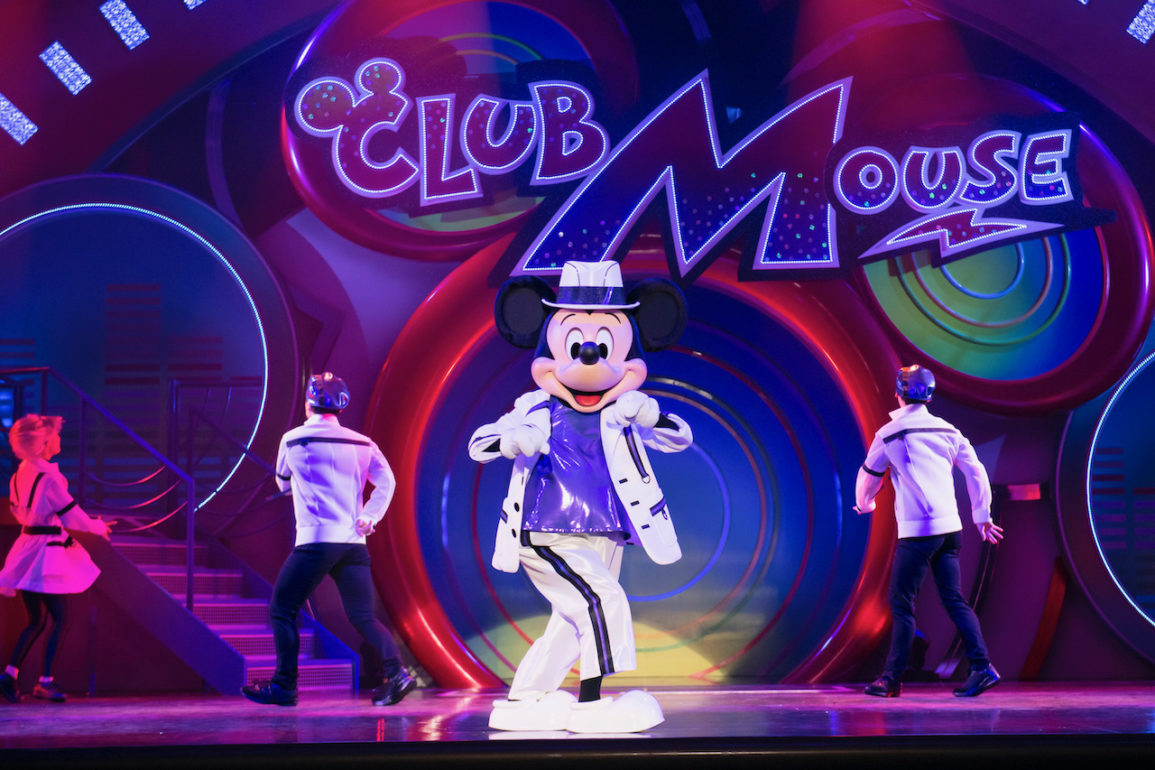 Something that most Disney Parks have lost sight of over the years is how to create that perfect level of cheesy fun in entertainment, opting for more grand and regal choices over time. Sure, some still exist like Beauty and the Beast: Live on Stage at Disney’s Hollywood Studios, but they’re a dying breed. That is, except at Tokyo Disney Resort. In fact, the Oriental Land Company loves this brand of kitschy, unbridled fun so much and it’s exemplified in many seasonal events and even some long-term shows.

The latest addition to the resort’s repertoire, “Club Mouse Beat,” hits all the right notes to make it the best stage show in all of Tokyo Disneyland! You can watch our show video below, and keep on reading for a full synopsis (including photos) and a review.

The premise of the show is pretty simple — Mickey and his pals have opened a new dance club, the titular Club Mouse, and a number of Disney characters will come out and show off their dance moves from Disney films both classic and overlooked, as well as a few old Tokyo Disney Resort shows.

The show opens with the “Club Mouse” theme song, which is a poppy, catchy, high-energy song that sets the tone for the whole show and gets the audience pumped up.

The first act is, amazingly enough, Goofy and Max dancing to “I 2 I” from “A Goofy Movie.” It is the song the father and son sing and dance to at the film’s climactic concert. That’s right, they really dug into the archives for this show, and it pays off!

Next up is Donald, comically misreading the mood as always. He tries to conduct the first few bars of Beethoven’s Fifth (wearing a wig that strongly resembles the unmistakable composer).

So out come Chip ‘n’ Dale with a good old-fashioned Mambo, a nod to the former “Minnie, Oh! Minnie” which played at Tokyo Disneyland from 2004 through 2018.

If you were ever around during winter from 2017-2019, you might remember the old “Lightning McQueen Victory Lap” that took place in American Waterfront for Pixar Playtime… well they brought it back with a chorus of “Real Gone” from “Cars” for this show, keeping the energy high. There’s even some nostalgic chanting of “Lightning, Lightning, Lightning! McQueen!”

The next nod to TDR is an oldie but goodie. Donald bursts out in an Elvis-like outfit with dancers and brings on a round of 1999’s “Donald’s Super Duck Parade.”

Classic villains like the Big Bad Wolf, the Evil Queen, and Captain Hook (when I say classic, I mean classic) come out to take over Club Mouse, now called “Club Villains” with an incredible banner featuring the Magic Mirror and the original Club Mouse sign in flames. They first dance to “Let’s Get Wicked,” which comes from a Halloween show at Hong Kong Disneyland.

Then comes a round of “Only Tonight”, the finale song from the insanely beloved “Mysterious Masquerade,” the Halloween show at Tokyo DisneySea from 2009-2010.

After the Disney friends regain control of Club Mouse, the next act is Minnie and Daisy singing their number from “Natsu Matsuri: Soryo Kobu,” the 2013 summer event at Tokyo Disneyland.

The curtain then falls for a brief interlude of “Try Everything” from “Zootopia” with Nick and Judy, definitely keeping the energy going.

The show definitely wouldn’t be a dance show without one very famous (or infamous) parks song. That’s right, “It’s a Good Time” makes its Tokyo debut in this show, and this may be the perfect use for this song.

Finally, a short reprise of “Club Mouse” closes out the show, complete with the confetti cannons we expect from the end of a Tokyo Disney Resort stage show.

I sat down for this show not imagining how much I would enjoy it. The descriptions I wrote don’t do it justice, it’s such a fun, upbeat, high-energy show that keeps the audience engaged from start to finish. And with only about half of Tokyo Disney Resort’s permanent stage shows back on the roster (maybe less, not sure if “Big Band Beat: A Special Treat” really counts), this show is your best bet for a fun and satisfying time from start to finish.

“Mickey’s Magical Music World” at the nearby Fantasyland Forest Theatre is regal, grand, and everything you’d expect out of a Disney show from the overseas parks, but “Club Mouse Beat” is quintessentially TDR, a show you’d only see here, that only works here. And that’s part of its charm, the fact that the Oriental Land Company’s entertainment department isn’t afraid of not taking itself too seriously. It’s (excuse the pun) a good time and doesn’t necessarily need to have a real plot or a high budget to clear that bar of great entertainment.

From obscure songs like “I 2 I” and “Let’s Get Wicked” to the many, many TDR callbacks, this show is a home run from start to finish, and one I hope sticks around longer than it probably will. This is likely destined to be an intermediary as entertainment slowly returns to normal at Tokyo Disney Resort, which is a real shame. I would keep this show around over the return of “Let’s Party Gras!” over in Adventureland, at least for a couple of years. But if you asked me which show I would like better, the grand, multi-million dollar production that spent three years in development and construction, or the stopgap show that was quickly added to the roster on a budget, it should not surprise anyone that I’d answer the latter given OLC’s track record with entertainment.

“Song of Mirage” is the best show at the resort and it was quickly thrown together due to bad reception of the high-budget “Out of Shadowland.” “Big Band Beat” was designed to be temporary when it debuted in 2006 and has now stuck around for 15 years. The list goes on.

If you get lucky enough to win a seat to “Club Mouse Beat” (it took us four months), you won’t regret taking time out of your day, especially if you appreciate the days when Disney wasn’t afraid to be more fun than serious with entertainment. Five stars from us, we only wish it would stick around longer than it probably will.