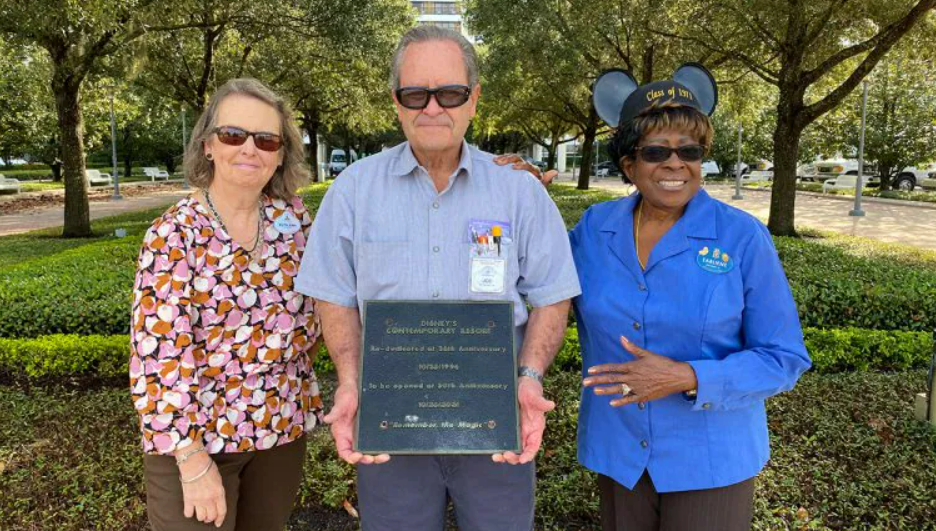 Twenty-five years ago, cast members at Disney’s Contemporary Resort carefully packed a time capsule with documents, nametags, and other treasures to celebrate the anniversary of the Resort’s dedication. The engineering services team sealed and buried it in the ground in front of the flag poles at the Resort, marking the location with a plaque that read: “To be opened at 50th Anniversary, 10/25/2021. ‘Remember the Magic.’”

So, on Oct. 25, 2021, a group of very special cast members were invited to be among the first to see what was inside. You might recognize a few of them; Earliene, Ruth Ann and Joe all celebrate their 50-year service anniversaries during The World’s Most Magical Celebration, the 50th anniversary of Walt Disney World.

Among the treasures inside the time capsule was a limited-edition Disney’s Contemporary Resort 25th anniversary commemorative coin, the first 1,000 of which were given to the dedicated cast members who worked there at the time. Earliene recalled receiving her coin, saying that she proudly added it to the collection of memorabilia she’s amassed since she started working at Walt Disney World.

Other items included a 1996 edition of an employee newspaper, featuring a 16-month countdown to the grand opening of Disney’s Animal Kingdom Theme Park, which opened in 1998; an anniversary poster of Cinderella Castle decked out in its birthday cake décor; and a bowtie worn by Charles, the general manager of Disney’s Contemporary Resort at the time. Joe said he remembers that item being added in, as bowties were Charles’ signature accessory.

This moment was especially poignant for Joe, who celebrated both his 50-year service anniversary and his retirement on this day. He loves showing cast members his original ID badge, which denotes his start date of Oct. 25, 1971, the day Roy O. Disney officially dedicated the Walt Disney World Resort.

Watch the Cast Members open the time capsule in the video below.

The contents of the time capsule have been archived and kept safe so that, as Walt Disney World continues to celebrate milestone anniversaries, cast members can look back at their history and share their stories for years to come.

Previous
PHOTOS: Greeter Structure Added to Entrance of Guardians of the Galaxy: Cosmic Rewind at EPCOT

Next
BREAKING: Tom Williams Retiring, Mark Woodbury to Become CEO of Universal Parks and Resorts in 2022