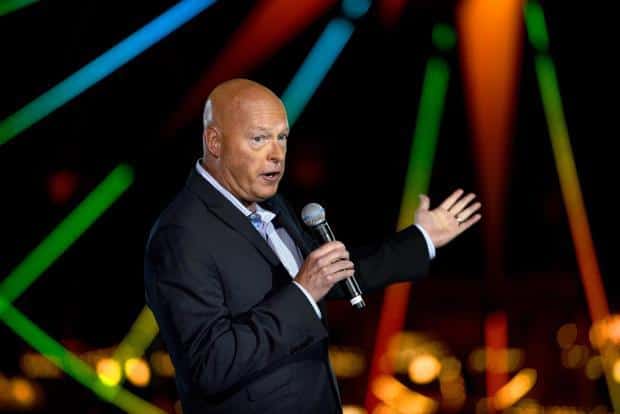 Bob Chapek wants the world to see him as more than a bean counter as he approaches the start of his second full year as Disney CEO. “He’s had a rough year and a half,” producer Alan Horn told Christopher Grimes and Anna Nicolaou of the Financial Times.

That “rough year and a half” began with mass layoffs of around 28,000 Cast Members during the start of the pandemic and executive wage cuts (which were restored while most Cast Members continued to be stuck in furlough), and continued with a lawsuit from one of Disney’s biggest stars, the replacement of the free FastPass program with a new paid service, and a petition calling for his removal from the company with over 80,000 signatures.

“I’ve seen creativity in this company through every lens possible,” Chapek said in an interview with Grimes and Nicolaou, “It ties us to our ultimate constituent, which is the consumer.”

Chapek chafes at the appraisal that he is “an outsider, a number-cruncher, a cost-cutter” in comparison with his predecessors Bob Iger and Michael Eisner, who were viewed as “creative people at heart.”

Compared to Iger, who rose to success at Disney through the film industry, Chapek was seen as an “unknown” in the industry. His rise to CEO “worries some actors, directors, and agents in Hollywood.” His focus on streaming services doesn’t alleviate those worries.

Disney fans may remember Chapek as the champion of the Disney Vault, a fictitious safe which housed classic Disney films away from the public. Movies were released for a limited time before going “back in the vault,” creating false scarcity. Now, Chapek has moved on from the Vault and become the champion of Disney+.

Chapek’s protest against his bean counter reputation comes after the latest quarterly earnings call, in which he made public his desire to have Disney enter the sports betting business.

Chapek has been restructuring the company and its priorities. In addition to former BP executive Geoff Morrell as Chief Communications Officer and former Procter & Gamble executive Susan Arnold as Chairman of the Board, Financial Times reports that Chapek made major changes to the production and distribution teams which were highly critiqued by former Disney executives.

One former executive claims Disney under Chapek “became a club where the old members reasserted themselves. The only qualification they had was they had to have been around for 30 years at Disney and nowhere else.”

Iger reportedly expressed concern to other executives. “He said the company was changing and he was concerned by the lack of innovation, the lack of strategy,” says one senior executive.

With Iger departing at the end of this year, Chapek will be on his own for the first time since he took the position last spring.