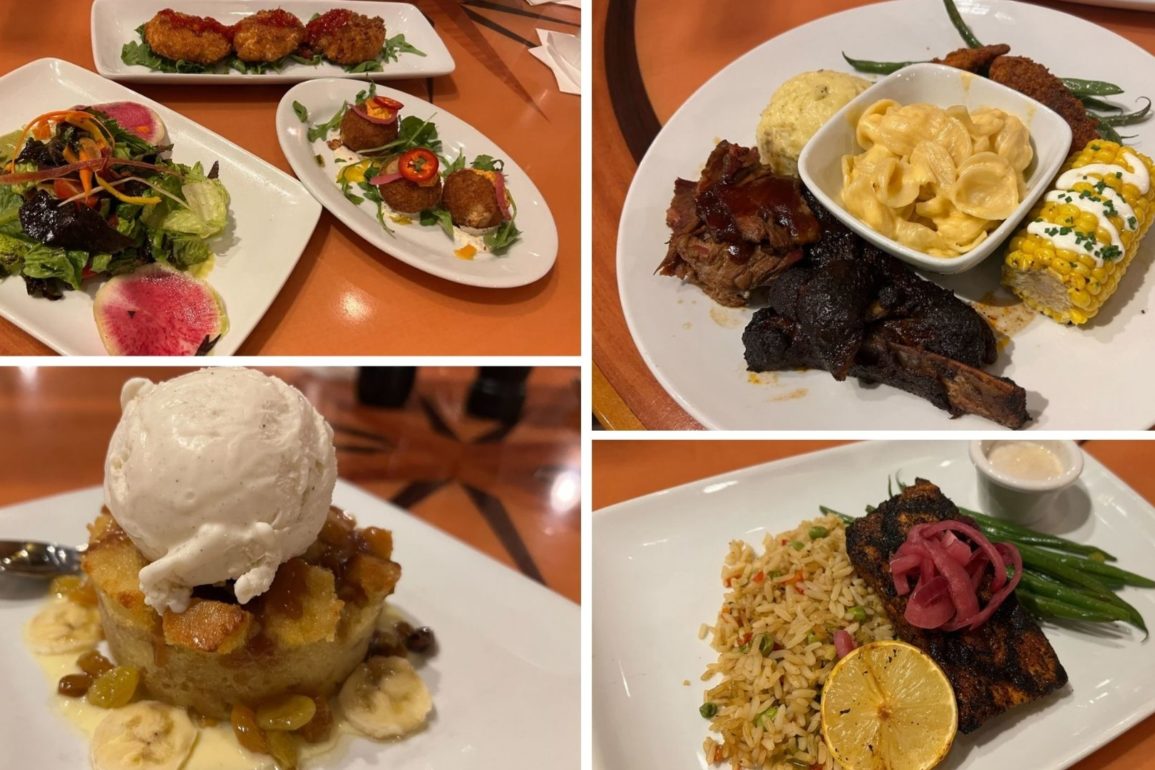 Boatwright’s Dining Hall has reopened at Disney’s Port Orleans Resort – Riverside and we were there for the re-opening dinner.

The cornbread now comes in a loaf, which had a nice and slightly crispy exterior. It’s a great contrast to the moist inside. It’s not dry and crumbles just enough. The butter is soft and easy to spread, with the honey adding a pleasant sweetness.

This is really enjoyable and one of our favorite complimentary breads at Walt Disney World.

The salad had a nice fresh bed of greens. The ribbons of rainbow carrots and watermelon radish add a fun pop of color to the plate.

The avocado-tarragon dressing is creamy, though fairly mild. While this is nothing to write home about, it makes for a satisfactory appetizer.

The outside of these are crispy and well-breaded but lack seasoning. The interior dirty rice mixture is moist and keeps the consistency well.

It’s nothing special but has a decent kick of spice. Unfortunately, it’s lost due to the lack of overall seasoning with the ball.

These are overall pretty good. They’re crispy on the outside and the cheese was melted just enough.

They were flavorful and the pepper jelly was sweet, although lacking some kick. Otherwise, we enjoyed these.

The meal is a standard go-to. For a little bit more money, you get a sampling of a chunk of the menu and have the ability to ask for seconds of your favorite parts.

The mac and cheese was solid. Made with real cheddar. (Not processed cheese).

The hot chicken was well-cooked throughout with a hint of spiciness but the breading was very salty. If you’re looking for a real crispy fried chicken, this isn’t it.

The brisket and ribs were both a bit overcooked. The brisket came with the addition of a sweet barbecue sauce, which was a nice contrast to the hot chicken.

The green beans and corn were boat standard. The corn on the cob was your typical corn on the cob you would find anywhere and the green beans, not having any major specialty flavor themselves, tasted closest to the hot chicken as they were placed underneath the chicken when plated.

Overall, if you’re hungry or would like to sample a few smaller portions of the menu for a possible return visit, this should be considered.

A Boatwright’s staple for many years, it has shrunk in size as time has progressed, but is still of a good quality. It’s a bit spicy, so be forewarned, but that is to be expected from a classic New Orleans dish.

Everything was well-cooked and mixed nicely together in a perfectly seasoned mix. We highly recommend this.

Hot chicken – This is definitely spicy and extremely salty. The chicken was dry but the crunch of the crust was nice. The saltiness was overwhelming to the point of being inedible after a few bites.

Collard greens – These were a little too salty and “spicy”, as in it tasted like a lot of powdered spice may have been used here. Otherwise, they were cooked fine.

Baked beans – The beans tasted like they could have been cooked a little bit longer but they were not runny, which I prefer to watery baked beans. They were slightly sweet with a similar spice profile to the greens.

Picked carrots and pickles – These were sweet and a good break from all the spice but again, the salt profile is evident.

The salmon was delicious and fall-apart soft. It had the perfect amount of seasoning. The brown butter beurre blanc was a creamy addition, making the melt-in-your-mouth sensation even more apparent.

The seasonal vegetables were string beans, which added a great crunch to the dish, though they were a bit under seasoned. The dirty rice was fairly plain.

We would highly recommend this dish overall based on the fantastic quality of the salmon.

We found the cream sauce to just be way too dense and rich for the dish, drowning the flavors of the shrimp and sausage.

A trio of Southern-inspired sorbets

The trio was raspberry, lemon, and sweet tea. Individually, they are wonderful, but combining them floods your senses with the sweet flavors of the south.

The raspberry had a balance of sweet and tangy. The lemon was sour but not overpoweringly so. The sweet tea was exactly as you would expect, like drinking an ice-cold glass of sweet tea. It’s one of the best sorbet trios we’ve tasted in a long time.

Seemingly every table service restaurant is introducing a new bread pudding dessert since the start of the pandemic, likely because it is a cheap and relatively easy dish to make. That being said, several versions of the treat are among the most beloved meal-enders in all of Walt Disney World. This is a solid entry, but likely to be lost in the shuffle.

The bread pudding is perfectly prepared and sweetened well with the accompaniments. It’s certainly good, it’s just not going to leave you as satisfied as the ‘Ohana classic. I was excited at the prospect of bourbon-smoked golden raisins, but they didn’t taste out-of-the-ordinary.

Boatwright’s is one of those consistent, often forgotten table service restaurants hidden at a Disney resort hotel. While it is a bit off the beaten path if you aren’t staying at Riverside, I think it is worth the trip if you are interested in these Louisiana-style dishes.