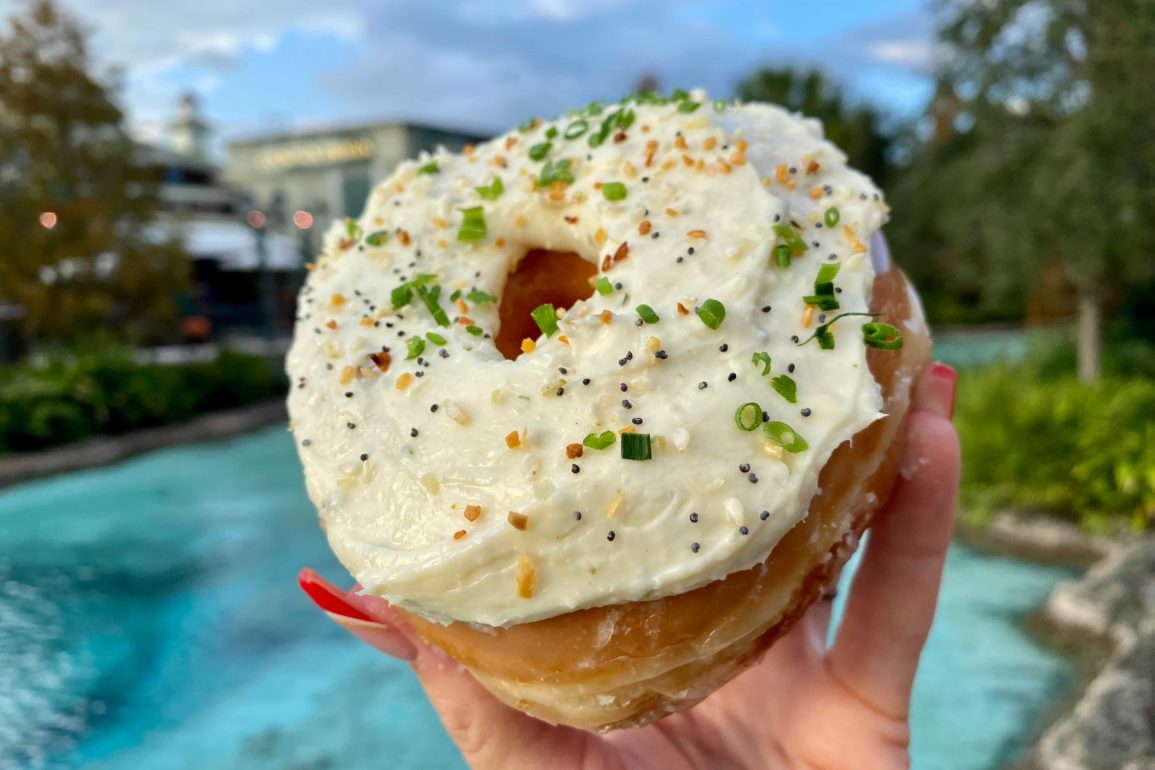 Donuts are popular. Bagels are popular. But could they ever survive a mashup of the two? Over at Everglazed Donuts & Cold Brew in Disney Springs, they’ve made an attempt to find out.

The donut shop has debuted the Everything Donut, a collision of sweet and savory.

This offering features their classic glazed donut topped with a buttercream frosting made with cream cheese and Boursin chive cheese, and sprinkled with everything bagel seasoning and chives.

We didn’t see any signage for the donut when we visited, but we were able to ask for it at the counter.

At least it takes a pretty picture.

The donut is topped with a generous amount of frosting and seasoning, so there was no avoiding this collision of flavors.

It goes without saying that Everglazed’s donuts are always well-made. We had no issue with the glazed donut itself, as it tasted phenomenal. However, the toppings proved to be a different story.

Though it wasn’t listed as part of the ingredients, the smell of green onions is immediate as soon as we opened the box. While it’s a good idea in theory, and the saltiness of the everything seasoning with the strength of the green onions balances out the sweetness of the donut, these toppings are best left to bagels.

We don’t think it helped that it didn’t seem like the cheese was all mixed together as well as it could’ve been, as we still had large pieces of cream cheese or Boursin cheese in the frosting.

It’s such an odd mix between the overly sweet donut and raw powdery texture of the everything bagel seasoning mixed with pure green onion. If you’re feeling brave, go for it but it was too weird for us.

We give it an A for effort, but ultimately, we suggest you pass on it, especially if you don’t want to smell like green onions for the rest of the day. That smell definitely lingers.

For more tradition offerings from Everglazed, be sure to check out our recent review of all of their holiday specialty donuts!