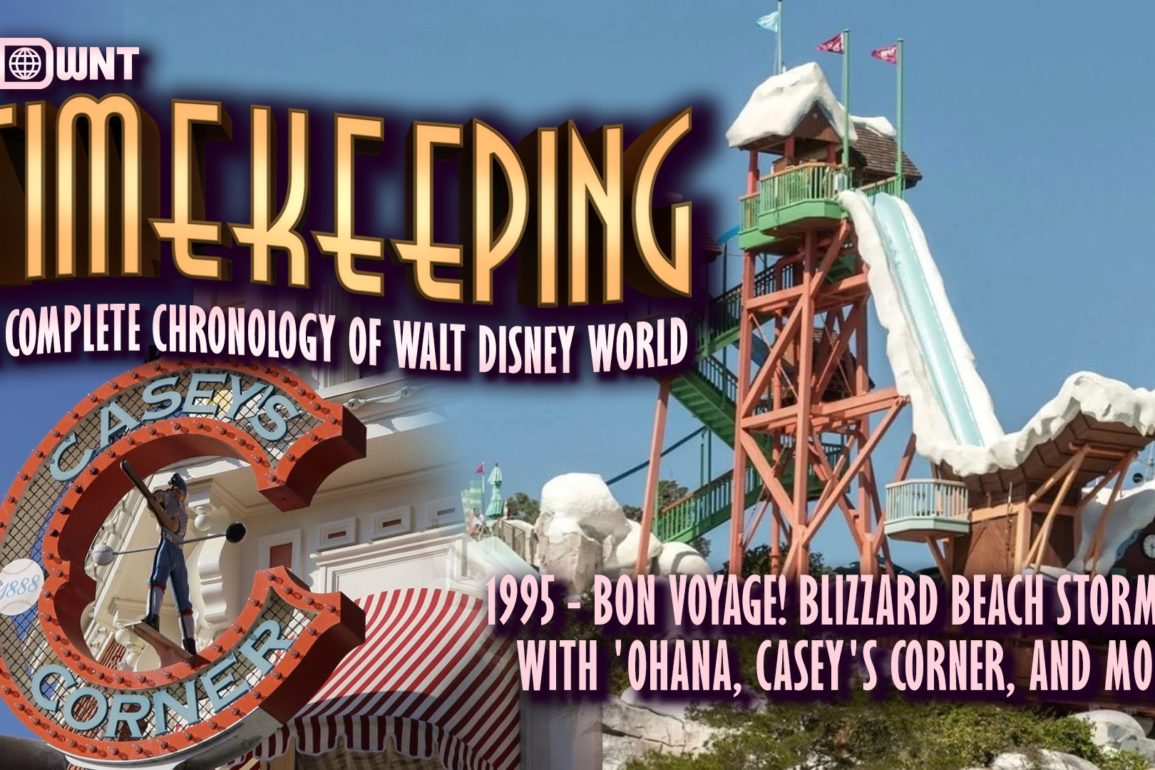 1995 saw the Walt Disney Company still in turmoil after the tumultuous storm of events that befell senior management the year before. Michael Ovitz joined the company to fill the late Frank Wells’ spot. A fictional storm would usher in a new water park, while changes to the theme parks themselves were somewhat minor. 1995 would also see the closure of several fan-favorite restaurants and the birth of new ones.

Main Street saw significant changes. The House of Magic, Penny Arcade, and the Main Street Book Store closed on March 19 to become the Main Street Athletic Club, which opened on June 28. The Refreshment Corner became Casey’s Corner on May 27. Over in Frontierland, The Diamond Horseshoe Jamboree was replaced by Diamond Horseshoe Saloon Revue & Medicine Show. This new hour-long show was hosted by Dr. Bill, and featured an array of musical, dance, and variety acts. The restaurant no longer required reservations and shifted to a quick service location.

After a short closure of Space Mountain in January, the ride reopened with the exit ramp scenes rethemed to the new sponsor, FedEx. RYCA 1 was overlaid to show FedEx shipping across the galaxy instead of just a general space colony. The exit now also dumped guests into Tomorrowland Light & Power Company, which opened February 1. This was to be the Magic Kingdom’s new arcade. Across Tomorrowland, the Transportorium officially took the name of The Timekeeper.

June 20 saw the relaunch of The ExtraTERRORestrial Alien Encounter after it closed for re-imagining on January 12. Despite stories of Michael Eisner demanding it be made scarier, this new version was meant to have a more consistent tone.

The pre-show changed Phil Hartman’s TOM 2000 into Tim Curry’s Simulated Intelligence Robotics or S.I.R. This rewrite changed the robotic host from a blundering goofball to a foreboding presence, more in line with the tone of the main show. S.I.R. finds pleasure in torturing the adorable test subject, Skippy, a caterpillar-like alien. New scenes were added to the main show, replacing a guest being eaten with a maintenance worker on the catwalk instead. The show also now ended after the alien was trapped and destroyed, rather than with Chairman Clech beaming in.

The afternoon parade during 1995 was Mickey Mania, which actually began June 1, 1994 and would run through September 1996. The soundtrack had a 90’s hip-hop feel, mixing in audio clips from the Mickey Mouse Club and other Disney classics.

The parade was led by in-line skaters wearing a mickey leopard print. They were followed by the title float, consisting of a group of ramps and slides manned by Donald, Pluto, and Roger Rabbit. Next came stilt walkers leading a tri-circle frame float with an inflatable Mickey in a Superman flying pose hanging in the large center circle. That was followed by a series of performers in what can only be described as Mickey punching bag costumes and others riding space hoppers. Then came an industrial-looking float covered in Mickey shapes, with a giant inflatable Mickey head that was manned by Goofy and his son Max and another tri-circle frame with a gumball machine-like dome in the center. Peter Pan, Pinocchio, and “Alice in Wonderland” characters would then ride by on tricycles. Next came “Winnie the Pooh” characters on a float covered in plush Mickey toys, with another of the frames displaying the Disney channel logo. Minnie Mouse and a group of dancers served as the next unit, appearing to be filming a music video. After that, performers dressed as the bands and faces of Mickey watches came by. They were followed by a clockwork float with an array of characters that had to do with watches, such as Jiminy Cricket, Lumiere, and Tick-Tock the crocodile. Next came a series of dancers that answered the question what MC Hammer would look like Disneybounding as Mickey with giant inflatable Mickey’s gloves and shoes. The final unit featured Mickey himself atop abstract shapes.

In the fall was the first Epcot International Food and Wine Festival, which appears to have lasted 30 days and had 25 booths.

Innoventions saw exhibits change in and out. Imagineer Labs and Lego closed at some point, and the Magic House tour shut down in the spring. Silicon Graphics opened an exhibit, along with exhibits by Oracle, Family PC, and Motorola’s Communications Dream Forum, which all opened in the fall. The Mr. Midi Exhibit only ran through the summer months.

Over at The Land, Symbiosis closed right after the new year and reopened January 21 as Circle of Life: An Environmental Fable.

The new version of the film, which recycled much of the original footage, now focused on Timon and Pumba trying to open a resort, and Simba describing the environmental damage that projects like that could do. Aside from Simba, who was voiced by Cam Clarke, all of the original voice actors returned.

Over at Disney-MGM Studios, The Spirit of Pocahontas opened in the Backlot Theater on June 23.

The show opened with “Steady as the Beating Drum,” with performers dressed as the Powhatans dancing with harvested crops and other props. The show’s narrator then addressed the audience, welcoming them to the story of Pocahontas. This was followed by Just Around the Riverbend. Pocahontas then met a large puppet Grandmother Willow. The narrator said the English have arrived, and the tribe sang with stick figures dressed as the Europeans. A real John Smith appeared and sang his portion of “Mine, Mine, Mine.” The two leads then met, and Pocahontas introduced Smith to Grandmother Willow. Pocahontas sang “Colors of the Wind.” The narrator then explained the simplified conflict between the English and the Powhatans, and the stick figure English sang “Savages.” The battle was presented like the Powhatans putting on a play, until Pocahontas saved John Smith, and the show ended with a reprise of “Colors of the Wind.”

Pizza Planet Arcade took over the space housing the previous arcade on December 15.

The Teenage Mutant Ninja Turtles would end their run in the park on May 31, and Ace Ventura: Pet Detective – Live in Action began a show on New York Street November 10.

The show featured Ace being introduced before repelling down from the roofs to address the audience. He put on a small show, replete with overacting before leaving via swing. He climbed the buildings’ fire escapes and ziplined across the street to rescue a spider crawling around the roof line. The spider attacked Ace. After he subdued it, he seemed to fall backwards off the building. He then appeared for meet and greets. The show took place on one of the side streets and included a small set of Ace’s office.

The green army men kicked off the parade on a float imitating the Iwo Jima flag raising. The next float featured large moving reproductions of Potatohead and Hamm with performers dressed as Monkeys in a Barrel. After that came Buzz standing atop his rocket ship box on a float covered in aliens and surrounded by dancers in costumes recycled from Splashtacular. Next came more green army men driving a hot wheels car (and definitely not the van from Teenage Mutant Ninja Turtles repainted) and carrying the walkie talkie. The finale featured Rex and Woody on a float with a variety of the secondary toys.

1995 would also be the debut of the The Osborne Family Spectacle of Lights. This holiday display was acquired by Disney from Jennings Osborne after his personal Christmas light display prompted several lawsuits. This instant hit was originally presented along Residential Street on the Backstage Studio Tour, prompting the ride to close in the evenings so that guests could wander the street on foot.

Walt Disney World opened its third water park on April 1. Themed as a failed attempt at a Florida ski resort, the park was centered around Mount Gushmore, the mountain containing most of the park’s slides. The main attraction is Summit Plummet, a 120-foot tall free-fall slide that looks like a ski jump. To one side of the slope, you would find Teamboat Springs, the family raft ride, and the two children’s areas: Tike’s Peak for small children and the Ski Patrol Training Camp for slightly older kids. On the other side, there is Slush Gusher a 90-foot body slide; Toboggan Racers, the toboggan style mat slides; and the Snow Stormers, the more winding mat slides. Runoff Rapids, three tube slides, are toward the back of the mountain.

Along the base of the mountain, guests could find the Chair Lift used to get to the slides at the very peak; Melt Away Bay, the wave pool; and Cross Country Creek, the lazy river. Guests had three food options. Avalunch served hotdogs and ice cream, while the Warming Hut served a vastly different menu of Italian sausages and ice cream. For a wider variety, including pizza, sandwiches, and pasta, there was the Lottawatta Lodge. Merchandise was sold at the Beach Haus, while lockers and towels could be rented at Snowless Joes. The park featured a mascot character that played heavily into the theme and merchandise of the time: Ice Gator.

Between Disney’s Grand Floridian Resort and Disney’s Polynesian Village Resort, the Wedding Pavilion opened on July 15. The first actual wedding occurred as part of a television special, “Weddings of a Lifetime,” on June 18. The venue could hold 250 guests and was designed to feature a view of Cinderella Castle as a backdrop to the ceremonies. Attached to the pavilion is Franck’s, the planning area that was named after Martin Short’s wedding planner character from 1991’s “Father of the Bride.”

Over at the Polynesian, ‘Ohana replaced Papeete Bay Verandah on April 12. Along with that, the children’s seating area and mini-theater were added to the lobby and the Great Ceremonial House received a new roof. The menu for the luau was also updated.

The California Grill opened atop Disney’s Contemporary Resort on May 15, replacing the Top of the World after an extended closure. Chef Mickey’s at the Village Marketplace closed on September 30 and reopened in the Contemporary Café space on December 22. These restaurants joined the Concourse Steakhouse which had opened on August 10, 1994.

Over at Pleasure Island, NSYNC filmed one of their first demos at the Rock N Roll Beach Club. The Empress Lilly closed its doors on April 22 after 18 years of operation.

1995’s Walt Disney World could be seen as reaching a new height. The resort had eight separate ticketed gates. There were more than a dozen completed hotels to choose from. New shows kept all the parks fresh even when no major attractions were opening. The resorts’ silver anniversary was right around the corner and what Walt Disney World would have planned for that would certainly take the cake.