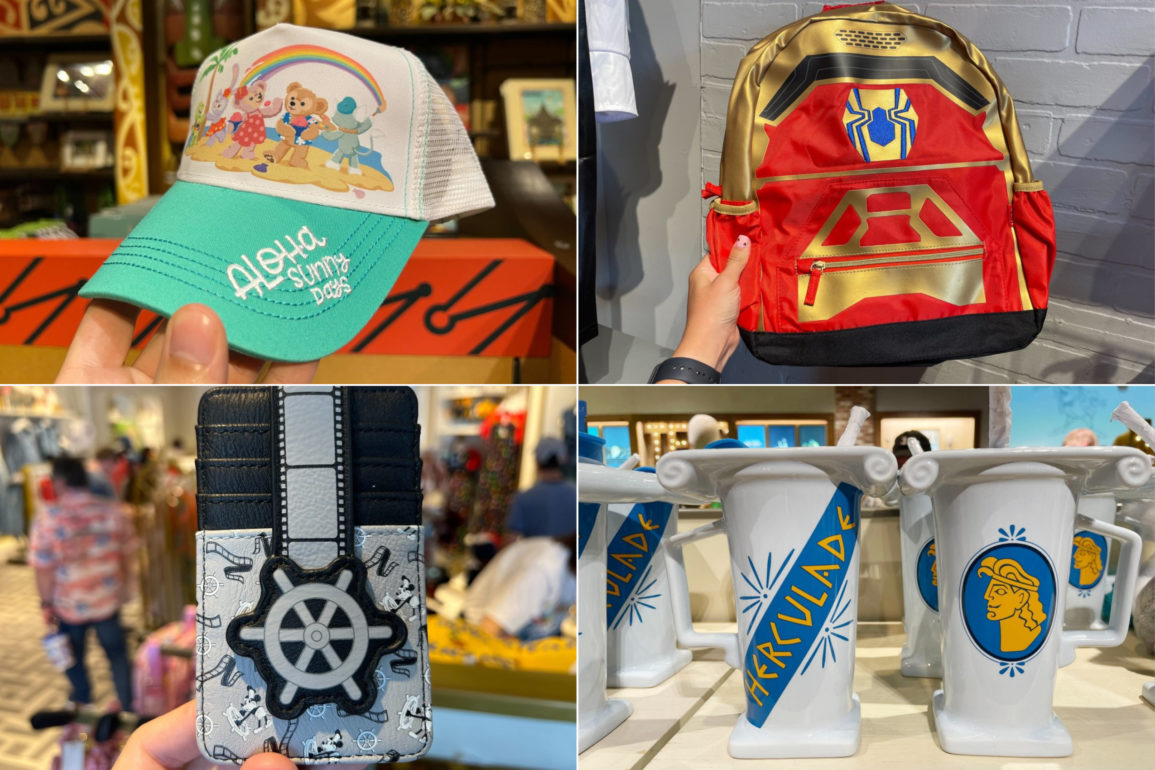 This faux succulent comes in a black pot embossed with arrow shapes and Mickey heads.

We found it in the Emporium at Magic Kingdom.

It goes with houseware items we’ve found in other merchandise roundups.

Perfect for adding that finishing touch on your nuiMOs doll, this backpack is inspired by the actual blue and white polka dot Loungefly backpacks sold at the Disney Parks.

We found both of these at the Emporium in the Magic Kingdom.

Featuring a seafoam green brim and a white front with netting on the back, this hat from Aulani features Duffy, ShellieMay, Gelatoni, StellaLou, and ‘Olu Mel enjoying a day on the beach.

We found this at BouTiki in Disney’s Polynesian Village Resort.

This tote is made of faux leather and is colored in a reflective silver, with Mickey and Minnie kissing pressed on the front.

The back side has no pattern.

The interior is filled with art of snowflakes, sugar plum fairies, mistletoe, and Mickey and Minnie in their winter wear. This may have been destined for the holiday season, but we’re well past that point.

The shirt features a sketch of Mickey with “Oh Boy!” written repeatedly behind him.

Mickey’s name along with the Roman numeral for 1928, his debut year, is patched on the bottom.

The same Mickey and 1928 in Roman numerals is present on this shirt, although it’s printed on reflectively rather than as a patch.

This pass case features a clip with the steamboat’s steering wheel.

The pattern behind is gray with Mickey steering the boat along with the boat’s wheel and film reels.

We found these all at the Majestic Theatre in Disney’s Hollywood Studios.

These socks feaature Scrooge McDuck as well as Huey, Dewey, and Louie. We found these at Sunset Club Couture at Disney’s Hollywood Studios.

Over at Rock Around the Shop at Disney’s Hollywood Studios, we spotted this new hat featuring retro designs of Mickey, Donald, Goofy, and Pluto.

This new baby dress featured pencil designs of Minnie in red on a white background, along with an accompanying bow. We found this at Creations Shop in EPCOT.

At the World of Disney Store in Disney Springs, we spotted this plain and simple Mickey cap with a surprisingly reflective black rim.

We also found this new “Herculade” ceramic mug styled after the drink named for Hercules in the classic film of the same name.

Fans of “The Book of Boba Fett”, which just wrapped on Disney+, can pick up this small backpack themed to the iconic bounty hunter at the World of Disney Store.

At Pin Traders, we found this neat denim patch of a Mickey silhouette lined by flowers.

At DisneyStyle, we found this plain denim pass case with Mickey’s face stamped all over.

And finally at Marvel Super Hero Headquarters, we caught this new Spider-Man backpack with red and gold accents, no doubt inspired by the web-slinger’s look in “Spider-Man: No Way Home”.