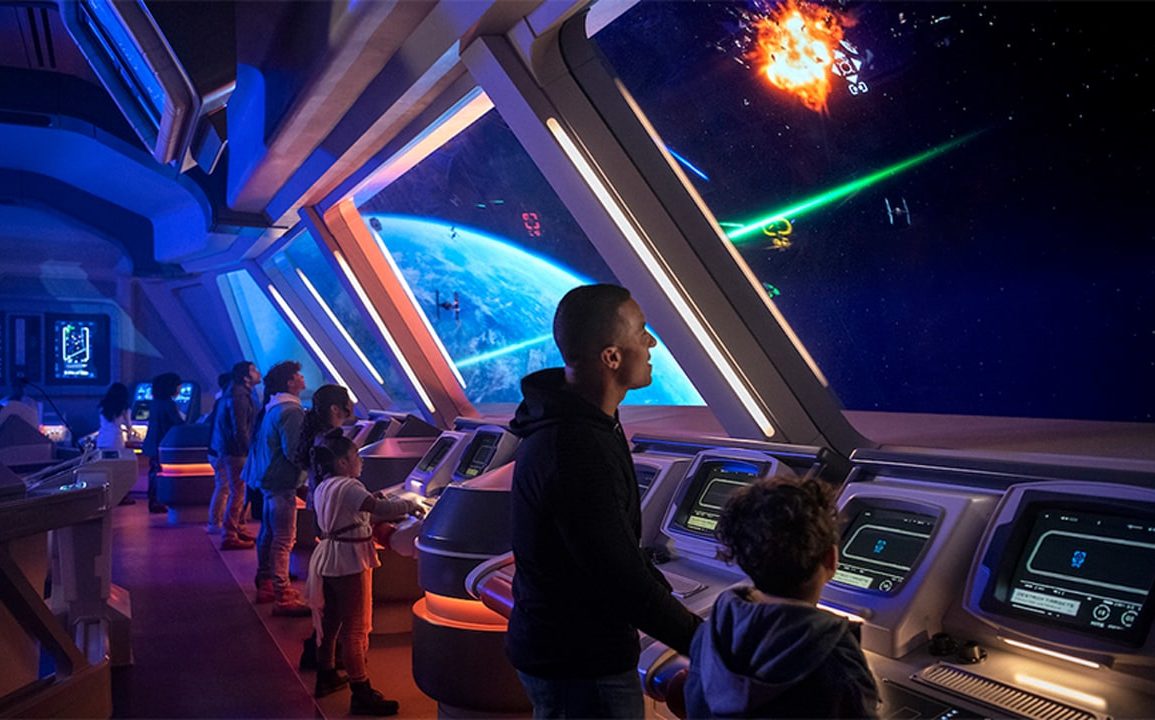 One image of guests doing bridge training was released, with a space battle happening “outside.” We also took screenshots of other scenes from the video.

Guests in the video are mostly shown wearing masks.

Above is our first look at the atrium of Star Wars: Galactic Starcruiser, with a droid greeting guests. The story covers the anniversary cruise of the Halcyon, which has been restored to its original glory and is following its original flight plan to Batuu.

Chewbacca is seen helping a young guest, presumably with some Resistance spy work.

Here is the Crown of Corellia Dining Room, with neon lights in the ceiling.

Here’s a droid visiting guests at a dining table.

This shot and the one below appear to be from the airlock that will connect the Halcyon to the shuttles.

And this brief blue-ish look may be from the shuttle transport itself.

We also saw a few shots of Stormtroopers in red lighting lining up at the atrium railings.

Walt Disney Imagineering developed Star Wars: Galaxy’s Edge and Star Wars: Galactic Starcruiser at the same time, intending for them to complement not only each other, but the broader place in Star Wars history in which they’re set. Collaborating with Lucasfilm, they created the Halcyon starcruiser, our setting for this new two-night immersive adventure that takes us deeper into the tales of that galaxy far, far away. Here to tell you more about the ship and its story are Imagineer Travis Finstein and Matt Martin from Lucasfilm Franchise Content & Strategy.

Finstein and Martin also talk about the “Halcyon Legacy” comic series, which connects to Star Wars: Galactic Starcruiser. We reported on some of the connections previously.

Next
Disney is Already Toning Down Immersion for Star Wars: Galactic Starcruiser by Replacing ‘Databand’ Term with ‘MagicBand’