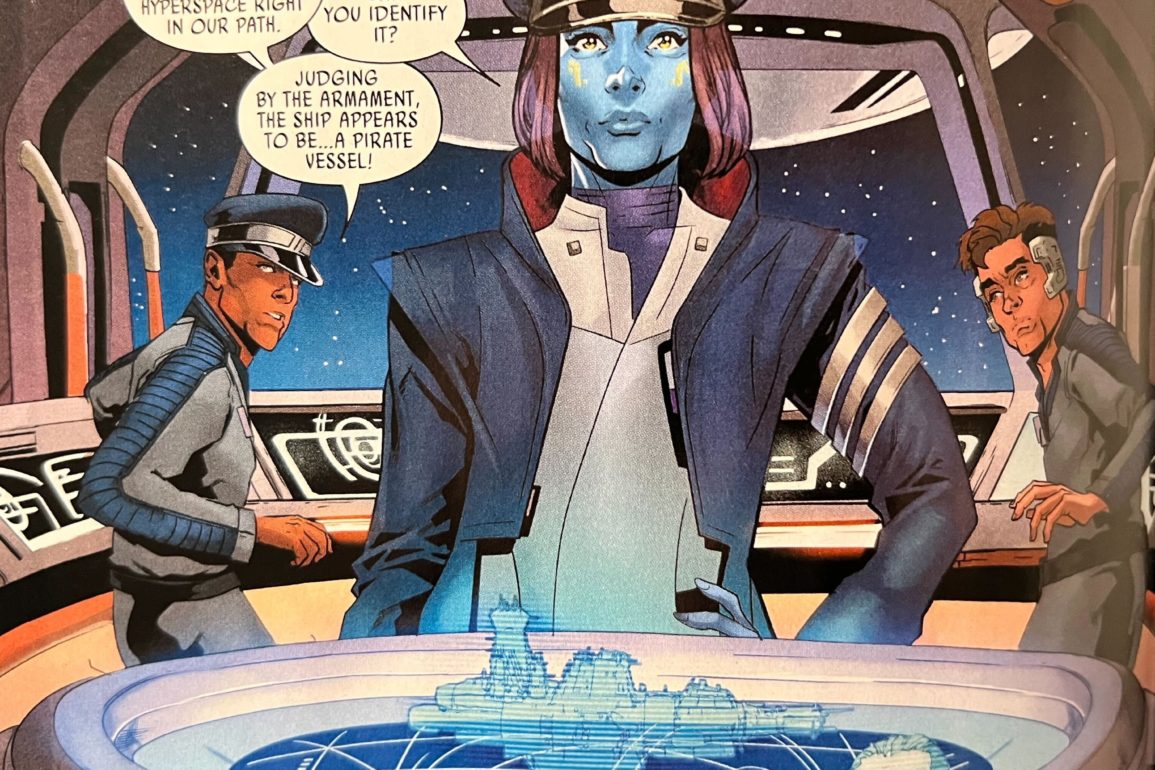 “Star Wars: Halcyon Legacy #1” begins shortly before the present-day and dives into the past to weave backstory while setting up the story that guests will live out. You may wonder why a high-class cruise would stop somewhere like Batuu — the Halcyon is celebrating its anniversary by taking the same route as its maiden voyage.

Before navigation computers and hyperspace lanes were established in the galaxy, Batuu was a popular stop for travelers of all kinds. But some onboard the ship may have ulterior motives for visiting a planet occupied by both the First Order and the Resistance.

We begin with the launch pod that will transport guests from a Central Florida parking lot to outer space. “Do you know how hard it is to get reservations on the Halcyon?” a guest quips. (We do — it’s not that hard. There’s plenty of room.)

Meet D3-09, a logistic droid. They name-drop Cruise Director Lenka Mok (pictured below) immediately, and we meet our main characters.

Of course, youngling Cimina is eager to get to the Lightsaber Training Pod. We get our first flashback into the history of the Halcyon as D3-09 remembers Shorr’s first visit.

That’s right — Anakin Skywalker and Padmé Amidala were passengers aboard the Halcyon spying on a suspected Separatist and came face-to-face with the fearsome Asajj Ventress. We’re set to learn more about Anakin and Padmé’s adventures on the ship in the third issue of the comic, which will release on April 13.

Captain Riyola Keevan makes a grand entrance as the Halcyon is hailed by a pirate vessel. Keevan is a Pantoran who is the current captain of the ship. Guests will meet Keevan during their stay at the Galactic Starcruiser.

Do the references to pirates attacking the Halcyon seem familiar? That’s because it was directly referenced at the end of the welcome video sent to upcoming Halcyon guests. At the time, it seemed like an out-of-place bit, but perhaps it is alluding to the story that will unfold for Starcruiser guests.

D3-09 distracts Cimina from her fear of the pirates by regaling her (and us) with a story from the long history of the Halcyon.

We go back 265 years, in the early days of the cruiser, to find Jedi Master Nib Assek and her padawan Burryaga in a guest cabin (and we know Wookies are big, but this does not reassure us about the size of those bunks). The two Jedi are some of the main characters in the “High Republic” series, but you won’t need to be familiar with them to understand the story.

Shug Drabor, an Anzellan (the same species as Babu Frik from “Star Wars Episode IX: The Rise of Skywalker”), is the mastermind behind the Halcyon. Drabor designed it and its sister ship, the Wanderlight. Given the timeline, guests are unlikely to meet Drabor on their journey.

Pictured above: guests onboard the Starcruiser during its “story moments.”

After a lengthy, high-stakes battle, we return to the present day, where D3-09 tells Cimina that “Shug was so grateful to the Jedi for saving his ship and its compass that he built the Lightsaber Training Pod onboard the Halcyon as a token of appreciation.” Given that the Starcruiser timeline takes place during the sequel trilogy when Rey and Luke are the only known Jedi, this nicely patches the plot hole of the lightsaber experience.

The story ends as the pirates move to strike against the Halcyon. Captain Keevan has refused to give up the alleged spy (herself) who sent communication from the ship to the Resistance.

The immersive two-night excursion is being billed as an adventure you can see, feel, and live, but Imagineers have been quick to emphasize that guests can choose their own level of involvement. There’s something for every taste, from the casual fan to those who love the deep lore. Here at WDWNT, it’s no secret that we love the stories behind the creations, from the Society of Explorers and Adventurers to the real-life histories of the parks.

Four more issues of “Halcyon Legacy” are set to explore the ship’s storied past, all releasing after the grand opening. If you’re a fan who likes a deep dive into the details, keep an eye out for our full coverage of the grand opening of the Star Wars: Galactic Starcruiser, beginning March 1.