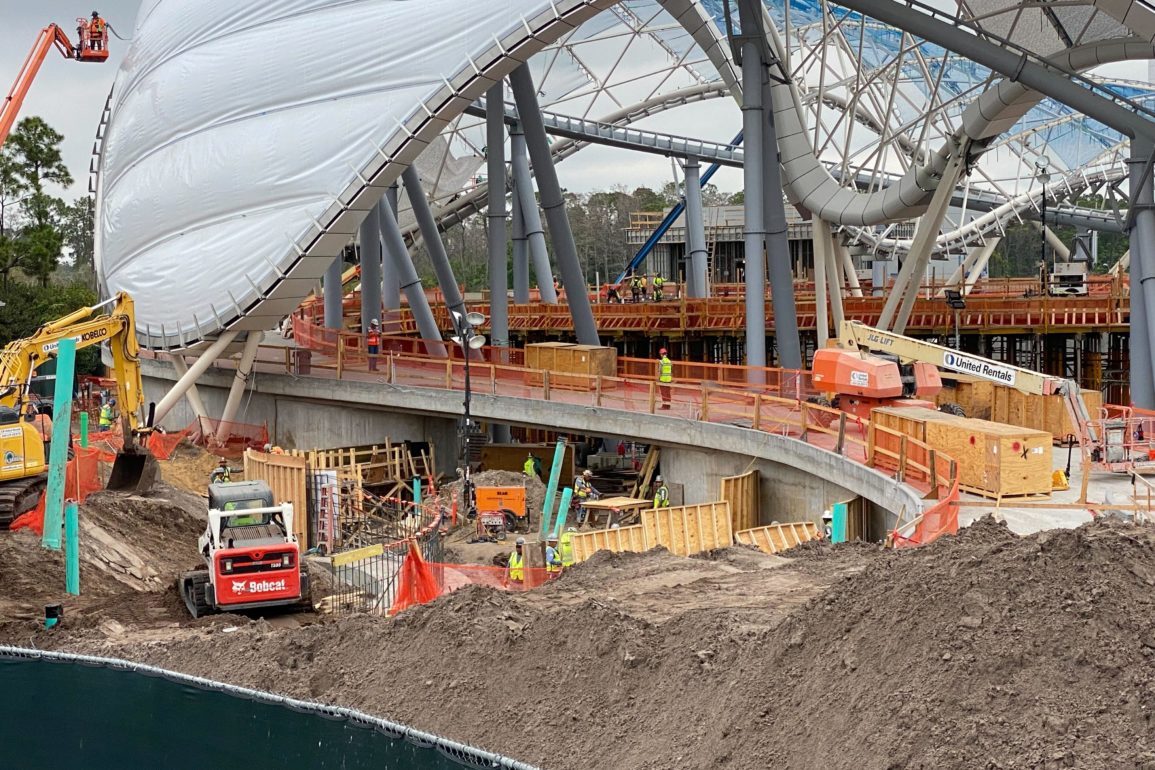 The exterior portion of TRON Lightcycle / Run at Magic Kingdom continues to be covered as strips of canopy are installed on a framework.

These giant pieces stretch across the framework between white poles, replacing the temporary blue netting that keeps workers protected.

There were two crew members at the top of the new piece and two at the bottom, while another was in a cherry picker above.

We saw one worker hammering something that presumably secures the canopy.

The workers are able to stand and walk on the canopy, just like the blue netting, but are also attached to safety ropes.

Along the edge of the canopy framework, several vertebrae pieces are covered in teal pieces and orange cones, also to keep the workers protected.

More white paneling has been installed between the vertebrae.

As we watched, the cherry picker was lowered to the two crew members at the edge of the canopy.

The two on top continued to work on their end.

Meanwhile, we saw crew members on the lockers building next to the coaster.

The building is now connected to the walkway that leads from Tomorrowland to the entrance of TRON Lightcycle / Run. Guests will be able to stop at the lockers first.

An overhang sticking out of the top of the building has yet to be covered in paneling.

There are temporary wood railings around much of the walkway as well.

For now, yellow supports are visible beneath this section of walkway.

Nearby, we saw a tank on a truck bed, with a green tube running from it out of view, towards the lockers.

We can also get a relatively good look at where the coaster re-enters the show building.

This opening was once covered by scaffolding, but was evidently completed and the scaffolding was removed.

From the Tomorrowland Transit Authority PeopleMover, we saw more crew members working on the canopy.

There are two humps of the canopy framework, with work focused on the one closest to the Tomorrowland Speedway right now.

This one is almost entirely covered in white strips now.

There was a crew member in a cherry picker and another standing atop the canopy.

On the ground, work has progressed on the second walkway — perhaps the exit — that will go under the first. A curved line of wood and rebar is on the edge of a paved section.

Above, wooden crates sit on the main walkway.

We could see several crew members on the section of walkway near the lockers.

The Walt Disney World Railroad will travel through a tunnel beneath the coaster.

Crew members in another cherry picker were adding more paneling to the edge of the framework.

The paneling is protected by grey sheeting during installation.

Work has picked back up near the entrance to the attraction, where we saw crew members in two scissor lifts working on the entrance canopy.

There is still no announced opening date for TRON Lightcycle / Run, which was originally supposed to open in time for Magic Kingdom’s 50th anniversary on October 1, 2021.

Next
Disney Princess Half Marathon, 2022, The Haunted Mansion, and More Ornament Designs Now Available in MaDe Kiosks at Walt Disney World