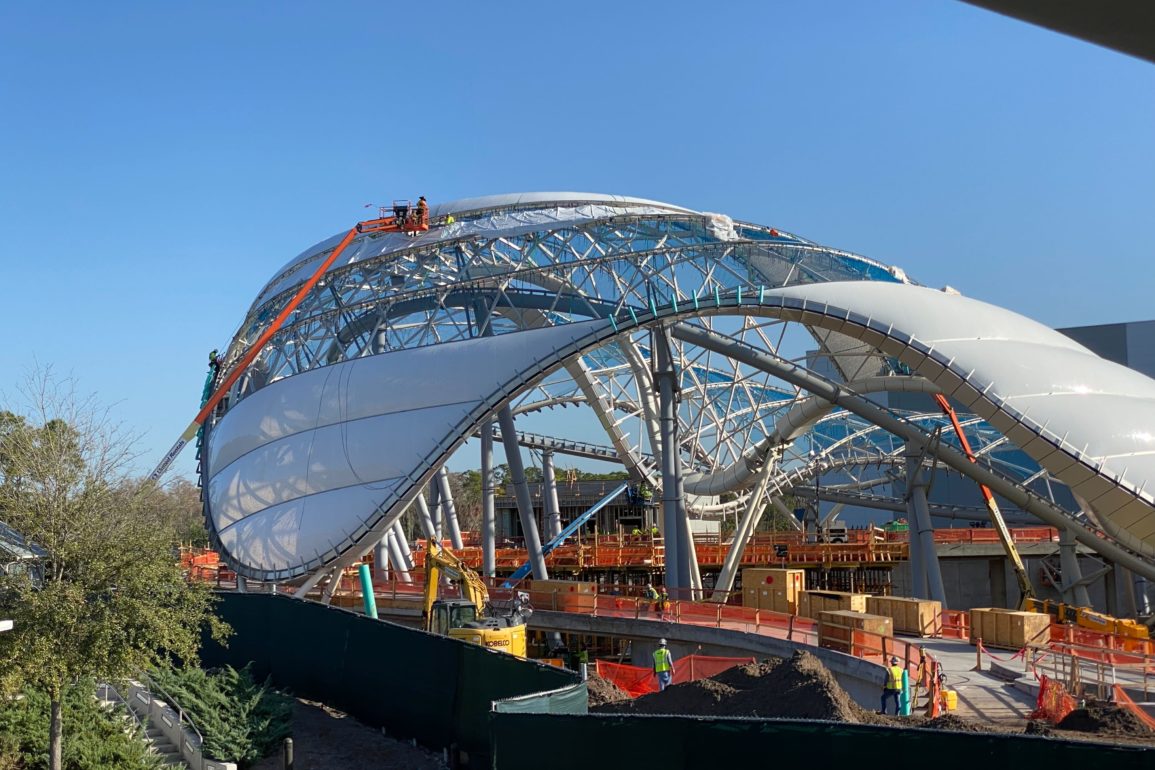 Installation of canopy pieces continues above the TRON Lightcycle / Run coaster in Tomorrowland at Magic Kingdom.

When completed, the canopy will cover the entire exterior portion of the coaster, with lights that race alongside the lightcycle ride vehicles.

A few days ago, we saw a strip of canopy installed on the framework’s highest point.

Another piece has been installed alongside it.

Crew members were still securing the piece when we rode by on the PeopleMover this morning.

The large white fabric pieces are pulled taut across the framework.

Some crew members were in a tall cherry picker, while others were on the framework itself.

We saw several more crew members on the ground, near the sidewalk that will lead from Tomorrowland to the coaster.

The main walkway was paved several weeks ago.

Crates sit on it as work on the railings continues.

A second walkway is being constructed beneath the first, and this is where we saw workers congregated.

A semi-circle wood railing seems to outline where the second walkway will be.

This might lead from the exit of the ride, while the other leads to the entrance.

The Walt Disney World Railroad will also go beneath the coaster through a tunnel that has yet to be constructed.

The side of the coaster facing Space Mountain is now mostly covered with white canopy, with five strips running horizontally across the framework.

We saw some crew members in a cherry picker working on the edge of the canopy, which is covered in small pole pieces and paneling.

From Storybook Circus, we got another look at crew members working on the canopy.

Some of the poles at the edge of the canopy have been covered with teal pieces and orange cones, possibly to keep workers safe.

Through the temporary blue netting, we can see some of the white paneling that covers the interior edge of the canopy framework.

More white paneling will be installed between the vertebrae poles as construction continues on the canopy.

Are you excited to eventually ride TRON Lightcycle / Run in Magic Kingdom? Let us know in the comments.