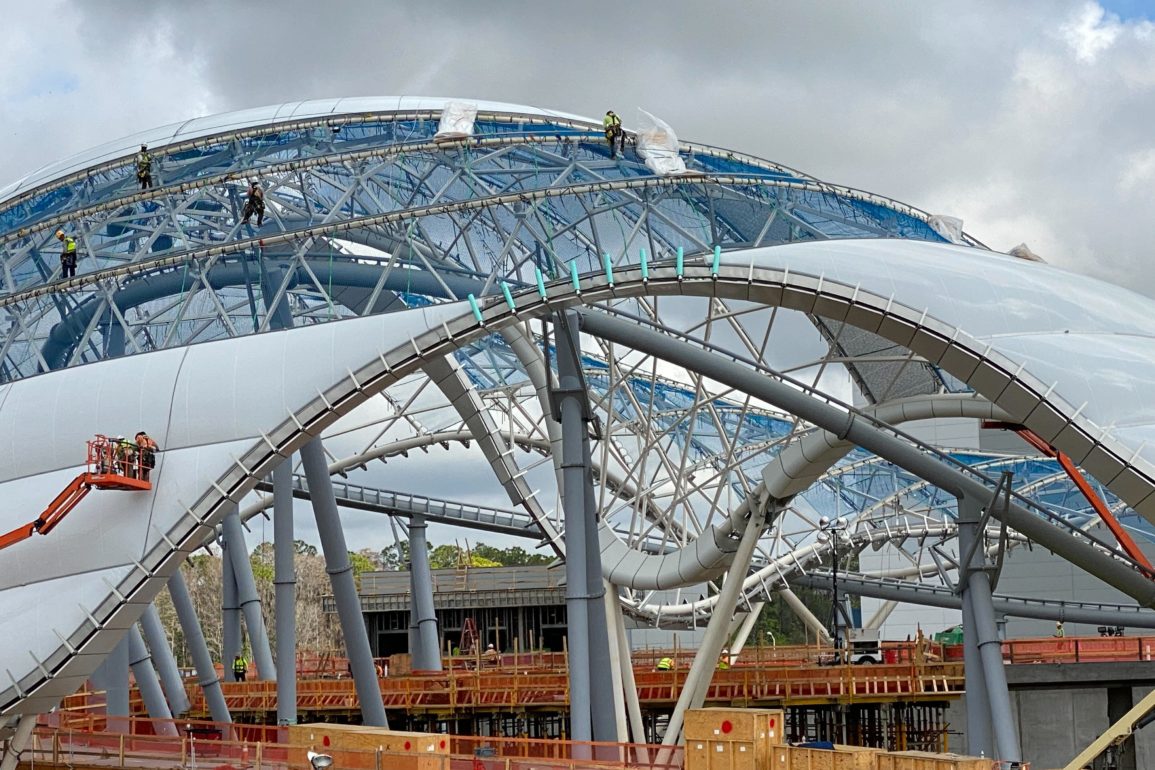 We could see the edge piece from Storybook Circus. It’s cut to fit the unique curves of the framework.

Crew members were in cherry pickers working on the vertebrae-like pieces surrounding the canopy framework.

In addition to the orange cones sitting on some of the vertebrae pieces, there are now green noodle pieces.

Blue painter’s tape is also visible between the vertebrae.

These cones and noodle pieces may be to protect the canopy and workers while pieces continue to be installed as the vertebrae pieces do come to a dull point.

Paneling will eventually fill the spaces between the vertebrae.

We could see some paneling with grey sheeting still on it.

We also took a look at the locker structure next to the coaster.

This platform has temporary wood railings.

Some of the steel is still exposed until more wall paneling is installed.

From near the Tomorrowland Speedway, we could see the new canopy piece at the highest point of the framework.

This long strip runs almost the entire width of the canopy.

This leaves three rows empty between the top strip and previously installed strips at the bottom.

The crew members were still securing the canopy piece when we stopped by.

One crew member looked like they were having fun bouncing on the temporary blue netting, and we can’t blame them.

The blue netting is for the safety of the workers and is being removed as the final canopy is installed.

The workers are also attached to ropes when working on the canopy.

They were making their way down the canopy as we rode by on the PeopleMover.

There are some smaller plastic-covered canopy pieces along the canopy.

We noticed this week that this area was being cleared of dirt for the second sidewalk that will wind under the first.

Dirt has been moved aside and flattened to make way for the work.

Construction materials sit on the ground and in crates on the already paved sidewalk. The median at the beginning of the paved section will hold a TRON Lightcycle / Run sign.

A lone standing wall was also installed earlier this week for an unknown reason, though it is possibly part of the tunnel for the Walt Disney World Railroad.

We didn’t see any crew members near the entrance today, which is unusual.

There is no current opening date for TRON Lightcycle / Run, and it may not even open this year. It was originally scheduled to open in time for the park’s 50th anniversary on October 1, 2021, but was delayed, partially due to COVID-19.