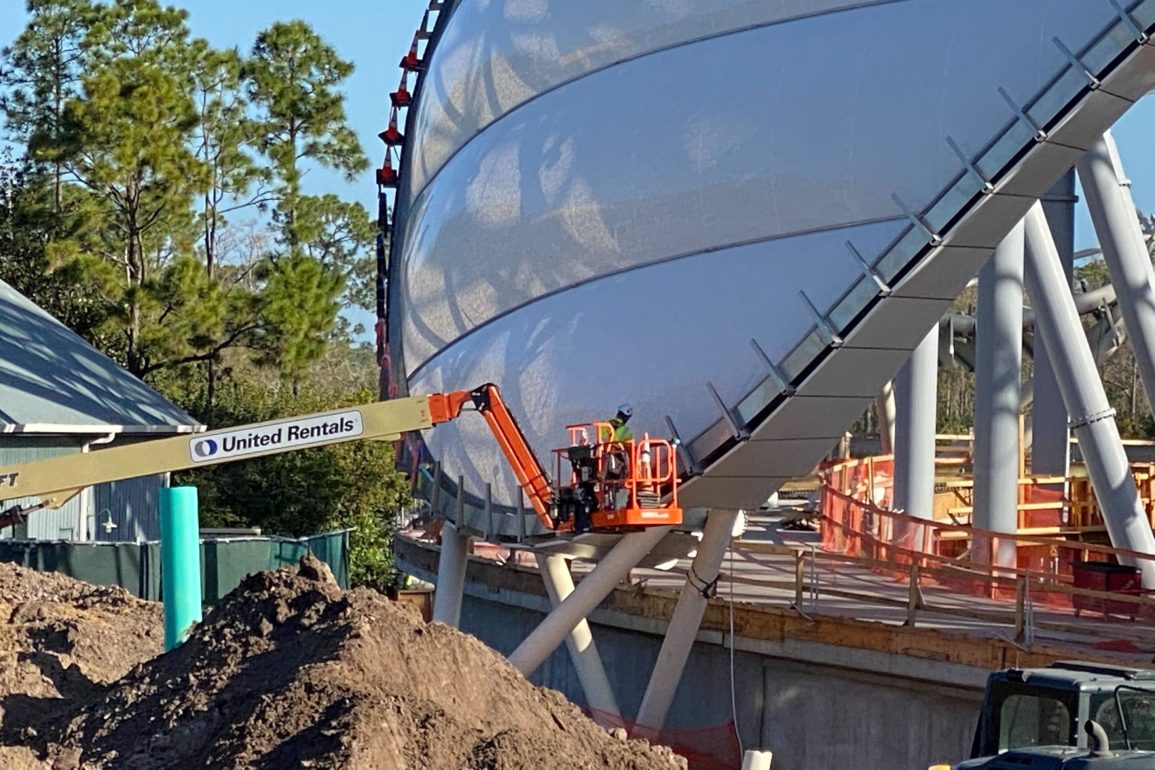 It’s another sunny morning at Magic Kingdom, which means it’s time to hop on the Tomorrowland Transit Authority PeopleMover and check in on construction of TRON Lightcycle / Run.

Two lower sections of the framework are now covered in white strips of canopy.

A third, small piece was installed on the Tomorrowland Speedway side since yesterday morning.

Crew members in a cherry picker were still working on securing the new canopy piece.

More crew members in cherry picker vehicles were working on the edge of the canopy framework, installing “vertebrae” pieces and white paneling.

A lot of dirt has been moved around near the sidewalk that will lead guests from the rest of Tomorrowland to TRON Lightcycle / Run.

There are several piles of dirt between the coaster and Space Mountain.

Space is being cleared for a second sidewalk that will go beneath the first (see it in concept art at the end of this article).

As we reported yesterday, the entrance of the attraction is surrounded by tarps right now.

There are black tarps hanging from the smaller entrance canopy framework and blue tarps on the show building.

Several crew members were on the platform beneath the entrance canopy framework this morning.

Once completed, the white canopy will be lit from below.

There’s still plenty more canopy to be installed though.

Here’s what the canopy looks like from the underside, as seen from Storybook Circus.

The blue safety netting is temporary and being removed as the final canopy is installed.

We can also see a curve of white paneling on the edge of the canopy from this angle.

This structure will likely be for lockers.

Wall paneling has yet to be installed on all sides of it, but we haven’t seen much work on it in recent weeks.

Here is the concept art for the exterior of TRON Lightcycle / Run, which currently has no opening date. Guests will walk past a sign for the attraction and beneath the canopy on an elevated sidewalk to the attraction’s entrance. A second sidewalk winds beneath the first. The tunnel through the center is for the Walt Disney World Railroad.

Are you excited to eventually ride this coaster? Let us know in the comments.