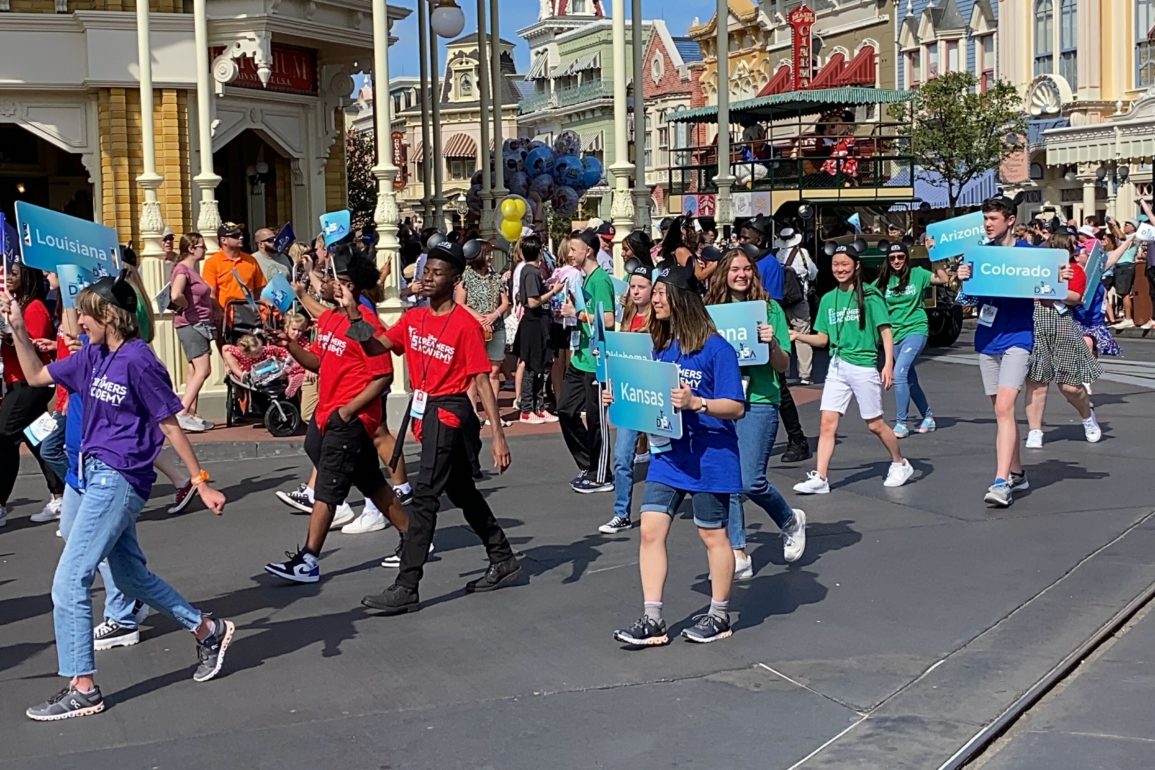 Today was the beginning of the 2022 Disney Dreamers Academy, an annual event that introduces students to an array of new immersions, such as sessions teaching valuable life tools as well as leadership skills, effective communication techniques, and networking strategies. These workshops introduce the Disney Dreamers to diverse career paths within business, entertainment, and sciences, including career opportunities within The Walt Disney Company.

The event was kicked off with a parade at Magic Kingdom this afternoon.

This is the 15th year of Disney Dreamers Academy. Cast Members at the front of the parade carried a banner.

Mickey Mouse led the parade in a marching band uniform.

He was followed by a marching band.

A car with a couple of Disney Dreamers, as well as this year’s ambassador, Kelly Rowland, pulled up next.

A troupe of Disney Dreamers walked behind the car, waving flags and wearing colorful Academy shirts and Mickey ears.

Behind the walkers was the familiar gazebo float, carrying a few more Dreamers and Princess Tiana.

Chip, Dale, Pluto, and Goofy also walked in the parade.

Even more of the Dreamers, many carrying signs representing their states, followed them.

The Disney Dreamers Academy program is an important part of Disney’s commitment to supporting diverse communities, such as Black America, by encouraging the next generation to think big and to carry what they learn with them back home, so they can relentlessly pursue their dreams and make a difference in the lives of others.

Over the years, Disney Dreamers Academy has inspired more than 1,300 students from across the country. Each year, graduates have gone on to become doctors, engineers, performing artists, entrepreneurs, and more, and some have transitioned into mentors to the Disney Dreamers who followed them.

We hope all the Disney Dreamers have fun this weekend!