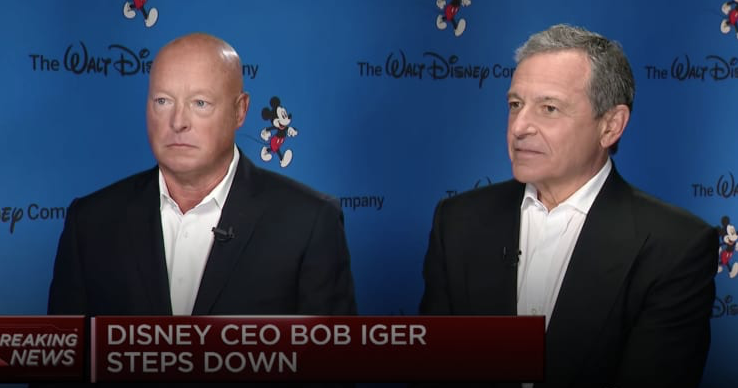 Current and Former Disney CEOs Bob Chapek and Bob Iger Had a Falling Out, No Longer Speak

According to CNBC, Disney CEO Bob Chapek and former CEO Bob Iger had a falling out and no longer keep in close contact. The falling out occurred around the time Iger resigned as CEO of The Walt Disney Company.

Iger resigned as CEO in 2020 just weeks before all Disney Parks shut down due to the COVID-19 pandemic. Iger appointed Bob Chapek as his successor. “I can’t think of a better person to succeed me in this role,” said Iger, a day before Disney started closing its parks. “I’ve watched Bob [Iger] lead this company to amazing new heights, and I’ve learned an enormous amount from that experience,” Chapek said.

New York Times columnist, Ben Smith, published a story about a month later after reaching out to Bob Iger by email. Iger told Smith he wasn’t going to leave Chapek to deal with this new COVID-19 crisis alone and would stick around to assist him in running the company.

In his email, Iger said, “A crisis of this magnitude, and its impact on Disney, would necessarily result in my actively helping Bob [Chapek] and the company contend with it, particularly since I ran the company for 15 years!”

Chapek was reportedly furious when he saw this story and expressed that he did not need any assistance running the company. An individual who witnessed Chapek’s reaction said, “It was a turning-point moment.”

Ever since then, Iger and Chapek haven’t been able (or willing) to mend their relationship.

Iger and Chapek have had plenty of opportunities to work together, but the two executives barely speak to each other.

“Anyone succeeding Iger, who had been Disney’s CEO since 2005, was going to have a difficult time filling his shoes. Iger was generally beloved by Hollywood and highly respected as a CEO, particularly after orchestrating a series of intellectual property acquisitions — of Pixar, Marvel and Lucasfilm — which will likely go down in media history as three of the smartest deals ever. Iger, 71, has even flirted with running for president of the United States.

Chapek, meanwhile, has a harder exterior and at times, according to colleagues, struggles with emotional intelligence — which happens to be Iger’s strength.” — CNBC

An example of this lack of emotional intelligence is the way that Chapek handled the criticism that The Walt Disney Company faced for funding sponsors of Florida’s “Don’t Say Gay” bill. Chapek originally sent out an email to Disney Cast Members simply acknowledging the situation, and received immense backlash for it. A couple of days later, he sent out an additional email apologizing for the company’s lack of response, finally denouncing the bill, and vowing to donate funds to protect LGBTQ+ rights.

Iger reportedly regrets how the change of command of The Walt Disney Company transpired. But he has no interest in returning to the company. In an interview with the New York Times, Iger said, “I was CEO for a long time. You can’t go home again. I’m gone.”

It will take some time for Disney fans and Cast Members to be able to trust Chapek with the ideas and goals he has set out for the company. Every anonymous source interviewed for this story said Chapek may not be a people person, but he is “a skilled and determined operator.”

Chapek’s contract as CEO of The Walt Disney Company is currently slated to end in February of 2023.