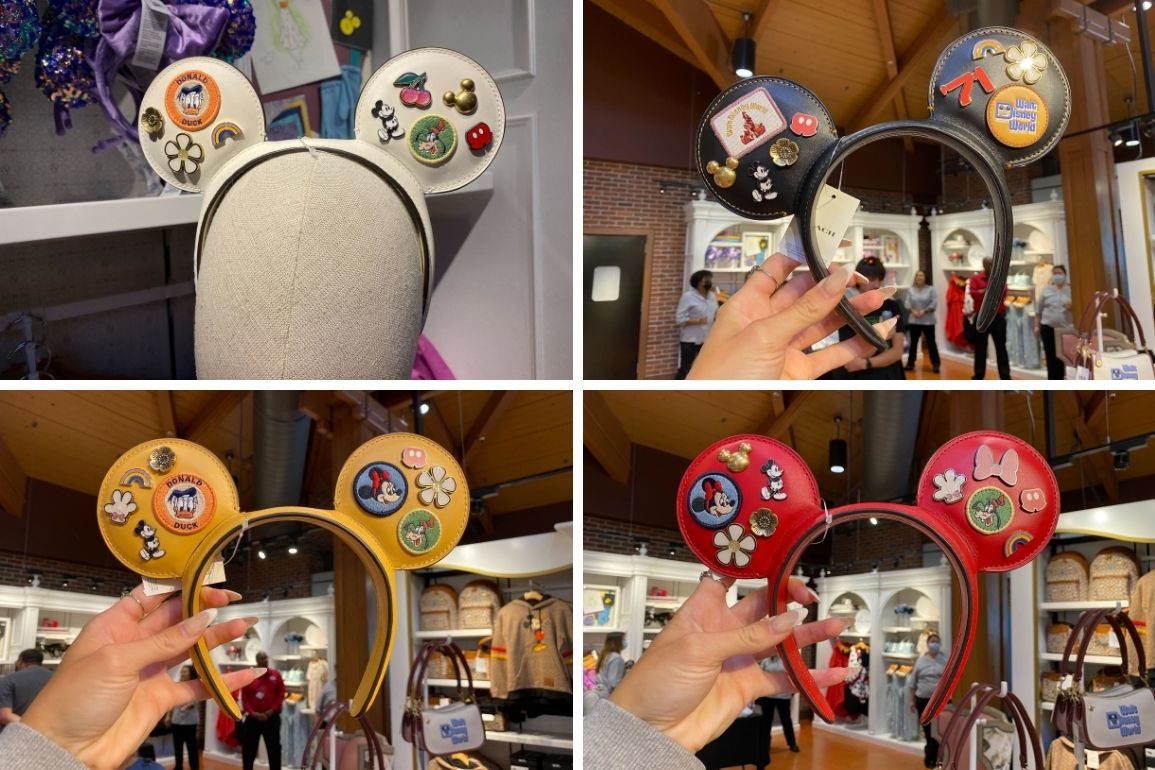 The new 50th anniversary Coach x Walt Disney World collection has arrived at the Magic Kingdom, and we were excited to find four new ear headbands! Each pair is dedicated to a different Disney resort around the world.

Each ear headband is similar. They are leather and decorated with appliques.

The white headband has pins of flowers, a rainbow, cherries, Mickey, Mickey’s iconic red shorts, and a gold Mickey head.

It also sports patches of Donald Duck and Goofy.

It is dedicated to Disneyland, with the opening year of 1955 embroidered on the side.

Disneyland Resort and Sleeping Beauty Castle are embossed on the back of the left ear.

Coach is embossed on the left side of the ear headband.

The black headband has some of the same pins with the addition of a red ’71 pin.

The year 1971 is embroidered in gold thread on the side of the headband.

The back of the ears feature the Walt Disney World logo and Cinderella Castle embossed in black.

The resort name and date are stamped in gold writing on the inside of the headband.

Coach is embossed on the left side of the headband.

There’s also a pink Minnie Mouse bow and a white glove with a matching bow on the wrist. The patches feature Minnie and Goofy.

It is dedicated to Shanghai Disney Resort, with its logo embossed on the back of one ear.

The opening year of 2016 is embroidered on the side.

“Shanghai Disneyland Park est. 2016″ is printed on the inside of the headband and Genuine Glovetanned Leather” in gold writing.

“Coach” is embossed down the left side of the headband.

The last headband is yellow and features a combination of the pins and patches found on the other three headbands. Disneyland Paris inspires this one.

The Disneyland Paris version features patches of Goofy, Minnie Mouse, and Donald Duck along with pins of Mickey Mouse, flowers, and rainbows.

The opening year of 1992 is embroidered on the side.

The interior of the band reads “Disneyland Paris est. 1992” and “Genuine Glovetanned Leather in gold print.

The back left ear features an embossed Disneyland Paris logo.

Coach is embossed on the left side of the headband.

Which new Coach x Walt Disney World ear headband do you like? Let us know in the comments.

Stay tuned for a look at the full Coach x Walt Disney World collection, including bags, shoes, apparel, and more.