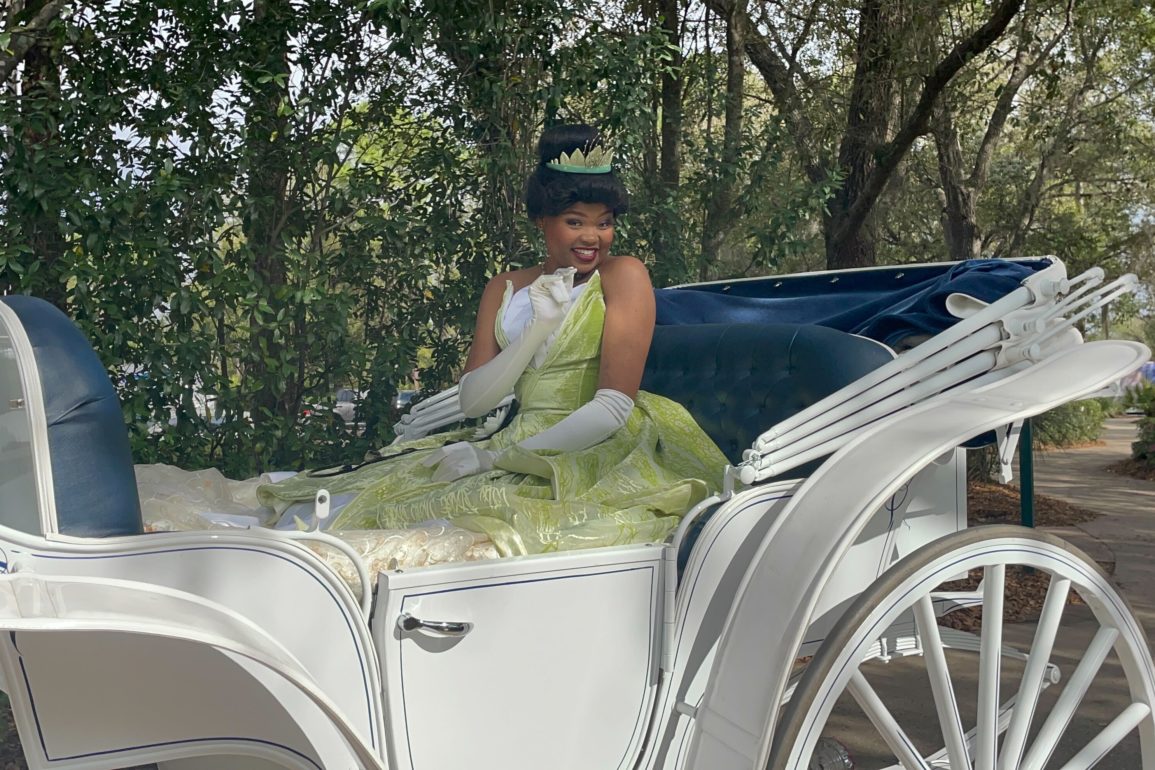 Cast Members led the parade with a Mardi Gras 2022 banner.

They were followed by a smartly-dressed jazz band.

Tiana rode in a horse-drawn carriage.

Tiana was followed by a cart simply decorated for Mardi Gras with purple, gold, and green decorations.

Cast Members handed out beads to guests on the parade path.

The next cart was inspired by Mad Tea Party.

The back of the cart had tea cups sitting in a bed of painted roses.

Some golf carts were inspired by different attractions, including this Enchanted Tiki Room cart.

It was covered in flowers, green garland, and had an Enchanted Tiki Room sign on the front.

The Cast Members with each “float” dressed up, too. After the Enchanted Tiki Room cart was a Haunted Mansion group wearing purple and black.

One Cast Member dressed up as the ghostly bride.

The cart had faux cobwebs and a coffin sitting on top.

It had a portrait wall on the back made to look like the classic purple wallpaper from the Haunted Mansion and decorated with various famous portraits from the attraction.

There was a Polynesian-inspired cart with more flowers and colorful balloons.

This golf cart and Cast Members were dressed up like Country Bear Jamboree.

The heads of Marvin, Buff, and Max were on the front of the cart, beneath a Country Bear Jamboree marquee.

Logs and red curtains decorated the sides and each Cast Member riding the cart dressed as a different character.

There was a Casey Jr. train with Dumbo atop it.

The final float was an impressive recreation of Jungle Cruise boat Nile Nellie.

Steam even arose from the boat’s funnel.

Watch the full parade in our video below.