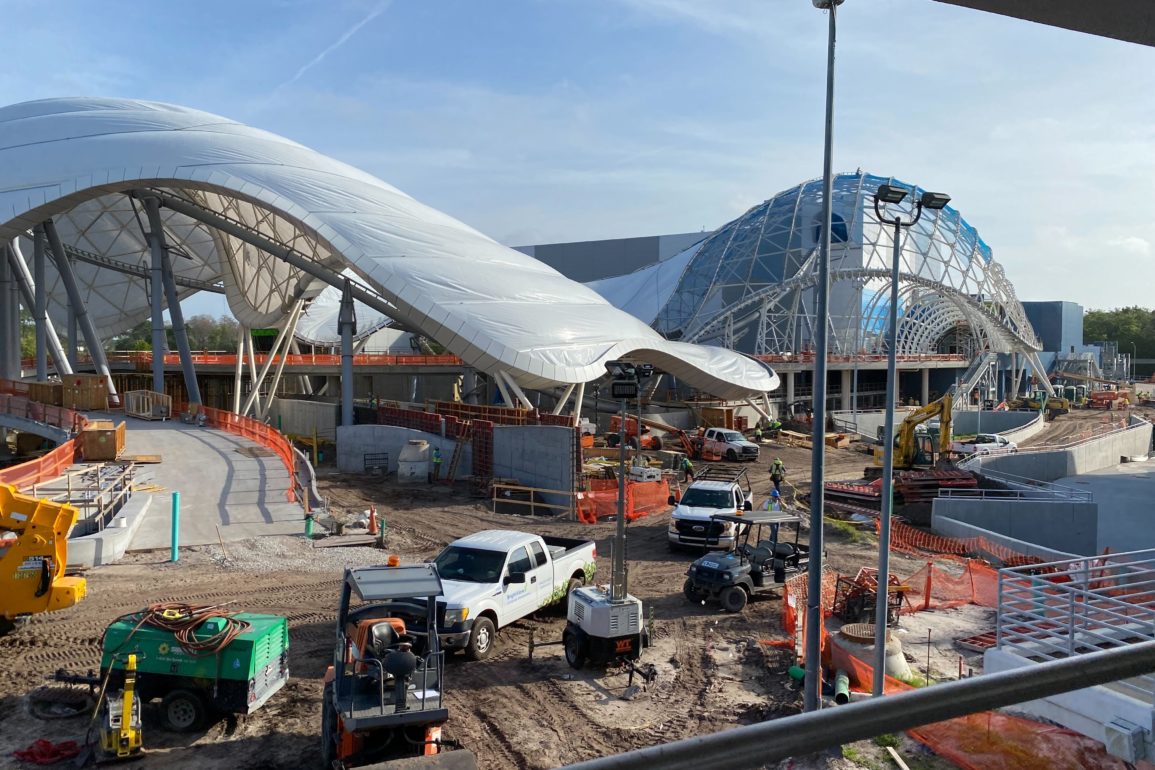 While the lightcycle vehicles are being push-pull tested, construction around the TRON Lightcycle / Run track continues.

It looks like more than half of the canopy has now been installed on the framework above the coaster.

The canopy is made up of long white strips pulled taut and secured on the framework.

The portion of the framework closest to the show building remains exposed. We saw a crew member standing atop the blue safety netting this morning.

A small canopy will also create a tunnel to the main entrance of the coaster.

Crew members were working on this smaller canopy’s supports in a scissor lift.

White paneling now covers most of the edge of the canopy framework.

Crew members were working on the paneling in cherry pickers under the canopy.

Other crew members were installing paneling near the Tomorrowland Speedway.

The paneling is covered in grey sheathing when it is installed.

On the ground, work continues on the second walkway below the entrance. This walkway will connect Storybook Circus and Tomorrowland.

Concrete walls run along the sides of the walkway path.

Wood planks and teal green poles sit in the walkway site, which is blocked off by orange safety netting.

Wood crates sit on the main walkway, which has no permanent railings yet. Its railings are also currently made of wood and orange netting.

The planter surrounded by a wood railing at the start of the walkway will house a TRON Lightcycle / Run sign, according to concept art.

Beyond the walkway will be a tunnel for the Walt Disney World Railroad.

Walls partially covered in concrete currently form the tunnel, which runs under the coaster.

It will be fully enclosed once completed.

Guests will talk the main walkway beneath the track and canopy, over the railroad tunnel, past the lockers building — stopping there if they need, of course — and to the coaster. entrance.

We didn’t see a vehicle on the track today, but we could see some wood railings near the coaster launch, where we last saw a vehicle.

More wooden crates and structures sit on the ground near the coaster launch, which is beneath the walkway and entrance.

We could see some crew members near the launch site.

From Storybook Circus, we can get a look at the other side of the canopy.

Here we see where white paneling has yet to be installed along the edge of the framework.

Lights will illuminate the canopy when the coaster is fully operational.

We saw a crew member scaling the canopy.

Tubing runs beneath the paneling.

The locker building is on this side. It’s mostly enclosed, but there is some exposed green sheathing around the entrance.

Crew members in a cherry picker were working on the green sheathing today.

A wood box also sits atop the building.

Here’s a look at the concept art of TRON Lightcycle / Run next to Space Mountain.

And this concept art gives a closer look at the walkways and Walt Disney World Railroad tunnel, as well as an idea of what it will all look like when lit up at night.

Of course, we already have a relatively good idea of what the coaster will look like, as it will be an almost exact copy of TRON Lightcycle Power Run at Shanghai Disneyland. Watch our POV video of that coaster below.

There is no current announced opening date for TRON Lightcycle / Run at Magic Kingdom.