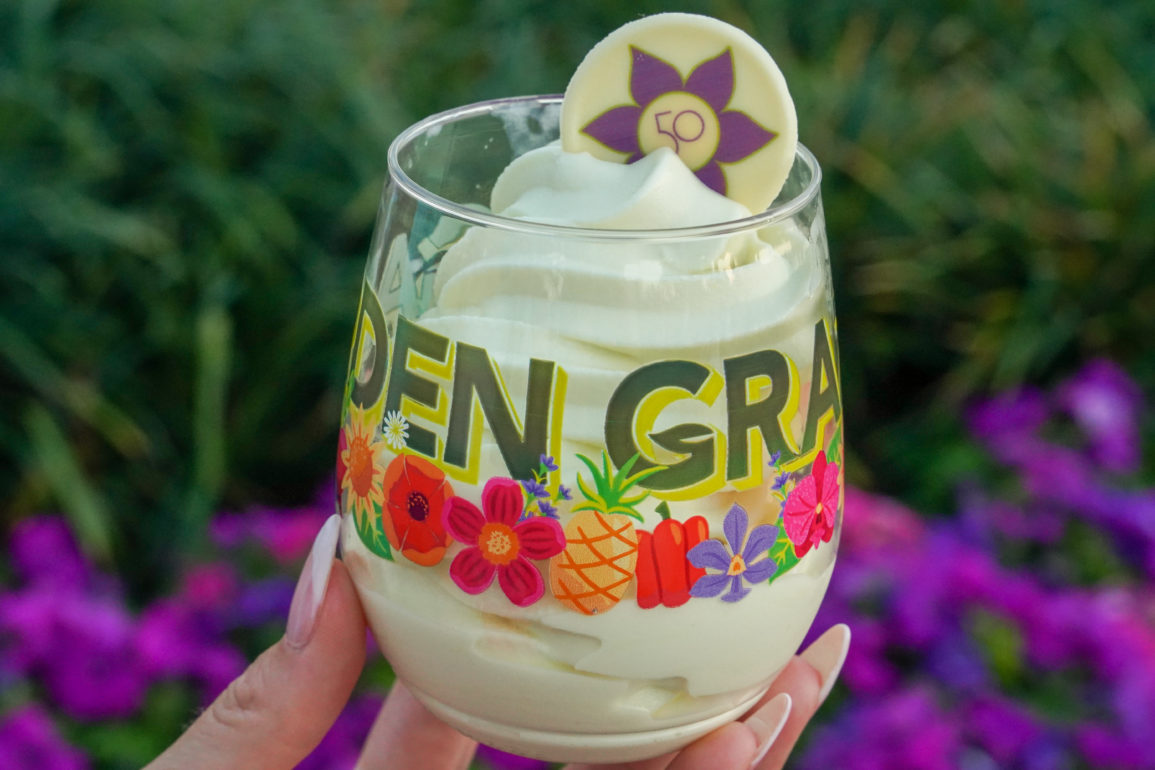 A list of the items that are part of the Garden Graze can be found in a festival passport as well as on signs in World Showcase.

Cast Members will stamp your passport when you purchase the corresponding treat. Though, as we learned, you can swap out items from the same Outdoor Kitchen, as long as you purchase an item at each of the five.

Here are the featured foods on the Garden Graze:

The seasoning on this corn on the cob is good, but nothing special. Corn on the cob is usually street food for fairs and flea markets, so it feels like there was a lack of effort/ingenuity in creating a dish for this booth. They could’ve done sliders or something instead. At the end of the day, this is just… corn. At least it takes a good photo. Read our full review of Flavor Full Kitchen here.

This wasn’t bad, but the milk was disproportionately in there. Some parts were denser than others. It wasn’t completely flavorless, but there really weren’t any prominent flavors. The cake was dry, and the thing we tasted the most was the vanilla topping. The denser parts of the cake had a strong oat milk taste. If that doesn’t bother you, it might be worth a try. Read our review of La Isla Fresca here.

Basically, it is what is it says it is. You can taste the onions, hash brown flavor of the potato, and applesauce. It’s a very simple dish, but delivers what it says. With so many other options, we’d probably recommend other dishes, like at Mexico. This one’s nothing terribly special. Read our full review of Bauernmarkt: Farmer’s Market here.

The grilled baby vegetables are a solid vegetarian choice. It’s not a flashy dish and has a pretty basic flavor palate. The dish includes carrots, zucchinis, and tomatoes that are all well-roasted. The veggies are served with a red pepper coulis and hummus cream, which was our favorite part of the dish. The hummus was your typical hummus, but the red pepper coulis added a punch of rich flavor to the plate. Read our full review of Trowel & Trellis here.

The avocado toast is sure to be a popular option. It is LOADED with avocado, which rises more than an inch or so above the toast. The toast itself is quite nice, offering a nice exterior crunch with a softer interior. The creamy avocado is not the most flavorful spread we’ve had on such an item. It’s not a memorable take on this dish, but many will likely enjoy it. Read our full review of EPCOT Sunshine Griddle here.

Once you’ve collected all five stamps, head to Pineapple Promenade on World Showcase Promenade near Port of Entry to redeem your completer treat.

This year’s prize is a Mango-Lime Dole Whip in a commemorative collector cup, complete with a 50th anniversary white chocolate coin.

The cup has “Garden Graze” emblazoned above a ring of fruits, vegetables, plants, and flowers.

We were told this was a mango-lime Dole Whip, but all we get is lime. It tastes exactly like the lime Dole Whip that we got from Refreshment Outpost when it first appeared at EPCOT, but it’s not as intense in color.

You can’t buy the prize this year, but honestly, it doesn’t matter, as we wouldn’t recommend it. The lime Dole Whip isn’t as good, and it’s extremely tart. You also have to buy the potato pancake, which we don’t recommend.

Ultimately, you’re probably better off buying the pineapple or tangerine Dole Whip and calling it a day.

Previous
Detail Painting and Wiring Work on Xandarian Starship Outside Guardians of the Galaxy: Cosmic Rewind in EPCOT