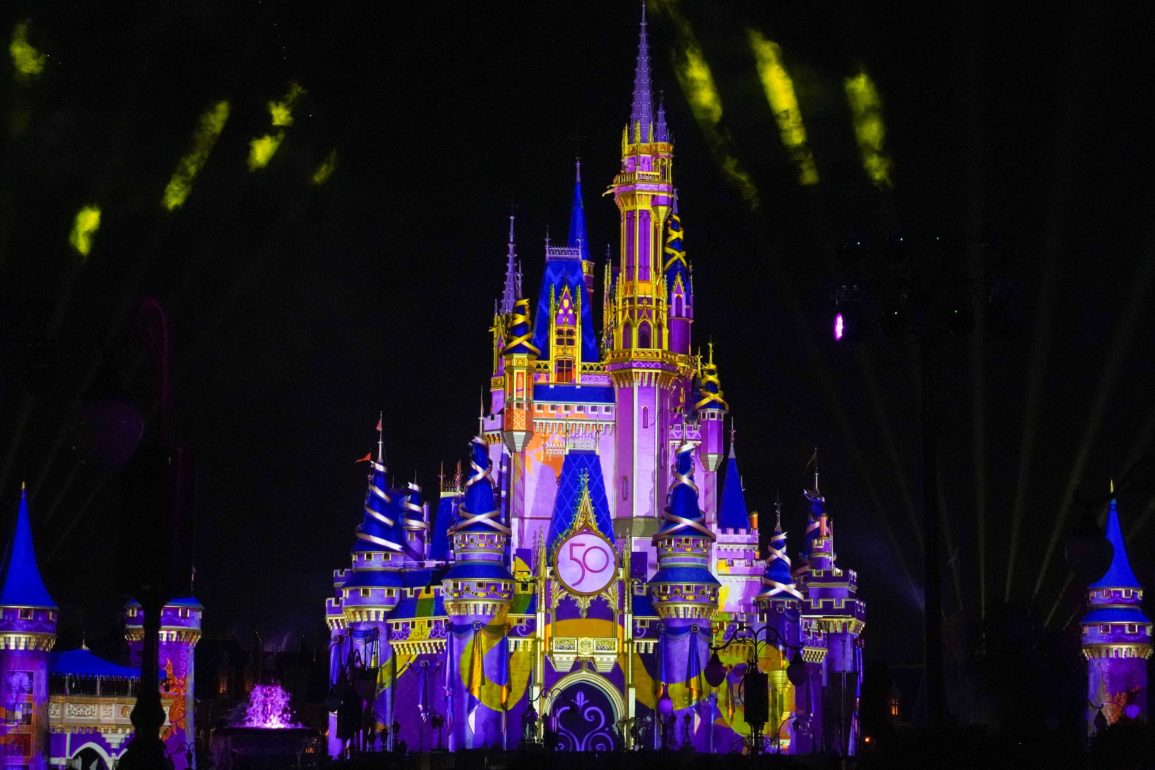 A few months into the 50th Anniversary celebration of the Walt Disney World Resort, there’s still so much information scattered around that we figured we would put together a helpful guide with every single special part of the World’s Most Magical Celebration! If you don’t want to miss out, check out all the offerings below.

“Disney Enchantment” replaced “Happily Ever After” as the nightly fireworks spectacular at Magic Kingdom. See full coverage, including photos and video, here.

“Harmonious” replaced “EPCOT Forever” and “IllumiNations” as the new nighttime spectacular at EPCOT. Watch our video of the full new show here.

This new kite show at Disney’s Animal Kingdom has two different versions: “The Jungle Book” and “The Lion King.”

Each Walt Disney World theme park icon — Cinderella Castle, Spaceship Earth, Tree of Life, and Tower of Terror — lights up as a “Beacon of Magic” every night.

Among the cavalcades at Magic Kingdom is Mickey’s Celebration Cavalcade, featuring the mouse and all his friends dressed up for the 50th Anniversary.

The Electric Water Pageant debuted shortly after Magic Kingdom opened in 1971, and to celebrate this 50-year tradition; it got a new scene.

Check out our complete list of reviews of 50th-anniversary food and beverage items at Walt Disney World.

The golden statues of 50 characters are the main addition in terms of decor for the 50th Anniversary in the parks. Find our complete list here.

Monorail stations and the Ticket and Transportation Center got a fresh new paint job.

The flowerbeds at the entrance to Magic Kingdom got a new look, while the clock on Main Street, U.S.A., got a makeover for the occasion.

A Mickey and Minnie topiary was also added to the entrance. They are standing next to a 50th anniversary cake.

Of course, Cinderella Castle takes center stage for the Anniversary. You can see its initial transformation in this time-lapse video.

EPCOT debuted a floral 50th Anniversary logo for the 2022 International Flower and Garden Festival, and the entrance to EPCOT has a Goofy topiary holding a 50th anniversary cake.

EARidescent flowers also debuted at this year’s Flower and Garden Festival in honor of the 50th anniversary.

The Port of Entry shop got a new 50th Anniversary overlay.

The barges for Harmonious feature the 50th logo when not in use for the show.

Disney Springs has a unique merchandise display for the Anniversary at World of Disney.

Disney’s Grand Floridian Resort and Spa decked out their lobby and shops for the Anniversary.

Even the construction at Disney’s Contemporary Resort got in on the 50th Anniversary theme.

The Polynesian collection features a Loungefly ear headband, apparel, kitchenware, coasters, an ornament, and a MagicBand.

The collection for Disney’s Contemporary Resort also has an ear headband, an ornament, apparel, a MagicBand, and a Loungefly bag.

The Fort Wilderness collection features apparel, a MagicBand, a picture frame, an ear headband, an ornament, playing cards, and games.

We have compiled a complete list, with pricing, of all of the Celebration Collection merchandise here.

We have the complete list of items and pricing from the Castle Collection.

The Vault Collection features several pieces meant to harken back to the first Anniversary of Walt Disney World. See the full collection here.

From keychains to Crocs and cardigans to Harveys bags, the Vault Collection prominently features the original map of the Magic Kingdom.

The Luxe Collection offers a range of upscale pieces for the Disney collector.

In Uptown Jewelers at Magic Kingdom, collectors will find Luxe Logo bags by Kate Spade and Loungefly and luxe ear headband along with a jeweled ear hat.

Additionally, a Luxe Collection black Minnie ear headband, a black logo hat, a logo jacket and sweatshirt, a PopSocket, a decorative plate, a Starbucks tumbler, and a Steiff teddy bear are available.

A number of engravable ID tags are available throughout the Walt Disney World Resort. You can find unique ones at Magic Kingdom, Disney Springs, EPCOT, Disney’s Contemporary Resort, and Disney’s Polynesian Village Resort.

Next
Disney+ Becomes Home of All Things ‘Ice Age’