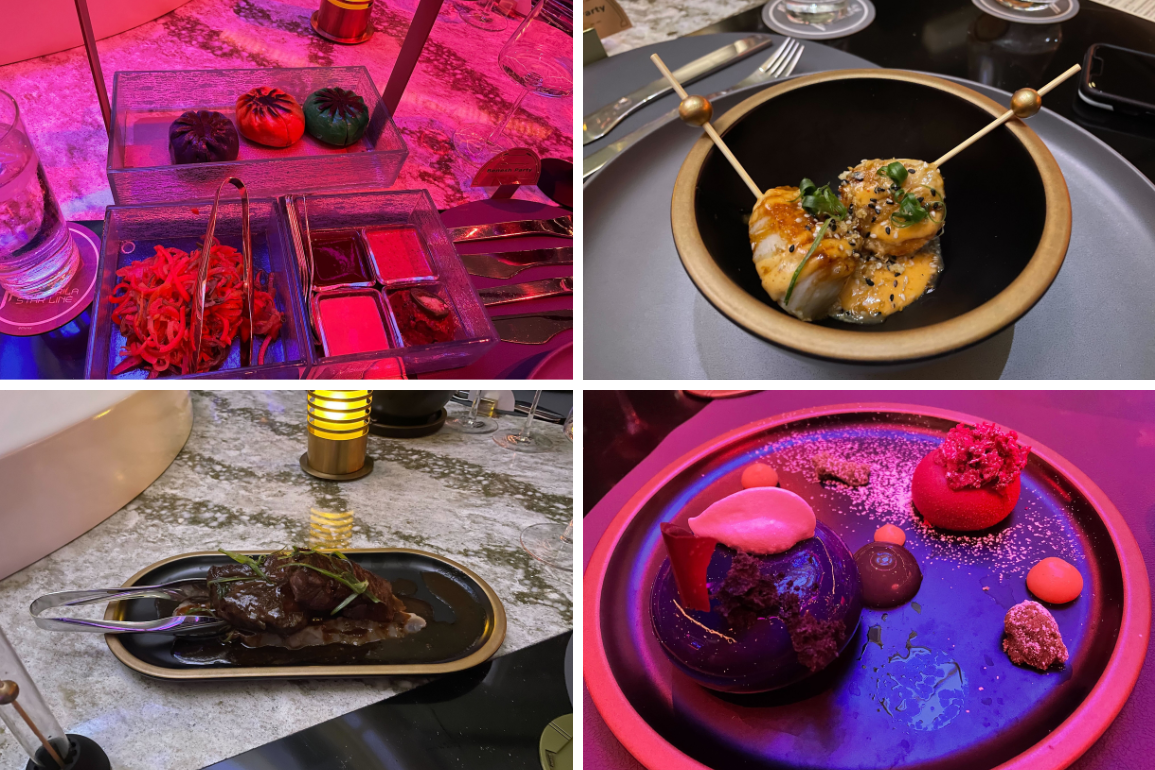 REVIEW: The Captain’s Table Experience for Dinner on the First Night of the Star Wars: Galactic Starcruiser

During the evening with Gaya dinner on the first night of our Star Wars: Galactic Starcruiser adventure, we dined at the Captain’s Table. The Captain’s Table is an upcharge experience that must be booked in advance. It costs $30 per person and includes six courses.

Some of the food is the same served to everyone that evening, but the Captain’s Table is served extra courses. The additional courses include the First Taste, the Intermezzo, an extra protein, and the Decadent Finale, as well as champagne for the Captain’s Toast and a complimentary red or white wine pairing.

As we arrived to our table, we could see our place setting, which looked as exotic as the Halcyon itself.

Sitting at the Captain’s Table, we were given a special commemorative coin depicting the ship, along with the Halcyon logo.

The menu was shared by the whole table, as opposed to one for each passenger.

Several dishes over the course of the cruise include “red fruit,” the in-universe term for tomatoes.

The amuse bouche was fantastic. It has a texture similar to sushi, complimented with great flavors of ginger and wasabi. This is one of the dishes that is unique to the Captain’s Table. It’s fresh, palate-cleansing and bursting with sweetness, spiciness, and heat all at the same time.

The dumplings and sauces were very nice. All three were delicious.

Our group all had different favorites, so depending on your preference, you’ll find something good here.

with sweet and sour shredded chicken

Tip Yip Chicken is a reference to the breed that inhabits the forest moon of Endor, home of the Ewoks.

The tip yip was a personal favorite. It had sizably-portioned bits of chicken and a tangy sauce. It works great with the curry or the barbecue.

Banthas are the large furry creatures used as mounts on Tatooine, most recently seen in “The Book of Boba Fett.” They also produce blue milk.

The beef was rich and meaty and worked well with the Batuu spice sauce.

with potatoes and curry

The vegetable one had the most Indian spices. It worked great with the curry sauce as well as the Kaduu cream.

Clockwise from the top left corner:

Melahnese cuisine, from the Melahna system, is considered exotic and expensive in the Star Wars universe.

Kaadu are considered livestock on Padmé Amidala’s homeworld of Naboo and ridden by the Gungans, as seen in “The Phantom Menace.”

This was bland and slightly vinegary. It had a nice crunch, but overall, it was nothing special.

The miso soup was very tasty, but a bit overpowering on the soy sauce. There wasn’t really a good way to eat the tofu to combine it with the soup.

Whether you ate the tofu and then the soup or vice versa, you got this sort of bland fried taste from the tofu. There wasn’t a great way to eat them together.

This was perfectly tender. The beef melted in our mouth and the tamarind sauce gave an excellent tangy glaze to the very tender beef.

The potatoes that came with the beef were incredibly lumpy mashed potatoes, almost to the point of not being mashed potatoes at all. They had the same sauce as the beef and tasted fine enough, but there’s plenty of better fare for the main course to indulge in.

This tasted like a really mild General Tso’s chicken. It was good, but not remarkable. It had a very mild spiciness to it, with a decent sweetness and plenty of sesame seeds. It was very well-cooked, but not the biggest standout here.

with creamy sauce and sesame seeds

These had a crisp crust to them, but they were a little too salty. The creamy sauce was a nice accompaniment, giving a little tang to the plump and tender scallop.

This was a nice complement to the meat dishes, with a strong cilantro flavor. The rice was well cooked. It was al dente and not mushy, but also not undercooked. It didn’t stand on its own, but worked really well, especially with the shrimp.

Incredibly tender, this had perfectly-cooked shrimp. There was a good lemon and basil flavor to the sauce, which had a coconut milk base that gave it a great Thai sort of flavor, but without being too spicy.

The shrimp really stood out and the other flavors just serve to complement and elevate it.

Surabat is a settlement in the Surabat River Valley on Batuu, where the golden lichen grows.

These were pretty mediocre. They were nicely cooked and very crisp, but some might feel they’re a smidge undercooked. The harissa spice was disappointing, however. There was barely any spice. Overall, they were a little bland. It’s the least interesting thing on the main course.

The Jogan fruit is a round, purple fruit found throughout the galaxy. They are a common dessert ingredient, but can also be eaten raw.

Try the red stuff, it’s delicious! It was basically cocoa and a bit of berry/hibiscus flavor in a creamy mousse.

The larger blue dessert was very similar to the mousse on the lunch buffet, with a creamy berry filling inside the outer gel glaze. On the plate, the yellow dollops were a passion fruit cream.

The green pieces were a crunchy bite with a mild matcha taste. The gel dome had a very dense gel consistency without much flavor.

Umi-yumi is a traditional Gungan dessert from Naboo.

The round chocolate was the caramel version, though we didn’t really get any caramel taste. All we could get from it was a dark chocolate mousse flavor. Maybe it had a bit of some kind of liquor flavor, like an after dinner cordial, but not really caramel.

The other one was the yuzu, which we liked. It reminded us of a raspberry chocolate mousse.

We don’t know what kind of champagne this was but it was just fine.

Complimentary espresso, cappuccino, and lattes are available on request (you can order spiked versions as well at an additional cost).

Both of these are also available during Cantina Chronicles at Sublight Lounge.

This was basically just lemonade. It was the only one of the non-alcoholic cocktails that was actually drinkable.

This was terrible. Nobody in our group liked it. It was like a watermelon lemonade but with some bad flavoring — possibly the herbal garden blend.

This is a really nice cabernet. If you want a red wine in space, this one is a very pleasant option. Rich but not too heavy, nice deep berry flavor and slightly dry. It’s the perfect complement to the beef entree at either night of dinner in the Crown of Corellia.

We also got this drink at Sublight Lounge.

This was refreshing and beautiful. The fruit, ginger, and mint blended together to give the drink a sweet tang and herbaceous zest. It’s one of the better cocktails on the menu.

We had this drink at the lunch buffet first.

The peach is strong with this one. It has a really nice fruity flavor, but the bourbon still comes through as the base for this beverage. The orgeat adds just a hint of almond flavor, and the bubbles give only a bit of fizz that gives the drink an unexpected mouthfeel. The garnish is a very thin slice of dehydrated pineapple with a Luxardo cherry. This is the most expensive drink on the menu (we’re not sure why) but very tasty.

This is a basic gin and tonic, but not a very good one.

It looks lovely with the thyme sprig, but it has a bitter taste and nothing to elevate it beyond a basic drink.

We had this drink at the lunch buffet first.

This is very alcoholic. Mostly lime and vodka, the herbaceous orange liquor gives a very herbaceous flavor but not much orange. The peppercorns were actually just ground pepper (and very little of it). They did not impart anything to the flavor. Overall, it was okay, but we wouldn’t order it again. However, when we had this again at the Sublight Lounge (in order to get the souvenir cup), it was served with ice which was a big improvement.

This is a basic Manhattan. Like the other traditional cocktails, it didn’t stand out as anything beyond bourbon and vermouth.

This is a basic Old Fashioned. It’s an acceptable incarnation of the classic but there’s nothing special about it to make it stand out.

Looking for your favorite drink? A note at the bottom of the menu says you just have to ask. Rum, vodka, whiskey, bourbon, gin, tequila, and vermouth are always stocked.

As you may guess, Captain Keevan doesn’t really dine with you at the Captain’s Table. She visits for about ten minutes and it was the only awkward interaction we had on our trip. Story moments do play out near the table, like interactions between Lt. Croy and Gaya. There are tiny, supplemental extras on the menu but nothing significant. The food was a mixture of good and forgettable. Nothing was outright bad and the dinners are definitely better than the buffets. That said, we don’t think the Captain’s Table upgrade is worth it.

Gaya’s performance was awesome, which is another reason we don’t recommend the Captain’s Table. Half of the table faces away from the stage, and while Gaya moves around the room during the show, you still miss out on things like Ouannii playing the keyboard.