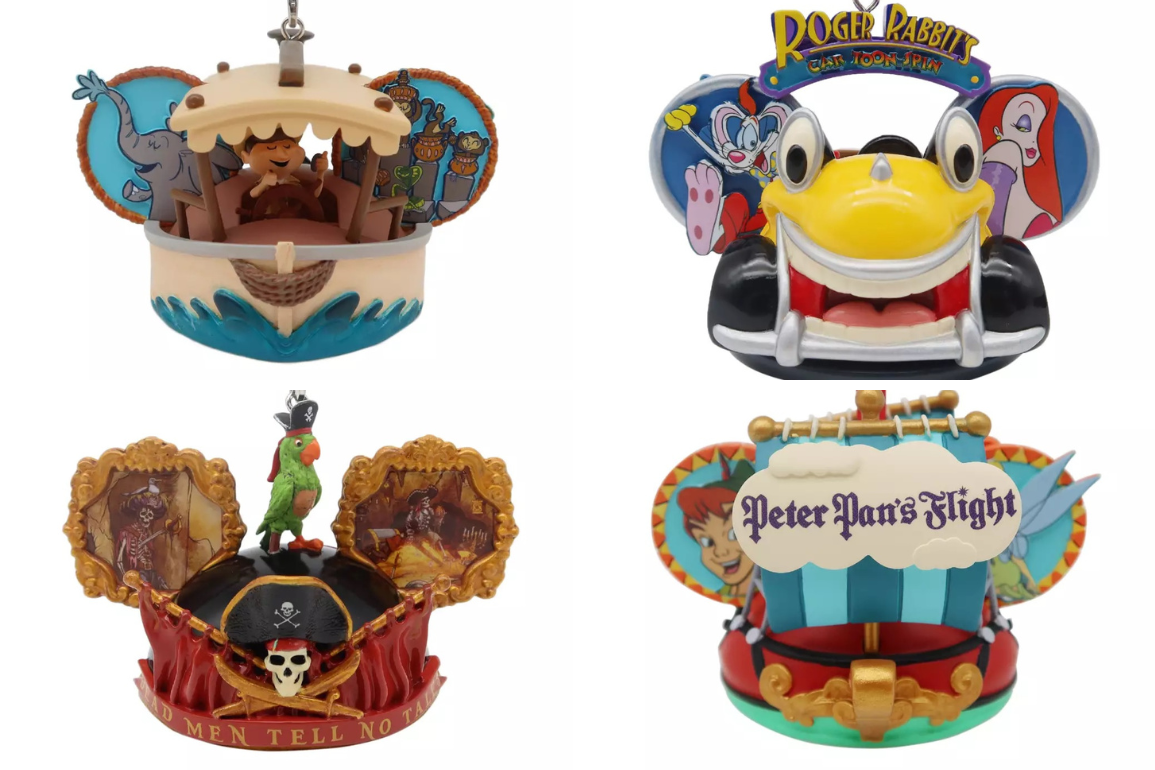 Some of the most beloved attractions in Disney Parks are the subject of a new bunch of ear hat ornaments now available on shopDisney. If you love turning your way through Toontown, sailing down exotic rivers, or flying to Neverland, these are for you!

This ornament features some of the stars of the world-famous Jungle Cruise, including a bathing elephant (trunks optional), a group of monkeys enjoying some local pottery, and a proud skipper at the helm of a boat.

The reverse features a friendly-looking hippopotamus and a gorilla trying on some new headgear.

The bottom, which features the signature of designer Costa Alavezos, shows off a pair of lit torches.

Benny the Cab speeds off on this ornament, while the ears feature Roger Rabbit and his faithful wife Jessica, who recently became a detective in the refurbished Disneyland attraction.

The reverse features Baby Herman (looking more adorable than irascible) and a member of the feared Toon Patrol.

The bottom shows off the gorilla bouncer of the Ink and Paint Club, looking as inviting as ever.

Take off for Neverland with this ornament, which shows off one of the pirate ships guests ride in this attraction, alongside Peter Pan himself and Tinker Bell.

On the back, Captain Hook grimaces as the crocodile shows off a toothy grin.

On the bottom, the Lost Boys can be found.

Meanwhile, the Barker Bird sits atop a skull crossed with swords on the Pirates of the Caribbean ornament, which also features art inspired by scenes shown early in the ride.

The back, which features the attraction’s name, also shows a quartet of rowdy buccaneers.

Finally, the Caterpillar vehicle from Alice in Wonderland is the star of this ornament, with Alice and the Mad Hatter appearing among colorful leaves on the ears, topped with the storybook seen outside the attraction.

The reverse side shows off two more Wonderland residents, the Cheshire Cat and the Queen of Hearts.

Tweedledee and Tweedledum appear on the bottom of this ornament.

Which is your favorite? Which attraction would you like to see next in the series? Share your thoughts in the comments!