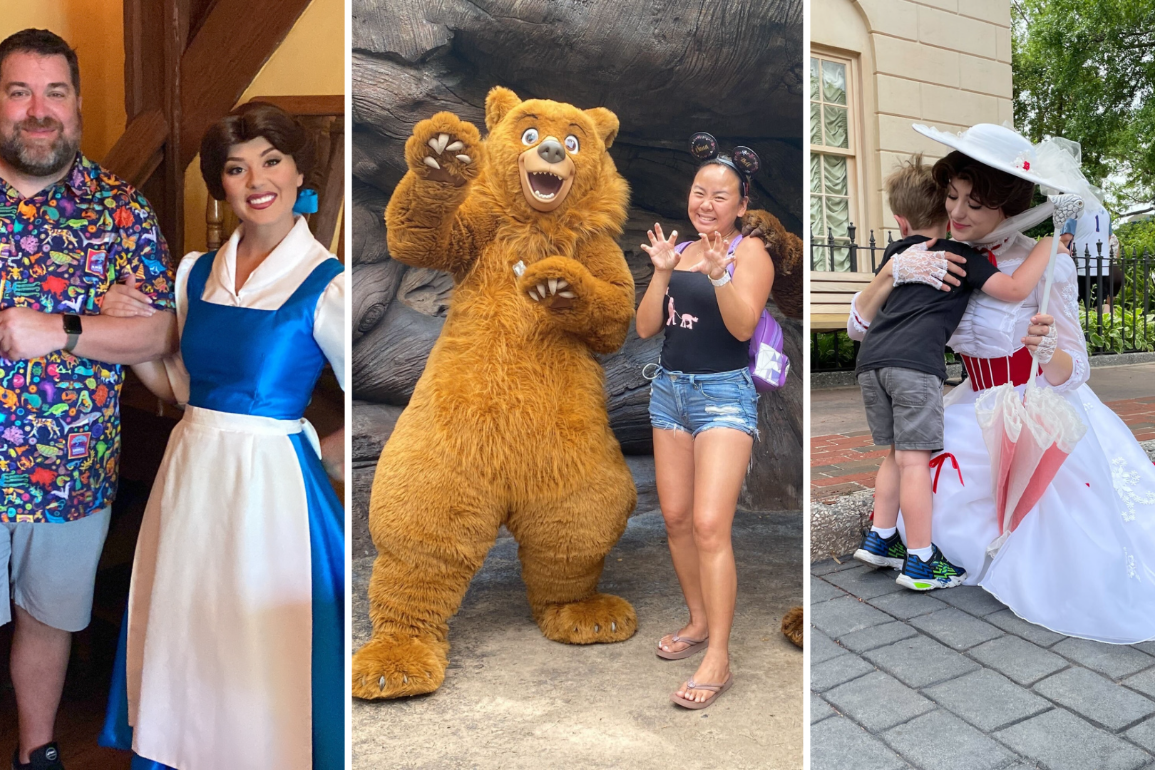 Walt Disney World Characters are no longer required to stay physically distanced from guests during meet-and-greets. This means that some characters are now meeting in slightly different locations. We also saw some rare characters at Disney’s Animal Kingdom. Let’s take a walk around the parks and see who is out!

Belle is now greeting guests inside her father’s cottage.

The cottage is part of the queue for “Enchanted Tales With Belle,” which has not run for the past two years due to physical distancing requirements.

Belle chatted with us for a few minutes and then posed for photos.

There was no PhotoPass photographer with Belle.

Chip ‘n’ Dale can currently be found in Storybook Circus.

Guests can once again approach the princesses in Princess Fairytale Hall, including Cinderella.

Over at Animal Kingdom, we met up with Russell and Kevin from “Up.”

Russell was happy to exchange hugs, though we think Kevin was jealous.

Koda and Kenai from “Brother Bear” made a surprise appearance too!

They are currently alternating with the moth from “A Bug’s Life.”

We found them near the Tree of Life.

The bears may just be appearing as part of Earth Week celebrations.

At EPCOT, Alice is still meeting outside the cottage in the U.K. Pavilion, but guests can once again approach her.

Mary Poppins was signing autographs and hugging guests in the courtyard of the U.K. Pavilion.

Our reporter’s child got to hug characters for the first time today.

Belle continues to greet guests outside the France Pavilion.

Guests can pose with Snow White at the wishing well outside the Germany Pavilion.

Anna and Elsa are meeting inside Royal Sommerhaus again.

Donald can be found to the side of the Mexico Pavilion in his sombrero.

Guests can meet up with Goofy and Pluto at the front of EPCOT.

Finally, we met Minnie and got her autograph at the gazebo near the beginning of World Showcase.

Other characters are popping up for non-distanced meet-and-greets throughout all four parks and at Disneyland Resort, and on Disney Cruise Line, so keep an eye out for your favorite!

At Animation Courtyard, guests could meet up with the iconic James P. Sullivan, better known as Sulley, from Pixar’s “Monsters, Inc.”

Pluto, meanwhile, was out and about in Animation Courtyard as well, near the Disney Junior Dance Party.

Fancy Nancy from the Disney Junior show of the same name was also out to say hello.

Are you excited to interact with Disney World characters like this again? Let us know in the comments!