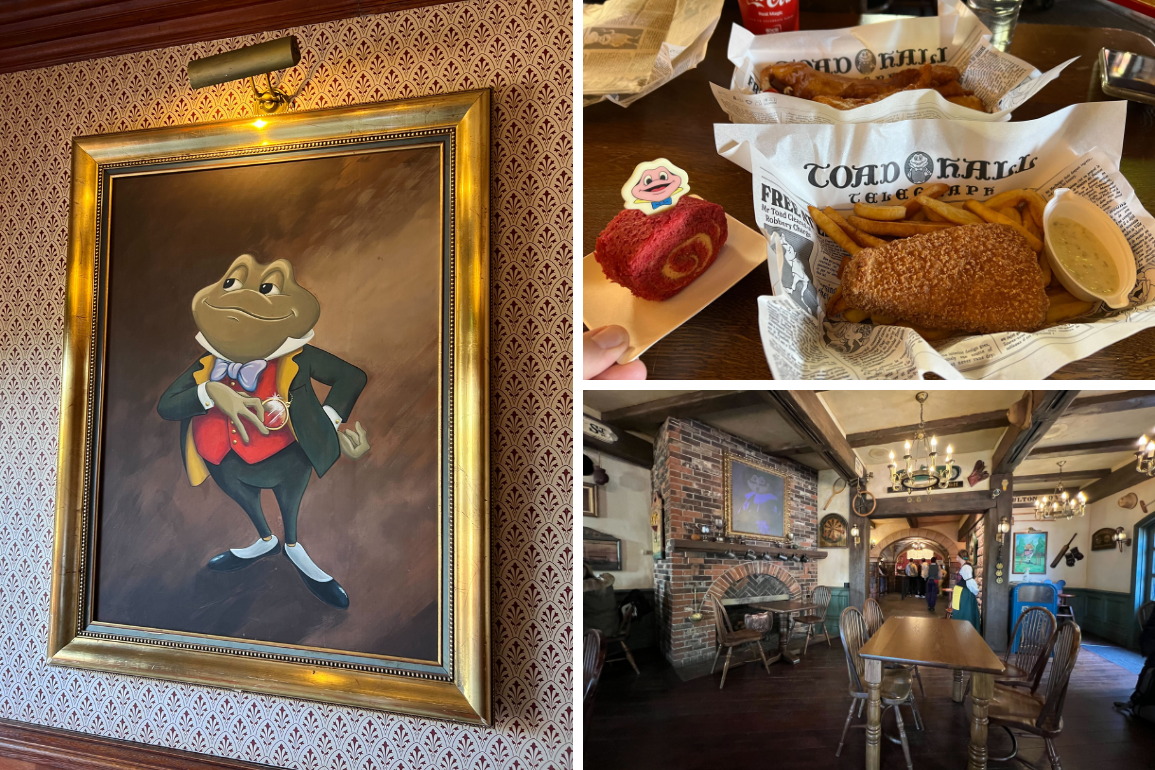 We’re celebrating the 30th anniversary of Disneyland Paris, and of course, we had to stop into the newly reopened Toad Hall Restaurant. Especially for fans of classic Disney, the ambiance is a can’t-miss experience. So let’s head on in and check out this returning classic!

The exquisite exterior brings to mind Toad Hall from the “The Wind in the Willows.”

The ornately decorated interior begins with a simple passageway into Mr. Toad’s home.

Ratty and Moley also make an appearance in his paintings. The wallpaper in this room even has a Mr. Toad pattern!

Other seating areas continue to stuff details in every nook and cranny, as Disneyland Paris is known for.

The order area follows more of a cellar look, with arches separating each order line.

Served with Tartar or Ketchup

This dish was reworked with a new recipe, which amounts to a new, doughier batter. There is less crunch than before, but it’s just as good, if not better now. The fish is of good quality, and the portion size is tremendous. It, of course, is served with “chips,” or what we would call steak fries in the US. The fries are well cooked, but they could use a little salt or malt vinegar to season them. The plate comes with ketchup or tartar sauce upon request.

The vegan offering is a fish substitute that probably would fool some of you if they didn’t tell you what it was. It indeed tastes like a lower-quality white fish with a very crispy fried exterior. We also ordered it with the vegan tartar sauce, which complemented it quite well. The delicious fries are included with this dish, too.

Based on our experience with the Magic Kingdom’s 50th anniversary Mr. Toad offerings, we were excited for this, but it ended up being one of the oddest desserts we’ve ever had. It was a soft, smooth cheese (lacking the sweetness you might have expected) and mixed with a red cake. The combination is odd, at least from an American perspective; it didn’t work for us. At least it’s cute.

Toad Hall Restaurant is one of the coolest spaces for a Disney fan to dine in. It is as if you are dining in the famous amphibian’s regal home, and the details reflect that. The recently added themed newspaper sheets that come with the entrees add another layer of detail. We even asked for some clean extras to take home as a souvenir, and the Cast Members were more than happy to provide them.

Would you dine at the Toad Hall Restaurant now that it’s reopened? Let us know in the comments below!